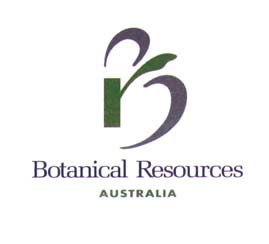 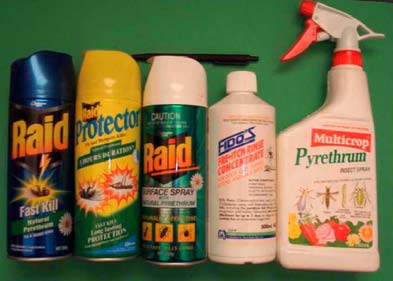 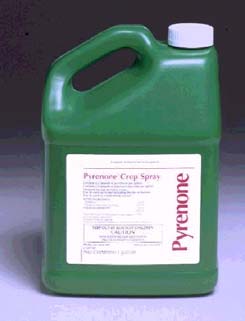 Natural Pyrethrum—Application Methods
Aerosols
This application is one of the best known for natural pyrethrum. It provides all the speed and knockdown required for a domestic use aerosol. In commercial aerosols which may be used in dairies or stables, larger quantities of Pyrethrins may be required especially if they are timed sequential aerosols. The early aerosols which were in use during World War II were heavy brass units which were designed to withstand the high pressure propellant. With the development of the lighter “beer can” aerosol which needed to with-stand the much lower pressures of Freon 11+12, the valves became less critical to plugging. Later, solvents and Freon were .
abandoned in place of water-based formu- lations propelled by propane-Butane .
mixtures. Some typical examples of . pyrethrum containing aerosols are shown (right). Most aerosols range in Pyrethrins Liquid Formulations
These formulations in the early days consisted of .
pyrethrum in kerosene. Many were unacceptable due to odour of the kerosene and flammability. Most .
formulations nowadays are based on emulsified pyrethrum in water. They may be used directly after dilution with more water or added to another formulation which .
Emulsified
contains a residual insecticide such as Permethrin. Some formulations are designed for this purpose alone and take advantage of pyrethrum’s power of flushing .
The formulation of aerosols and water emusifiable concentrates is a specialised technique requiring much expertise. Both “Natural Pyrethrum” and Piperonyl Butoxide, the synergist usually associated with it, are liquids and Piperonyl Butoxide has excellent solubility characteristics. 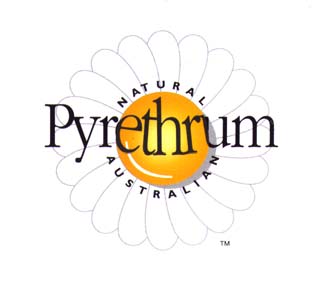 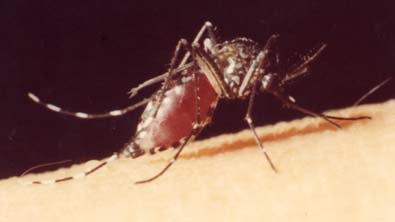 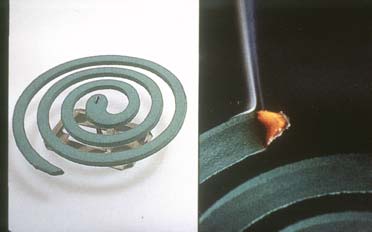 Powders or “dusts” have recently become more important because there is no need tobe involved in organic solvents or liquids which may have a relatively high vapourpressure.
The choice of a carrier for pyrethrum and Piperonyl Butoxide is critical. Clays which are suitable for certain insecticides are unacceptable for pyrethrum. This is because they will act as catalysts for oxidative breakdown of the pyrethrum. Indeed, materials such as low grade talcs which contain clays, should also be avoided. Precipitated silica also called Silica Gel, is an excellent stable carrier for pyrethrum and also has the advantage that it will desiccate insects by abrading the waxes on their cuticle. Mosquito Coils
Mosquito coils account for the greatest .
single use of insecticides. The estimated use of pure insecticide for coils in China is Aedes albopictus blood feeding
Pyrethrum has a long association with the formulation of mosquito coils. The action of the smoke from the coils has been well documented. But the most important effect is the ability in minute doses to inhibit food searching by the female mosquito.
Pyrethrum can be formulated into coil pastes as powders or emusifiable liquids before extrusion . The final concentration ranges from 0.1 to 0.3%. Some methods of manufacture call for a “blank” coil to be made and the pyrethrum post-applied as a solution or emulsion by means of a roller. This has the advantage of saving product in breaking during processing processing & some losses due to oven drying.
Other Applications
New applications are continually being developed all over the world addingto the ways in which Natural Pyrethrum can be used to control insects.
BOTANICAL RESOURCES AUSTRALIA PTY LTD
8 Gregory Street, Sandy Bay, Tasmania, Australia, 7005 www.botanicalra.com.au
Phone: 61 3 6224 4511 Fax: 61 3 6224 4473