Autonomous University of Barcelona, Spain Autonomous University of Barcelona, Spain National Science Foundation - BCS-0417429
NWO Rubicon fellowship for first author - 446-05-007
• “The process of adapting to or adopting practices of a culture different from one’s own”.
• Acculturation is usually measured with instruments that are culture-dependent (e.g., ARSMA).
independent measure of acculturation can be based on personal networks.
• Personal networks reflect both macro- and micro-level variations in adaptation to a host country – Macro: E.g., migration policy of the host country, similarity of cultural norms to those of the country of origin,.
– Micro: E.g., having employment, language • Three stages of acculturation
1: one dense cluster, largely consisting of
2: multiple clusters, some primarily from 3: the multiple clusters from stage 2 become • To develop a typology of the personal networks differ in years of residence in Spain • Snowball sampling; 294 immigrants in Barcelona from four migrant groups (for the Spanish part of the project) – 78 Senegambians; 70 Moroccans; 81 Argentinans; 65 Dominicans– 286 valid cases (8 cases were excluded from the analysis because they had missing data or were outliers on network characteristics) • Personal interviews were held; software Egonet was used to – 1. Characteristics of the respondent– 2. List of 45 alters (personal network delineation)– 3. Characteristics of each of the alters (network composition)– 4. Whether each pair of alters was related or not (network structure) • For each personal network (excluding ego), we • “Meta-analysis” over the 286 valid networks: – K-means cluster analysis based on various network characteristics (see next slide), to identify homogeneous groups of networks (“network profiles”) – ANOVA to see whether profiles differ in years of – Multinomial logistic regression to predict profile membership from years of residence controlled for background variables age, sex, country of origin, • Based on the network variables (all standardized): – 1. Proportion of alters whose country of origin is Spain– 2. Proportion of fellow migrants– 3. Number of clusters (“subgroups”) within the network– 4. Subgroup homogeneity regarding living in Spain– 5. Density– 6. Network betweenness centralization– 7. Average frequency of contact (7-point scale)– 8. Average closeness (5-point scale)– 9. Proportion of family in the network • Five-cluster solution was best interpretable• Characteristics that most contributed to the – density– homogeneity of the subgroups regarding living in Spain – percentage of Spanish in the network – Profile 1, “the scarce network”: N = 54 – Profile 2, “the dense family network”: N = 28 – Profile 3, “the multiple subgroups network”: N = 73– Profile 4, “the two worlds connected network”: N = 75– Profile 5, “the embedded network”: N = 50 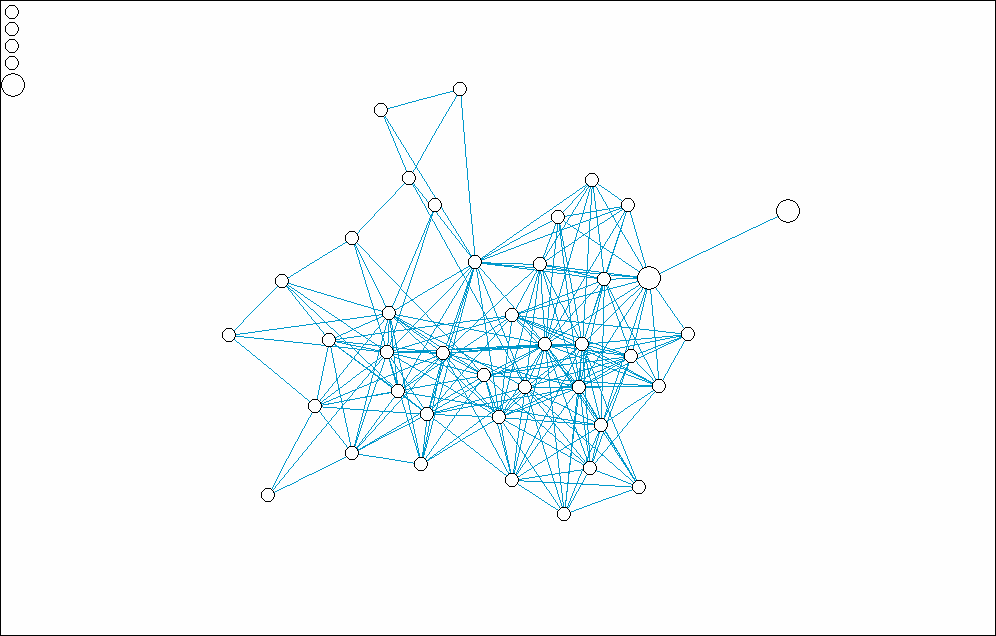 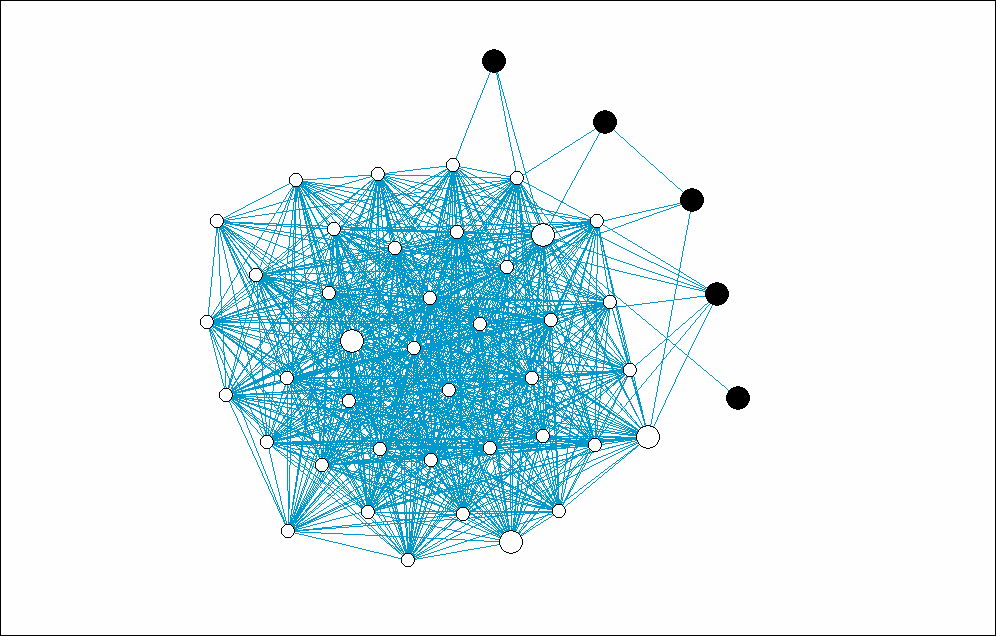 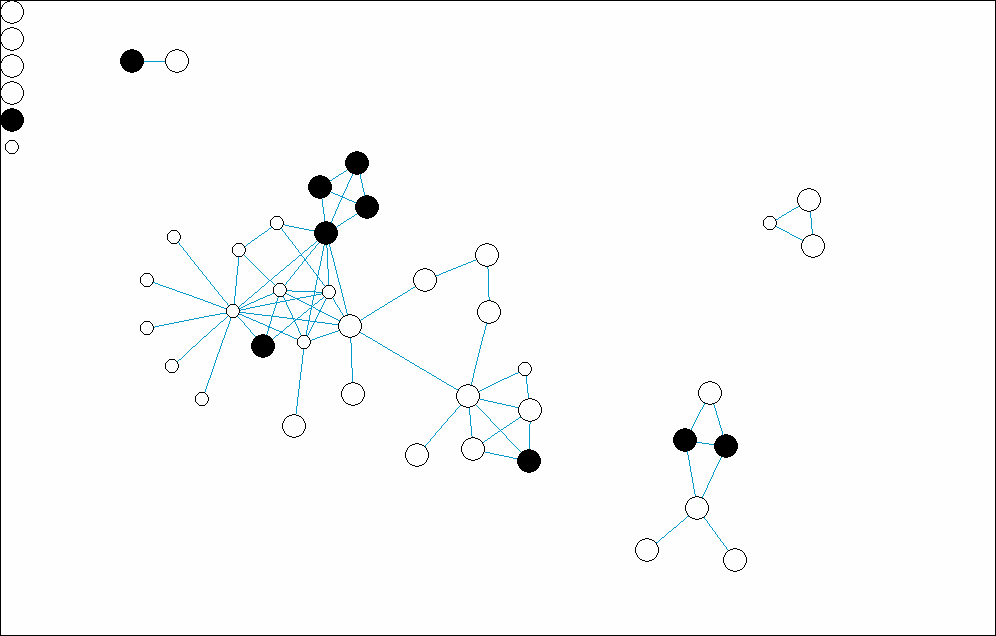 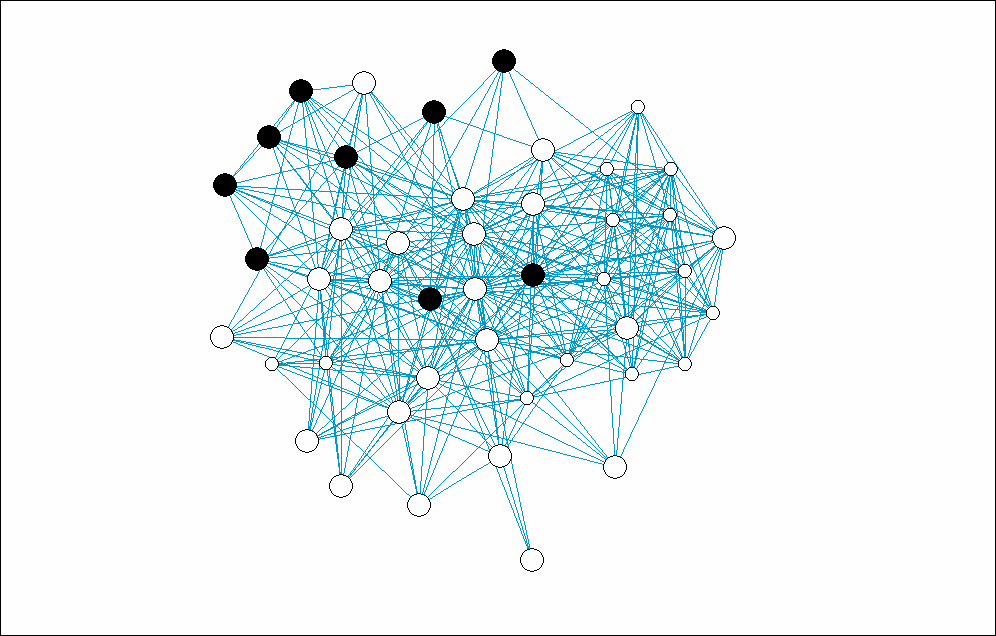 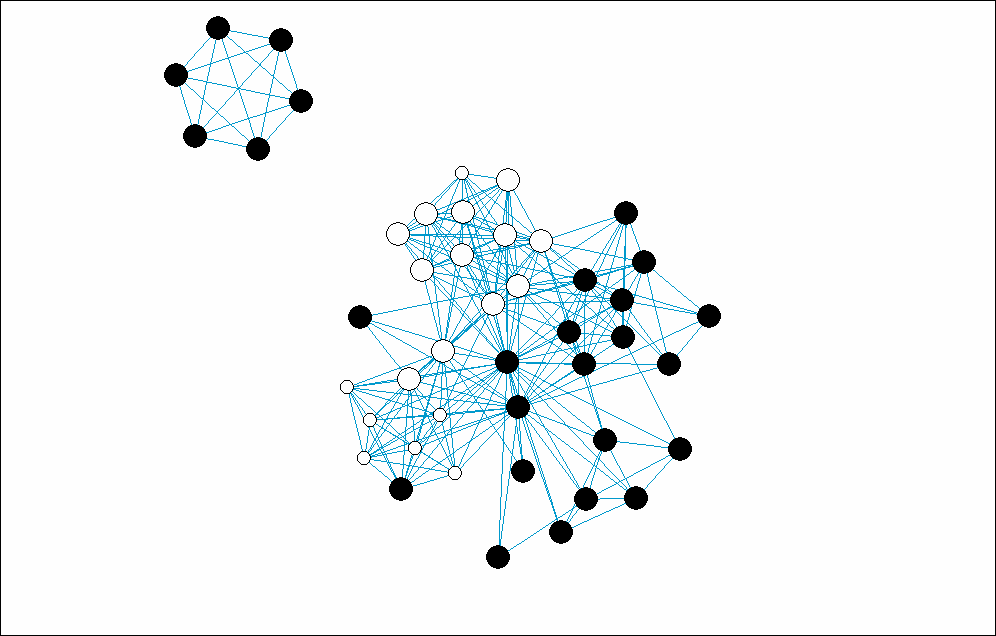 Color: country of origin (white = foreing, black = Spain); Size: country of living (large = Spain, small = other country) Overall:
Per profile:
significantly in years of residence: Profiles 1 and 2, versus Multinominal logistic regression
• Age and employment status did not have
• Sex and country of origin, however,
influenced profile membership significantly: e.g., Senegambians had a higher probability to have a “dense family network” than others.
• However, even controlled for these background characteristics, years of residence still predicts information about adaptation to a host country • The scarce network and the dense family network seem “transitional networks”, whereas the other three seem more settled. • To investigate how networks in each of the • To investigate whether there are different trajectories of network change, depending
on (e.g.) culture and entry situation
• We now perform a second wave as part of the ECRP Project “Dynamics of actors and networks across levels: individuals, groups, organizations and social settings”