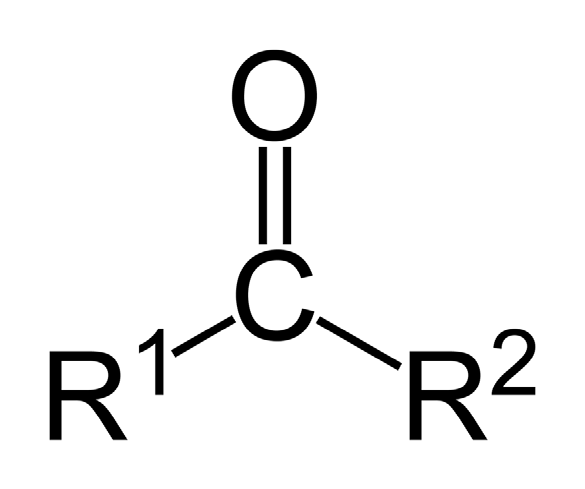 S.5D Wong Pui San Lau Ho Yin Leung Hau Lam Ketone  In organic chemistry, ketones and aldehydes have the same functional group, carbonyl group. But the carbonyl carbon atom in ketones is attached to two other carbon atoms.  Ketones that contain only one carbonyl group are called alkanones.  The general formula for alkanones is CnH2n+1COCmH2m+1, where m and n are positive intergers, like 1,2,3, etc, and could be equal to each other.  It features a carbonyl group (C=O) bonded to two other carbon atoms.  Many ketones are known and many are of great importance in industry and in biology. Examples include many sugars and the industrial solvent acetone.  The word ketone derives its name from Aketon, an old German word for acetone  According to the rules of IUPAC nomenclature, ketones are named by changing the  All alkanones are named by replacing the last letter ‘‘e’’ in the names of the parent  For propanone and butane, there is no need to add a number to specify its position because the carbonyl group must be attached to C2.  For alkanones with 5 more carbon atoms in the parent chain, it is necessary to add a number in front of the ending ‘‘-one’’ to specify the position of the carbonyl group.  acetone, a common solvent;  oxaloacetate, an intermediate in the metabolism of sugars;  acetylacetone in its (mono) enol form (the enol highlighted in blue); c  cyclohexanone, precursor to Nylon;  muscone, an animal scent;  Tetracycline, an antibiotic.  Ketones are trigonal planar about the ketonic carbon, with C-C-O and C-C-C bond  Ketones differ from aldehydes in that the carbonyl group (CO) is bonded to two carbons  In aldehydes, the carbonyl is bonded to one carbon and hydrogen is located at the ends of  Ketones are also distinct from other carbonyl-containing functional groups, such as  The carbonyl group is polar as a consequence of the fact that the electronegativity of the oxygen center is greater than that for carbonyl carbon.  Thus, ketones are nucleophilic at oxygen and electrophilic at carbon.  Because the carbonyl group interacts with water by hydrogen bonding, ketones are typically more soluble in water than the related methylene compounds.  Ketones are hydrogen-bond acceptors. Ketones are not usually hydrogen-bond donors  Because of their inability to serve both as hydrogen-bond donors and acceptors, ketones tend not to "self-associate" and are more volatile than alcohols and carboxylic acids of comparable molecular weights. These factors relate to pervasiveness of ketones in perfumery and as solvents.  A ketone that has an α-hydrogen participates in a so-called keto-enol tautomerism.  The reaction with a strong base gives the corresponding enolate, often by deprotonation  Ketones are classified on the basis of their substituents.  One broad classification subdivides ketones into symmetrical and unsymmetrical derivatives, depending on the equivalency of the two organic substituents attached to the carbonyl center.  Acetone and benzophenone (C6H5C(O)C6H5) are symmetrical ketones.  Acetophenone (C6H5C(O)CH3) is an unsymmetrical ketone.  In the area of stereochemistry, unsymmetrical ketones are known for being prochiral.  Many kinds of diketones are known, some with unusual properties.  The simplest is biacetyl (CH3C(O)C(O)CH3), once used as butter-flavoring in popcorn.  Acetylacetone (pentane-2,4-dione) is virtually a misnomer (inappropriate name) because this species exists mainly as the monoenol CH3C(O)CH=C(OH)CH3.  Its enolate is a common ligand in coordination chemistry.  Ketones containing alkene and alkyne units are often called unsaturated ketones.  The most widely used member of this class of compounds is methyl vinyl ketone, CH3C(O)CH=CH2, which is useful in Robinson annulation reaction.  Many ketones are cyclic.  The simplest class have the formula (CH2)nCO, where n varies from 3 for  Larger derivatives also exist.  Cyclohexanone, a symmetrical cyclic ketone, is an important intermediate in the  Isophorone, derived from acetone, is an unsaturated, unsymmetrical ketone that is the  Muscone, 3-methylpentadecanone, is an animal pheromone.  Ketones are pervasive in nature.  The formation of organic compounds in photosynthesis occurs via the ketone  Many sugars are ketones, known collectively as ketoses.  The best known ketose is fructose, which exists as a cyclic hemiketal, which masks the  Fatty acid synthesis proceeds via ketones.  Acetoacetate is an intermediate in the Kreb cycle which releases energy from sugars and  In medicine, acetone, acetoacetate, and beta-hydroxybutyrate are collectively called ketone bodies, generated from carbohydrates, fatty acids, and amino acids in most vertebrates, including humans.  Ketones are elevated in blood after fasting including a night of sleep, and in both blood and urine in starvation, hypoglycemia due to causes other than hyperinsulinism, various inborn errors of metabolism, and ketoacidosis (usually due to diabetes mellitus).  Ketones are produced on massive scales in industry as solvents, polymer precursors, and  In terms of scale, the most important ketones are acetone, methylethyl ketone, and  They are also common in biochemistry, but less so than in organic chemistry in general. The combustion of hydrocarbons is an uncontrolled oxidation process that gives ketones as well as many other types of compounds.  Although it is difficult to generalize on the toxicity of such a broad class of compounds, simple ketones are, in general, not highly toxic (for instance, the sugar fructose is a 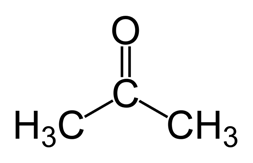  This characteristic is one reason for their popularity as solvents. Exceptions to this rule are the unsaturated ketones such as methyl vinyl ketone with LD50 of 7 mg/kg (oral).
Compounds:
1. Acetone a common solvent with the formula (CH3)2CO, a colorless, mobile,
flammable liquid, the simplest example of the ketones. Acetone is miscible with water and serves as an important solvent in its own right, typically as the solvent of choice for cleaning purposes in the laboratory. About 6.7 million tonnes were produced worldwide in 2010, mainly for use as a solvent and production of methyl methacrylate and bisphenol A. It is a common building block in organic chemistry. Familiar household uses of acetone are as the active ingredient in nail polish remover and as paint thinner. 2. Oxaloacetate forms upon oxidation of L-malate, catalysed by malate
dehydrogenase, and reacts with Acetyl-CoA to form citrate, catalysed by citrate synthase. It also forms in the mesophyll of plants by the condensation of CO2 with phosphoenolpyruvate, catalysed by PEP Carboxykinase. It can arise from pyruvate via an anaplerotic reaction. Oxaloacetate is also a potent inhibitor of Complex II. 3. Acetylacetone is an organic compound that famously exists in two tautomeric
forms that rapidly interconvert. The less stable tautomer is a diketone formally named pentane-2,4-dione. The more common tautomer is the enol form. The pair of tautomers rapidly interconvert and are treated as a single compound in most applications. It is a colourless liquid that is a precursor to acetylacetonate (acac), a common bidentate ligand. It is also a building block for the synthesis of heterocyclic compounds. 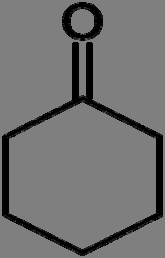 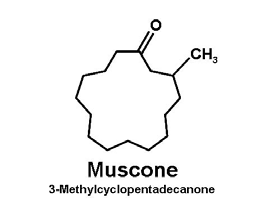 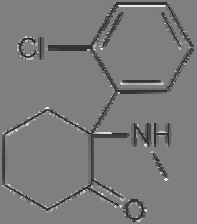 4. Cyclohexanone is the organic compound with the formula (CH2)5CO. The
molecule consists of six-carbon cyclic molecule with a ketone functional group. This colorless oil has an odor reminiscent of peardrop sweets as well as acetone. Over time, samples assume a yellow color due to oxidation. Cyclohexanone is slightly soluble in water (5-10 g/100 mL), but miscible with common organic solvents. Billions of kilograms are produced annually, mainly as a precursor to nylon. 5. Muscone is an organic compound that is the primary contributor to the odor of
musk. It consists of a 15-membered ring ketone with one methyl substituent in the 3-position. It is an oily liquid that is found naturally as the (−)-enantiomer, but synthetic material is typically a racemate. It is very slightly soluble in water and miscible with alcohol. Muscone is now produced synthetically for use in perfumes and for scenting consumer products. Misuse of ketone:
- Ketamine is a drug used in human and veterinary medicine. It produces a rapid
antidepressant effect, acting within two hours as opposed to the several weeks taken by typical antidepressants to work. It is also a popular anesthetic in veterinary medicine. However, some people take it as a habit. Chronic use of ketamine may lead to cognitive impairments including memory problems. Heavy ketamine users had impaired memory by several measures, including verbal, short-term memory and visual memory.