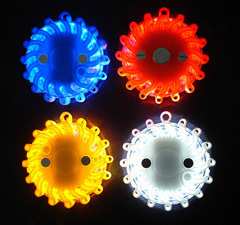 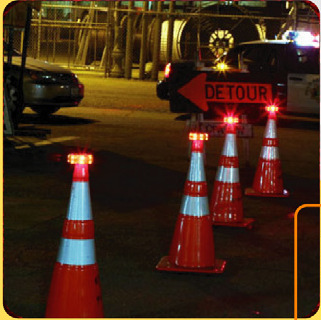 The LED Road Flare consists of 16 ultra-bright Light Emitting Diodes (LED’s) mounted in a ruggedized, waterproof
housing. The unit is powered by a CR123 non-rechargeable lithium battery which is easily replaced in the field and gives
up to 100 hours of light depending on which one of the 9 Flash patterns is selected. Flash patterns include SOS Morse
code, a solid on (lantern) mode and a flashlight mode.
The LED Road Flare emits light through a 360 degree lateral arc and is visible for 1000 metres at night.
The unit has a neodymium magnet in the base allowing it to be firmly attached to vehicles and other metal objects.
This revolutionary use of modern technology
brings an essential piece of equipment for
police, fire-fighters, first responders,
emergency medical and emergency rescue
response teams. LED Road Flares can be
used for traffic control, as a warning light, as a
rescue beacon, as a lantern in confined spaces
and so much more.
The units are watertight and non-reactive
making them suitable for use where old-
fashioned flares would be dangerous such as
in dry brush or where gasoline is present.
The LED Road Flare’s compact size makes it ideal for use on motorbikes where it can be stored in the small under-seat
space. It is easily stored in even the smallest motor vehicle taking up no more space than a pocket book.
The LED Road Flare is ideal for hikers and mountain climbers, being light and compact but rugged and reliable in times
of need. Many different sport activities such as skaters and roller-bladers, cyclists and runners will find benefit in the LED
Road Flare as it improves visibility on open roads at night and in the day time.
The LED Road Flare uses a lithium battery that will not leak. This gives the unit an impressive 10-year storage/shelf life.
Unlike flashlights with alkaline batteries or chemical light sticks, the LED Road Flare is intrinsically safe and can handle
extreme temperatures.
Technical specifications
1. Size is 110mm in diameter and 35mm in height.
2. Weight is less than 200 grams with battery included.
3. Battery: One CR123 lithium battery
4. External power requirement: None - device uses a non-
5. Shelf life: 10 years 6. Positive buoyancy and waterproof to 20m depth 7. Operation temperature range: -40°C to +100°C 8. Emissions: 360 degree LED array, solid state, no filament 9. Flash patterns: User selectable from 9 options 10. Maximum operation time: a. Continuous solid on: 8 hours b. Rotate: 15 hours c. Alternate: 10 hours d. Fast blink: 12 hours e. Slow blink: 100 hours f. Solid on Low: 60 hours g. SOS: 24 hours h. Flashlight two: 15 hours i. Flashlight four: 8 hours a. Complies with U.S. DOT Federal Motor Carrier Safety Administration b. Complies with U.S. DOT Manual on Uniform Traffic Control Devices (MUTCD) Section 6F.75 Lighting Devices and Section 6F.78 Warning Lights c. Designed to meet MIL-SPEC /MIL-STD 81 P.O.Box 3776, Durbanville, Cape Town 7551

ETHICAL AND OTHER CONSIDERATIONS INFORMING BEST PRACTICE ON HIGH COST TREATMENTS On 18th November 2008, the Specialised Healthcare Al iance1 held a conference on high cost treatments. This looked at the pressures on the NHS in its provision of such treatments and the consequences for patients. Presentations and discussion covered the ethical and clinical concerns around patient care, the

ECE 750 - T11: Component Based Software Systems Developing an Autonomous Mobile Robot: A Component Based Approach Introduction: Robotics is an emerging, multidisciplinary field lending itself readily to component based design including component based software systems (CBSS). By using CBSS, rapid robot development at a low cost is possible. However, in order to do so, a software fra