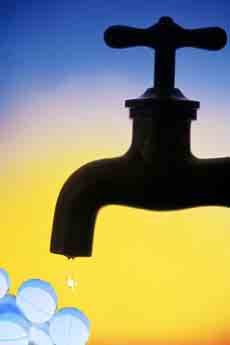 ------------------------------------------------------------- This story was printed from www.edie.net -------------------------------------------------------------
Industry urged to help track antidepressants in UK rivers
Published on 20-May-2005
URL: http://www.edie.net/news/news_story.asp?id=9962
Traces of the antidepressant fluoxetine, better known by its original brand name Prozac, could have reached Britain's lakes and rivers and be affecting aquatic wildlife according to the Environment Agency. The search is on for Prozac and other antidepressants in British rivers Now the agency is calling on the pharmaceutical industry to take a more active role in monitoring the level of chemicals in our waterways and, if necessary, help clean them up. It is asking companies that manufacture fluoxetine to undertake research to identify the effect the drug is having on the aquatic eco-systems of England and Wales. Last year British doctors issued over five million prescriptions for the drug, adding up to over four tonnes of the compound. While only a fraction of this amount will have reached the country's watercourses, the Environment Agency feels this could still enough to be cause for concern. "When people take pharmaceuticals like fluoxetine small quantities can be excreted," said Derek Tinsley, the agency's head of air and chemicals policy. "This, and the disposal of unwanted medicines down household drains, creates the potential for these substances and their breakdown products to enter sewage works and rivers. "Although our sewage treatment plants remove most of these products small quantities can remain in the effluent that is returned to the rivers and seas." The agency has stressed it does not believe there is any threat to humans but wildlife may be at risk. "We don't know how much fluoxetine is finding its way into the environment," said Mr Tinsley. "What we do know is that it's a widely used substance, it's toxic to wildlife at low concentrations and once in the environment it persists for quite a while. "Previous research backed up by our own initial calculations suggests that fluoxetine will not be at levels in our rivers high enough to kill aquatic life. "However, we are unclear about the longer term and subtle impacts such as effects on reproduction and growth that very low but continuous concentrations might have on our aquatic species. "That's why we are asking the manufacturers to undertake some research so that we can make judgements about the risk based upon sound science." Last August press claims Prozac had been discovered in the water supply were vigorously denied by the government's Drinking Water Inspectorate. It still maintains it is confident the water treatment systems already in place mean fluoxedine will not be found in drinking water. "As the EA report acknowledges, only small quantities of the fluroxetine taken as a medicine will be excreted," said Sue Pennison, a spokesperson for the DWI. "It goes on to report that the sewage treatment plant will remove most these products. "Any trace quantities remaining in the effluent will then be returned to rivers where further dilution and degradation will occur. "Many of the rivers where sewage effluent is discharged will not have drinking water abstraction "However some drinking water abstraction points will be downstream of discharges. "In these instances, even if the all the attenuating factors described above are ignored, concentrations in river water would be less than one part in a thousand million. "Realistically concentrations will be very much less than this because of the attenuation. "Ozone and carbon treatment are now installed at many water works in England and Wales to "It is apparent that this treatment is effective also against a wide range of other trace organic substances that may be present in source waters." The EA's new plea will add to concerns about the impact the pharmaceutical and manufacturing industries are having on water quality, with well-documented cases outlining the serious effect on wildlife of chemicals and hormones such as oestrogen being recorded in the UK's rivers (see related story). A spokesman for the agency said the call for industry help did not reflect any perceived increase in the problem, however, but purely that the research and monitoring tools were now in place to carry "Up until now we haven't had the science to do that," he told edie news. "Now there is a system in place which allows us to be confident in the results." He said the criteria about which pharmaceuticals were monitored was decided by a number of criteria, but the main factors were the level of threat posed and how widely used a substance is and fluoxedine had appeared as a blip on the EA's radar primarily due to the frequency with which the "If we do find the compound in the environment we will then need to see if it is having an effect," he said. "If it is then we would need to look at what we can do to reduce it." "We would look at ways we can work with industry to address the situation." by Sam Bond Faversham House Group Ltd 2005. edie news articles may be copied or forwarded for individual use only. No other reproduction or distribution is permitted without prior written consent.

Advances in psychiatric treatment (2009), vol. 15, 242–249 doi: 10.1192/apt.bp.105.001834Antiglucocorticoids in psychiatry† Sean A. McIsaac, Åsa Westrin & Allan H. Young Sean McIsaac studied for his endocrine tissue: the hypothalamus, pituitary and adrenal cortices are its major components. The Significant evidence has accrued suggesting that HPA axis is regulated by external i