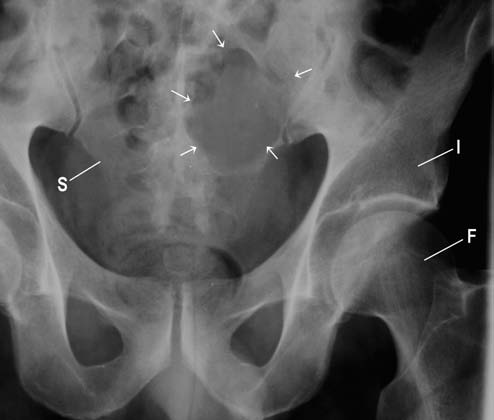 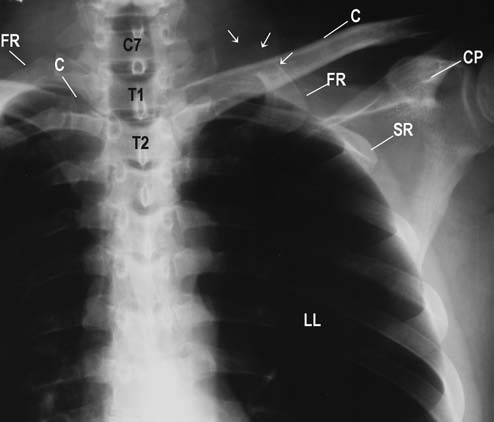 RADIOLOGY ROUNDS
RADIOLOGY ROUNDS
MARTIN QUAN, MD
Department Editor
A man with worsening sacroiliac
pain 3 months after a fall
James D. Collins, MD
A 72-year-old man came to the outpatient clinic with complaints of severe left sacroiliac pain. He hadfallen about 3 months earlier, and the pain he incurredthen had worsened over the past 2 weeks. He had a10-year history of myasthenia gravis for which he hadbeen treated with pyridostigmine bromide (Mestinon)that provided symptomatic relief. Findings of the physical examination were general- ly within normal limits. He reported pain over his leftfirst rib and left sacroiliac region. He had no abdomi-nal masses, and digital rectal examination showed thathis prostate was of normal size. In the first stage of the workup, radiographs were done of the chest, pelvis, and left first rib. Because oflytic defects in the sacrum and left posterior first rib, abone scan and percutaneous biopsies under fluoro-scopic control were ordered. Scheduled laboratorystudies included a urinalysis, acid phosphatase and Figure 1 This anterior posterior radiograph of the pelvis displays
prostate-specific antigen (PSA) levels, and, if indicated, lytic destruction (arrows) of the left sacrum (S). F = femur; I = ilium.
The radiographic findings
An anteroposterior (AP) radiograph of the pelvis displayed a large lytic defect in the left sacrum (Figure1). A coned-down posteroanterior (PA) chest radio-graph of the left shoulder revealed near complete lyticdestruction of the proximal left first rib (Figure 2). Abone scan (Figure 3) demonstrated increased isotopeuptake in the region of left posterior first rib and mini-mal but increased activity in the area of the left sacrumand at approximately the level of T12. Such scans areoften used to indicate the safest site for percutaneousbiopsy.1 A prone pelvic radiograph, with the Craigbiopsy needle in place, displayed a compression frac-ture at L4 (Figure 4). The left pedicle of L4 is destroyed,with an associated loss of height of the vertebral body.
Figure 2 This coned-down anteroposterior chest radiograph dis-
Dr. Collins is professor, department of radiology, David Geffen School of plays lytic destruction (arrows) of the left first rib (FR). C = clavicle; Medicine at UCLA. Dr. Quan is professor of family medicine, departmentof family medicine, David Geffen School of Medicine at UCLA. He is also CP = coracoid process; C7 = 7th cervical vertebra; LL = left lung; SR editor in chief of Family Practice Recertification.
= second rib; T1 and T2 = 1st and 2nd thoracic vertebrae.
14 • FAMILY PRACTICE RECERTIFICATION 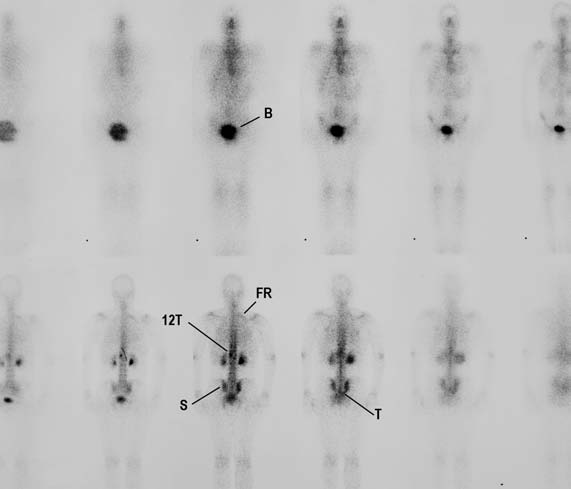 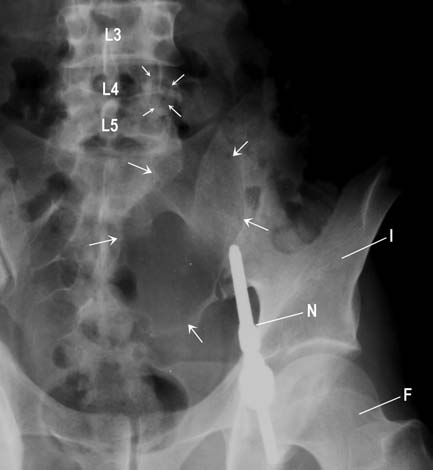 RADIOLOGY ROUNDS
Figure 4 This prone posteroanterior radiograph documents
Figure 3 In this technetium 99m methylene diphosphonate (99m Tc MDP)
the fixed position of a Craig biopsy needle (N) over the lat- whole-body bone scan, the upper level displays anterior images; the lower level, eral margin of the lytic lesion (large arrows) in the left posterior images. Observe landmark anatomy of the bladder (B) in the upper sacrum, and lytic destruction of the left pedicle (small ar- level and increased uptake over the region of the left first rib (FR) and 12th tho- rows) of the compressed 4th lumbar vertebra (L4). F = racic vertebra (T12), and tumor destruction (T) of the left sacrum (S) in the lower.
femur; I = ilium; L3 and L5 = 3rd and 5th lumbar vertebrae. The differential diagnosis included metastatic carci- noma to bone, with prostate carcinoma as the most • Prostate Unlike breast metastases, nearly all from probable primary site, or metastasis from primary renal cell carcinoma. The histologic picture was most • Lung Second to prostate as the source of metastases consistent with metastatic adenocarcinoma from pri- in men, these lesions are almost always osteolytic.
mary prostatic carcinoma, which was the opinion of • Kidney Metastases of renal cell carcinoma are typi- the consulting pathologists and is rapidly fatal. PSA cally osteolytic and may cause marked expansion of the affected area. They are usually responsible for soli-tary (and no more than six) bone metastases.
Discussion
Most bony metastases found during routine exam- Take-home message
inations originate in the breast or prostate. Metastases This patient’s disease was not suspected, and he did in bone from the kidney are also common, but these not have a prostatic disease workup, which is usually primary tumors are relatively rare. The lungs are the done soon after the diagnosis of prostate cancer to de- source of the third most common primary tumors termine the risk of metastases or to stage metastatic metastasizing to bone. Other cancers likely to metas- prostate disease. His pain required a baseline plain tasize to bone are thyroid and kidney. Metastatic tu- film that detected lytic lesions. The technitium bone mors are more common than primary tumors in bone.
scan was selected because it is the most reliable and The appearance of metastases is variable. They may least expensive choice to detect lesions not displayed be osteoblastic, osteolytic, or a combination of the two.
The great majority of metastases are osteolytic; thosefrom the prostate and bladder are usually osteoblastic.
REFERENCES
A summary of common metastatic characteristics2: 1. Collins JD, Bassetet L, Main GD, et al. Percutaneous biopsy following positive bone scans. Radiology 1979;132:439-442. • Breast Nearly all are osteolytic, with lesions almost 2. Meschan I. Radiolucent bone diseases of multiple extremeties invariably multiple and several centimeters in diame- or regions. In: Synopsis of Analysis of Roentgen Signs in Gen- ter. About 10% of breast carcinoma metastases are os- eral Radiology. Phildelphia, Pa: WB Saunders; 1976:79.
VOL. 29, NO. 6, JUNE 2007 • 15

Collagen Induction Therapy ~ Consent FormYou must be 18 years of age to be treated with Collagen Induction Therapy (CIT) , or have a parent or legal guardian sign the form with you, giving consent for the treatment. Please initial that you have read each of the below statements:_____ You have the right to be informed about this treatment and decide whether or not to proceed. _____ Photos may