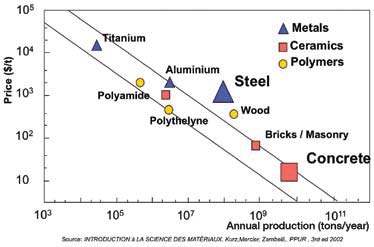 Straight talk with Karen Scrivener
on cements, CO and sustainable
development
Editor’s note: Over the last few years, I have run into a chorus of stories in both the technical and mainstream press bemoaning the carbon diox-ide emissions of the cement and concrete industries. It seemed that the Question: The production
“accepted wisdom” was that something was amiss, and the implication was that cement and concrete production needed, well, to be “fixed.” It was a revelation, then, last year when I met Karen Scrivener, a profes- sor at the Swiss Ecole Polytechnique Federale (Lausanne) who was delivering the Della Roy Lecture at the 2011 Advances in Cement-based Materials: Characterization, Processing, Modeling and Sensing meeting. I learned first hand that Scrivener, a founder of a Europe-based collabora- tion between institutions and industry focusing on strategic problems (Nanocem), is a dynamic and articulate expert on cement and concrete. Scrivener: A lot of people say, “Oh, we shouldn’t
use concrete. We should be using something else.” More importantly for me, she was the first person I have heard present an aggressive, well-rounded and compelling defense of the critical This is a totally meaningless comment, because it role of concrete… and at the same time sketch out a realistic set of is just not physically possible to produce any other pathways for materials scientists and engineers to reduce cement’s CO material in such large quantities. That’s because of footprint while increasing concrete’s availability. Read our Q&A and see the distribution of resources on Earth. This to me is a Concrete is the most used material in the world. Looking forward, especially to the developing regions of the world, it is the only material that can satisfy Concrete: The most used material in the world . . .
the demand for decent low-cost housing and infra-structure. Also, concrete is relatively environmentally friendly as measured by CO emissions per ton, which But, it’s wrong to think there is or could be some competition with wood. The usage of wood world-wide is estimated to be well above replanting levels, so we cannot substantially increase the amount of wood used. Also, while it may be a viable material in temperate climes, in large parts of Africa, India and Asia, there are no significant reserves. There is no way for the Earth to produce enough wood to make any significant replacement of concrete.
Q: So, you are saying there really is no viable
A: Yes, and if you use any alternative to concrete,
you are going to make things worse. Therefore, the . . . and the only material which can satisfy the demand for decent only route we have is to make concrete better.
Q: Is part of the problem that people in the devel-
oped countries don’t grasp what role concrete plays American Ceramic Society Bulletin, Vol. 91, No. 5 | www.ceramics.org 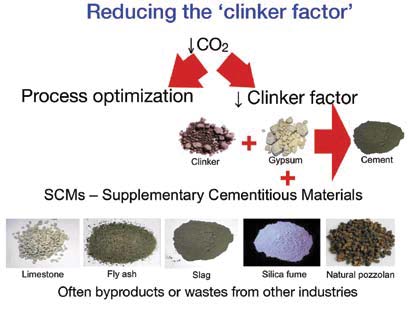 Straight talk with Karen Scrivener on cements, CO and sustainable development A: Absolutely not. There is a lot
that we can do, even with what might appear to be small gains. For example, if we could even save 5 or 10 percent CO on every meter of concrete, it is orders of magnitude more important. In fact, a 10-percent saving in the CO associated with a cubic meter of con-crete, which is eminently doable, would be equivalent to removing all the CO emissions associated with steel produc-tion. That shows how much impact we can have by research to increase the sustainability of cement and concrete. Q: Can you explain a little more
about your earlier comments about cement composition having to be of cement. It’s not by coincidence that A: Sure. Only eight elements—oxy-
A: I think so. We all want to have
like that, but it’s a fact, and we have to deal with it. We can’t afford to be like ostriches and stick our head in the sand looking at materials that are not widely tion of calcium carbonate. In fact, this ent cost structures, and you will quickly doesn’t stay in China or Africa. It goes are only available in some countries but cally evaluate all possible solutions.
Q: Every so often we see an
process optimization. It’s worth noting Q: But, we even hear our colleagues
A: Well, let me first say that many
calculations. In fact, the production is A: Yes, even after my lecture at the
that only addresses “the tip of the ice- from waste sources, so we are efficiently crous, because, like it or not, Portland Q: But you are not saying that noth-
also efficiently decomposing toxic (organic) materials because of the high www.ceramics.org | American Ceramic Society Bulletin, Vol. 91, No. 5 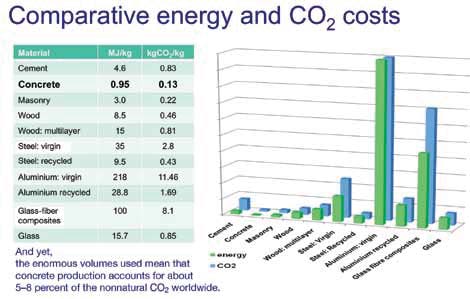 the clinker factor. This means, instead of making cement out of grinding clin-ker and gypsum, we add more and more of what are known as supplementary cementitious materials. These are often byproducts or waste products from other industries, such as fine limestone, fly ash, blast-furnace slag, silica flume and natural pozzolans.
and successful strategy. So, at least in Europe over the past 20 years or so, manufacturers have reduced the amount of clinker in their cements down to below 75 percent in preblend- ed cements. In other words, they suc-cessfully substitute 25 percent of clinker Q: What about in the US?
A: The US goes against this trend,
sustainability routes in parallel, then I Q: Can you mention more about
Q: So is expanding the use of these
available materials. In order to be able to do this, we have to provide end users A: If we think in terms of miner-
A: This is quite a difficult strategy,
(the mineral name is ye’elimite). These ash—we’ve all heard about fly ash, and 40 percent less. They are also formed at types of cements currently being studied percent. But, say, if you are going to put the time it takes to initially set can be you are back to the same levels again.
Q: So where are SCMs going to
we expect structures to last 40–50 years A: I think we see more and more
see more calcined clays and pozzolans.
means is that we are going to see a very ticularly on microstructure. In fact, we American Ceramic Society Bulletin, Vol. 91, No. 5 | www.ceramics.org 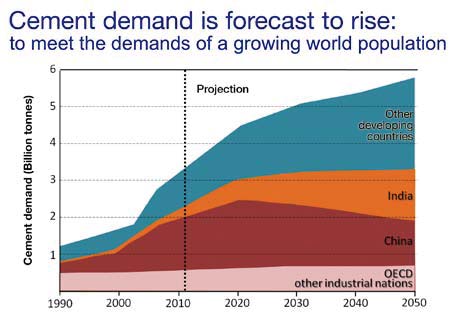 Straight talk with Karen Scrivener on cements, CO and sustainable development In all, there are 11 industrial partners and 22 academic partners in Nanocem, and, by building this consortium, we are bringing about a paradigm change in what type of research can be done.
Q: Are there specific research goals
A: Yes. The first thing we want to
predict with our research is how these materials harden. The second stage of the process, equally important, is pre-dicting how the material will perform over the lifetime of the building or the structure in which the concrete is used. Typically we are talking about lifespans of 50–100 years. Field research isn’t very practical, so we have to use the predictive methods coming out of materials science.
miraculous material—if you think about jointly addressing the question of water it, you just mix in water and leave it at material—but we don’t actually under- cesses. I think we are making very rapid the past five years than in the previous Q: Are some people surprised by the
A: Well, business is business, as they
rial that is easy to study, but slag isn’t reducing CO , because there is so little the public relations budgets of, say, the replacement rates, but that availability is very localized. And, in the long term, cheap. You can still get a ton of cement have five of the world’s top six cement Q: Your talk at the cements meet-
them is paying only for part of it, then A: What we really need to do is to
can underwrite part of this research.
www.ceramics.org | American Ceramic Society Bulletin, Vol. 91, No. 5

Version 8 of Icon for MS-DOS Department of Computer Science, The University of Arizona 1. Introduction Version 8 of Icon for MS-DOS should run on any computer running MS-DOS 3.0 or higher. Math coprocessorsare supported and used if present; otherwise software emulation is used. Approximate 500K of free RAM is neededto run Icon satisfactorily. Two versions of Icon’s executor system are pro

by Laura Poole Ever since I was an infant, I had asthma and severe allergies. When I turned 7 years old, the doctors started treating me for my allergies intensively. They would give me shots of each allergen, such as down, dust, pollen, mold, cat, and dog. They also gave me a bee test. It turned out I was allergic to all. This testing was done every six months and the testing itself would