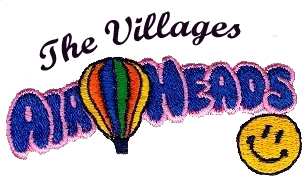 Members of the Villages Airheads meet in the Mulberry Grove Recreation Center’s Old
Glory Room, 8445 SE 165th Mulberry Lane, on the second and fourth Tuesday of each
month, 10:00 – 11:30 am. Mark your calendar. Please come to our meetings and bring
your spouse or a friend! NO MEETING ON DECEMBER 25TH
BREATHING & EXERCISE CLASSES – December 7th & 21st

These classes are held on the 1st & 3rd Friday of each month 10:00 – 11:30 a.m. in the same
location as above. Come to exercise and learn how to relax and breathe efficiently. Don’t
ever have another panic attack!
GUEST SPEAKERS
December 11th – Christmas Party – Y’all come!
December 25th – NO MEETING – Merry Christmas!

IMPORTANT WEBSITES & PHONE NUMERS
Clinical Trials - http://clinicaltrials.gov/ct2/home
COPD Foundation - http://www.copdfoundation.org
COPD Foundation Information Help Line - 1-866-316-2673 (toll free)
EFFORTS - http://www.emphysema.net/default.asp
John Goodman’s GREAT COPD Articles - http://www.oxyview.com/
Pulmonary Paper – http://www.pulmonarypaper.org
Pulmonary Fibrosis Help Line – http:// www.pulmonaryfibrosis.org/onlinesupportgroups
Sea Puffers Travel - http://www.seapuffers.com/
Transtracheal Systems – http://www.tto2.com
The Villages Airheads – http://www.thevillagesairheads.com
One fine day in ancient Rome, Julius Caesar turned his attention to a problem plaguing his mighty empire: laundry. Getting all those white togas clean was a constant pain. He also had some weird ideas that if he could get the togas stiff enough, they would be like a light coat of armor. not enough to last through a sustained battle, but enough to ward off an assassin's arrow. He figured the easiest way to get this done on a large scale would be to dump a bunch of detergent into a tidal pool, and dump the togas in afterwards. (This was two thousand years ago. the environmental movement was restricted to a few druids here and there). The gentle motion of the tides would wash the dirt out. Afterwards, all that would have to be done would be to throw some starch in, and then pull the toga's out to dry. He assigned this task to some of his scientists and engineers. They started executing his plan, and all was going well until they threw in the starch. The goddess of nature, angered at the environmental destruction, caused a huge tidal wave to spring up and wash over the assembled workers. A stiff breeze afterwards dried them off so quickly they were all frozen into place. After a little while, Caesar began to wonder about the progress of the enterprise, so he decided to visit the site with some of his advisors. Arriving at the tidal pool, he was unable to make heads or tails of the sight of his workers stuck standing there. Until of course, one of his advisors whispered to him: . . . "Beware, the tides of starch." IMPORTANT STUDY from Pam DeNardo, COPD Foundation
A study led by researchers at Boston University School of Medicine (BUSM) has shown that a compound used in some skin creams may halt the progression of emphysema and reverse some of the damage caused by the disease. When the compound Gly-His-Lys (GHK) was applied to lung cells from patients with emphysema, normal gene activity in altered cells was restored and damaged aspects of cellular function were repaired. The study, which is published in BioMed Central's open access journal Genome Medicine, also demonstrates the potential impact of using genomic technologies to identify new possible treatments for diseases using existing drugs and compounds. Click below to see full article: http://www.medicalnewstoday.com/releases/249779.php
REST IN PEACE
The last month has been a tough one with the reported losses of Airheads Sandy Grella,
Sandy Tuman, Harry Honan, and Ed Hefferon. All are at peace but will be sorely missed.
We wish the families comfort.
Sandy Grella was the immediate past president of the Airheads and gave tremendous
support to the organization for many years as a member of the Don’t Become an Airhead
Team and as the Sunshine Lady. She and her wonderful husband and caregiver, Clem,
also served on the Airheads Scholarship Committee, The Airheads Joyride Committee,
and the tri-county Board of Directors of Directors for the American Lung Association.
SUGGESTED SEQUENCE FOR USE OF MULTIPLE INHALED MEDICATIONS
If using BOTH Short & Long-acting
If Using ONLY Long-acting Medications
Medications
FIRST (see Note 3)
Long-acting β-agonist (alone or combined)
Long-acting β-agonist (alone or combined)
Foradil (formoterol), Performist (formoterol) Foradil (formoterol), Perforomist (formoterol) Duova (formoterol & tiotropium bromide) Duova (formoterol & tiotropium bromide) Seretide (salmetrol & fluticasone) Seretide (salmetrol & fluticasone) Symbicort (formoterol & budesonide) Symbicort (formoterol & budesonide) Long-acting Anticholinergic
Long-acting Anticholinergic
Aerobid, Aerospan HFA (flunisolide) Aerobid, Aerospan HFA (flunisolide) Flovent, -HFA, -Diskus (fluticasone) Flovent, -HFA, -Diskus (fluticasone) (1.) Take short-acting drugs at least 2 hours
Short-acting β-agonist (alone or combined)
before long-acting drugs in the same class to avoid interfering with the long-acting drug's action. (2.) If albuterol is used on a regular scheduled
Basis, always take it after the long-acting β-agonist, and never less than 2 hours before it. Medihaler-Iso, Isuprel (isoproterenol) (3.) If you must use albuterol on a "rescue"
basis, then wait two hours before taking a Ventolin, Airomir (Canada) (albuterol) (4.) If Atrovent is used in addition to Spiriva/
Combivent (Atrovent & albuterol) (see note 4) Tiova, always take it after the Spiriva/ Mark Mangus, BSRC, RPFT, RRT
Tiova, and never less than 2 hours before it. 3/27/2006 (Rev2: 7/17/2007)

WELCOME NEW MEMBERS
Walter Berg, Kitty Hayes. Deborah Harkleroad, Lloyd & Monique Herlocker, Dr. Robert
Houseknect, Don & Jan Nine, and Roy Sullivan.
FOURTH ANNUAL AIRHEADS CRUISE
Our Fourth Annual Airheads Cruise, a seven-night Western Caribbean itinerary aboard
Holland America's ms Ryndam sailing from Tampa on Sunday, March 3, 2013. Our
favorite Respiratory Therapists and Travel Agents extraordinaire, Celeste Belyea and
Holly Marocchi are waiting to book you and to make arrangements for your oxygen needs
at 1-866-673-3019! Ask your friends to join us for a GREAT time!
FOR SALE - $2400 Or Best Offer
SEQUAL ECLIPSE 3 with AUTOSAT – Portable O2 Concentrator (POC) The Unit Includes: One Rechargeable Power Battery, AC Power Supply with NEMA Power Cord, DC Power Supply, Continuous Flow Mode and Pulse Mode Operation, Universal Cart, SeQual Limited Warranty Purchased new in the fall of 2011 and used for one 2.5 hr. flight and for 5 nights. Patricia Hefferon - 262-853-3453 - [email protected] COPD AWARENESS
November was COPD Awareness Month. Hopefully, all of you signed on to send letters to our elected officials on COPD issues. If not, please sign on to the site below and do so. If we all join the fight to find a cure for COPD, it can make a difference. Thank you. http://www.capwiz.com/copdfoundation/home/
AIRHEADS WEB SITE
Thanks to the efforts of Joyce Huskey, you can now visit our web site at:
http://www.thevillagesairheads.com
Check it out. Thank you again, Joyce for a GREAT job.