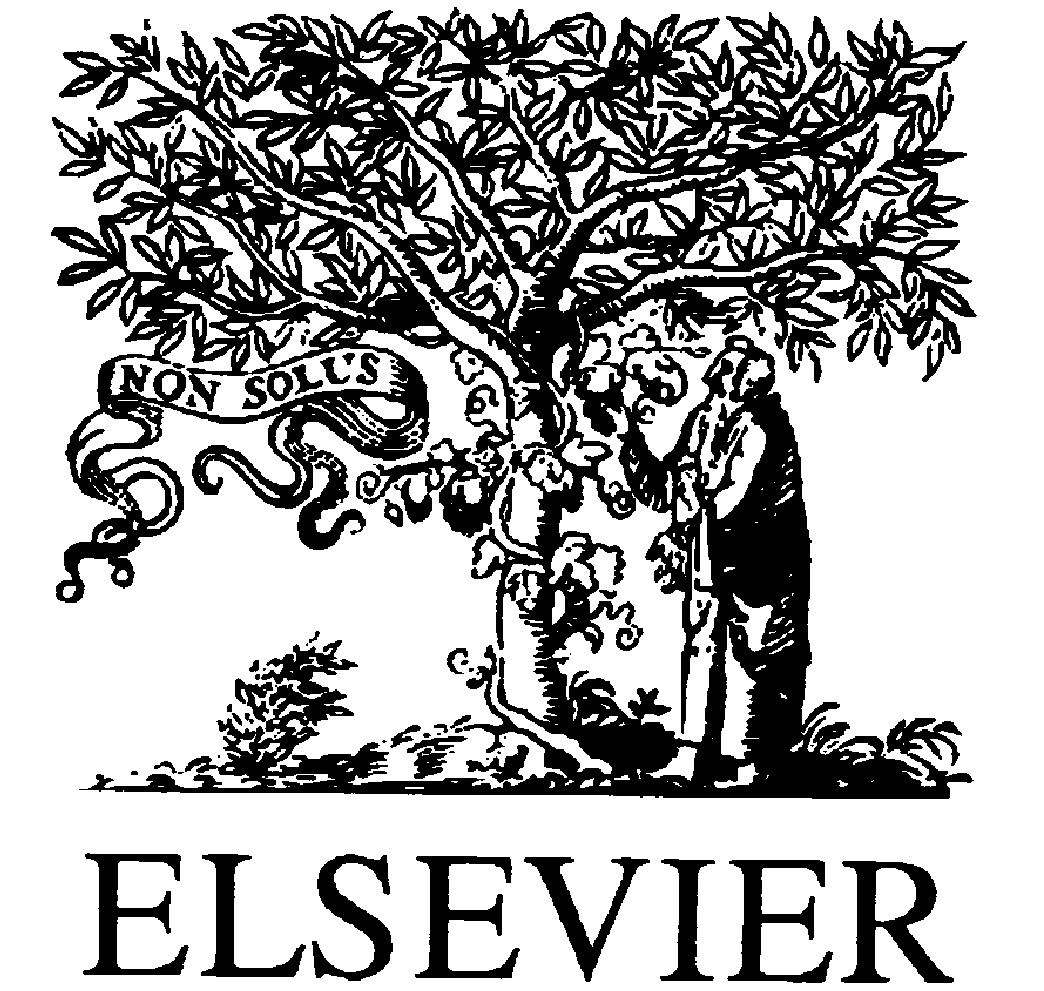 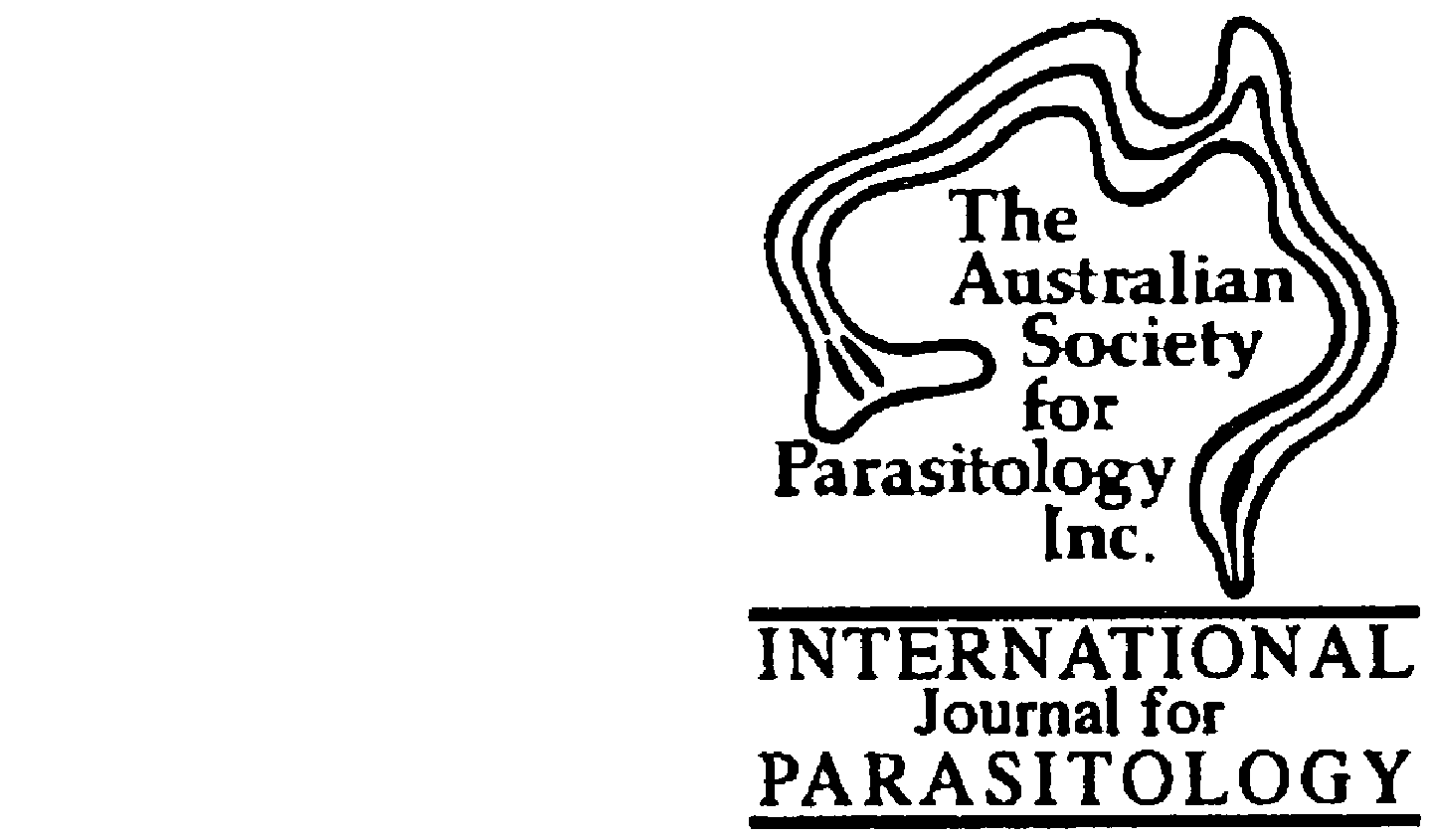 International Journal for Parasitology 29 (1999) 619±625 The eect of chloroquine treatment on the infectivity of Institute of Cell, Animal and Population Biology, Division of Biological Sciences, University of Edinburgh, Edinburgh EH9 3JT, UK Received 19 October 1998; received in revised form 3 December 1998; accepted 3 December 1998 The antimalarial drug chloroquine has been reported to increase the infectivity of the forms of blood-stage malaria parasites (gametocytes) that are capable of infecting mosquito vectors. This eect has been demonstrated convincingly in the short term (12 h post treatment), although several authors have suggested infectivity enhancement a week or more after treatment. We carried out experiments to investigate the eects of chloroquine on the longer-term infectivity of gametocytes of the rodent malaria parasite, Plasmodium chabaudi, to Anopheles stephensi mosquitoes. Gametocytes of chloroquine-treated infections were signi®cantly more infectious than untreated infections 6 and 7 days post-treatment, although not on days 8 and 9. However, this eect was most likely the result of a reduction in infectivity in untreated infections, caused by immune activity which was not so pronounced in chloroquine-treated infections. Gametocytaemia (gametocytes per r.b.c.) showed a strong positive and linear relationship with infectivity. Infectivity was not in¯uenced by either asexual parasitaemia, asexual density or anaemia. Parsimonious interpretations of the eect of chloroquine on gametocyte infectivity are discussed.
# 1999 Australian Society for Parasitology Inc. Published by Elsevier Science Ltd. All rights reserved.
Keywords: Anopheles stephensi; Chloroquine; Gametocyte; Infectivity; Malaria; Plasmodium chabaudi; Transmission the transmission stages of a Plasmodium infec- failed to signi®cantly reduce malaria prevalence, tion, gametocytes [2, 3]. However, two other and resistance to many antimalarial drugs has spread at an alarming rate [1]. This is partly enhance transmission have been suggested. First, because some of the commonly used antimalarial chemotherapy may induce greater gametocyte drugs have little parasite killing activity against production, both through genotypic [4±6] and short-term phenotypic changes [7]. Given the generally positive correlation between gametocyte densities and infectivity to mosquitoes [8, 9], such * Corresponding author. Present address: Department of changes are likely to increase transmission.
Plant Sciences, University of Oxford, South Parks Road, Second, the antimalarial drug chloroquine (CQ) Oxford OX1 3RB, UK. Tel: 01865-275106; Fax: 01865- 275074; e-mail: [email protected] has been reported to increase the infectiousness 0020-7519/99/$20.00 # 1999 Australian Society for Parasitology Inc. Published by Elsevier Science Ltd. All rights reserved.
A.G.J. Buckling, A.F. Read / International Journal for Parasitology 29 (1999) 619±625 of gametocytes, independent of gametocyte cyte infectivity with increasing eciency for 21 days following treatment'', using cultured Data on infectivity enhancement of gameto- gametocytes of P. falciparum and of the rodent cytes by CQ are ambiguous. It is clear that CQ malaria, Plasmodium berghei. They report a sig- per se does not increase gametocyte infectivity: ni®cant increase in infectivity through time fol- the addition of CQ to cultures prior to feeding mosquitoes did not increase either the pro- gametocytes, and a non-signi®cant increase with portions of mosquitoes infected, or the number P. falciparum gametocytes, although the validity of these analyses is questionable. Infectivity of developed [1, 10, 11]. Enhanced gametocyte infec- gametocytes obtained from naturally infected tivity 12-h post sub-curative CQ treatment has CQ-treated volunteers was not signi®cantly been demonstrated in vivo for the rodent malaria greater when mixed with the patients' own (CQ- containing) plasma compared with European Plasmodium yoelii nigeriensis [14]. However, there control plasma [17]. A ®eld study investigating was no reported increase in the infectivity of factors in¯uencing human infectivity to mosqui- Plasmodium falciparum gametocytes when mixed toes also found no P. falciparum infectivity- with sera collected 24 h after CQ had been taken, compared with sera before treatment [15].
It is clearly important to determine whether Similarly, there was no infectivity enhancement CQ enhances gametocyte infectivity for more than a matter of hours. We therefore carried out between 0 and 72 h post-treatment [3].
experiments to investigate gametocyte infectivity of the rodent malaria, Plasmodium chabaudi, in enhance per gametocyte infectivity a week or vivo 6±9 days after CQ treatment, at the time of more after treatment, but here the data are even more ambiguous. Curative CQ-treatment of P.
Details of methodology are given in Buckling falciparum-infected humans resulted in greater et al. [7]. Male C57/BL/6J mice were infected by median parasite burdens in Anopheles balabacen- i.p. inoculation with 106 parasites on day 0.
sis mosquitoes (but not in Anopheles dirus) fed 2 Parasite clones and sample sizes are shown in and 7 days after treatment, compared with that Table 1. On day 5 or 6 p.i. (1±2 days before the before treatment. However, mean oocyst burdens average peak asexual parasite density), half the and the proportions of mosquitoes infected did mice were orally treated with a sub-curative dose not change [16]. Hogh et al. [17] recently reported of chloroquine sulphate (12 mg kgÀ1); the others that ``serum from chloroquine-treated, unin- received distilled water (controls). In each exper- fected, non-immune volunteers enhanced gameto- iment, half the control and half the CQ-treated a One mouse died from severe anaemia on day 8 post-infection. 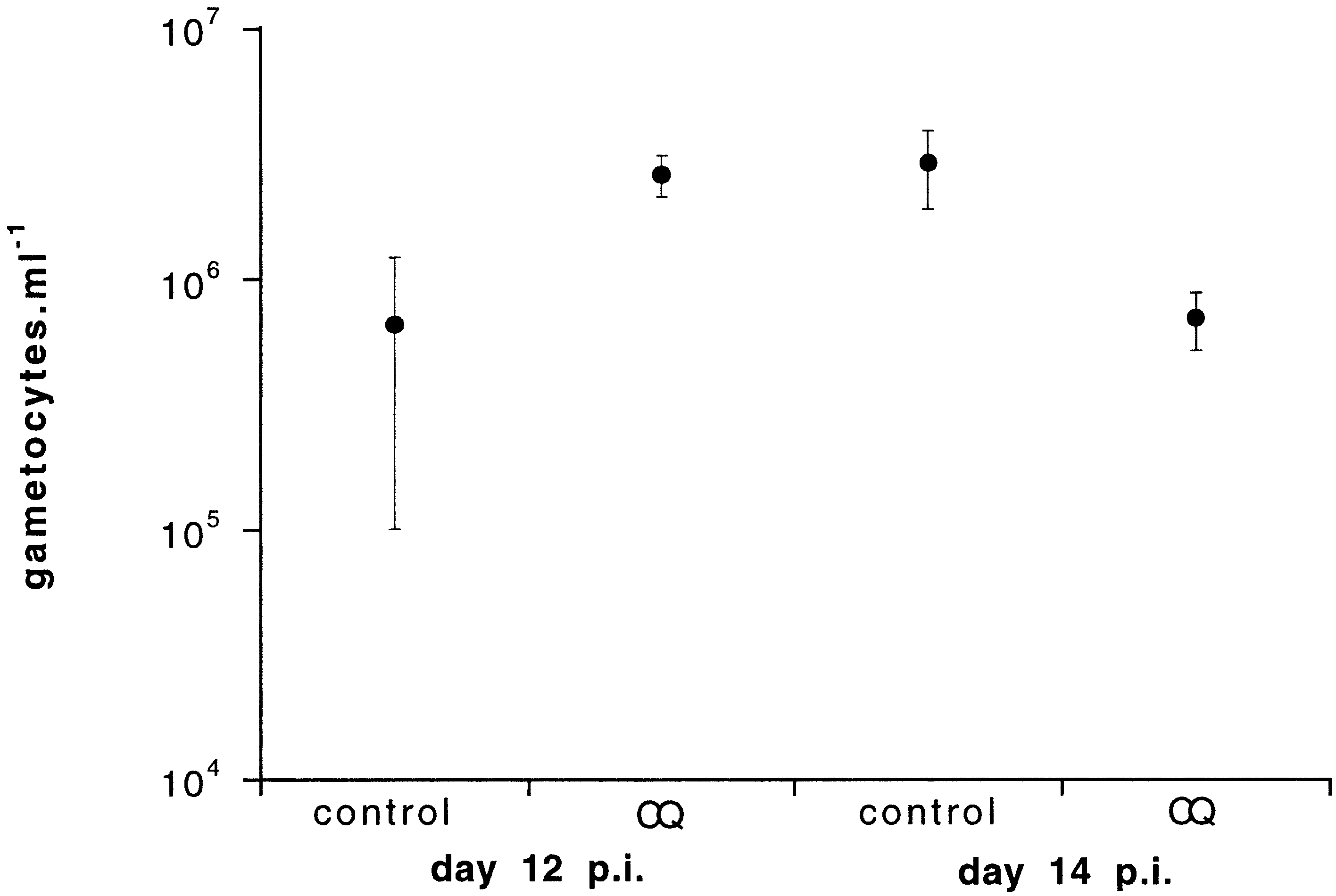 A.G.J. Buckling, A.F. Read / International Journal for Parasitology 29 (1999) 619±625 mice were picked randomly and fed to H40 4±5- day-old Anopheles stephensi on day 12 p.i. (except in the control group in experiment 1, where two animals out of ®ve were fed to mosquitoes). The other mice were fed to mosquitoes on day 14 p.i.
Days 12 and 14 p.i. are the days of peak gameto- cyte densities in CQ-treated and untreated infec- tions, respectively [7]. Asexual parasites and gametocytes per r.b.c. and r.b.c. density were determined for each mouse on both feed days; parasite densities were calculated from the pro- duct of these variables. Approximately 25 mos- quitoes per mouse were dissected 8±9 days after Fig. 1. Mean21 S.E.M. gametocyte densities in chloroquine- feeding and the number of parasites (oocysts) on treated and untreated infections on days 12 and 14 p.i.
All analyses were carried out using GLIM 4.
within each analysis [19, 20]. Data from individ- Proportions of mosquitoes infected per mouse ual mosquitoes were nested within mouse to were analysed by logistic regression with a bino- avoid pseudo-replication. Non-signi®cant inter- mial error structure. Over-dispersion in the data actions were combined with the error term to was corrected by using a heterogeneity factor determine signi®cance of main eects. Dierences (HF) of 3.05, determined from the ratio of Pearson's w 2 to the degrees of freedom in the between days and treatments were determined by minimal model [19]. Day p.i. of feed (12 or 14), ANOVA, using stepwise deletion as above, with treatment (CQ + , CQÀ) and experiment (1, 2 or treatment, day and experiment ®tted as factors.
3) were ®tted as factors, and square-root arcsin- Gametocyte densities were 3.8 times higher on transformed gametocytes per r.b.c. (gametocytae- day 12 p.i. than day 14 p.i. in CQ-treated infec- mia) ®tted as a covariate. The minimal model tions, and 4.4 times higher on day 14 p.i. than was determined by stepwise deletion, starting day 12 p.i. in untreated infections (Fig. 1, day by with the highest order interactions, with non-sig- treatment interaction: F1,29 = 5.03, P < 0.05). In ni®cant terms discarded [19]. The explanatory the full logistic regression model, gametocytaemia power of remaining terms was determined by del- explained 46% of the deviance associated with etion from the minimal model. Additional covari- ates [log10-transformed gametocyte densities, asexual densities and r.b.c. densities, and square- root arcsin-transformed asexuals per r.b.c.
(asexual parasitaemia)] were substituted with gametocytaemia in the minimal model to deter- mine if they explained a signi®cant amount of Further analyses were carried out in the same way within days (HF = 3, 3.6 for days 12 and 14 p.i., respectively) and treatments (HF = 1.8, 4.1 for CQ+ and CQÀ, respectively), using only covariates that were signi®cant in the previous model. Analyses of oocyst burdens were also car- ried out within days and treatments using a nega- Fig. 2. Relationship between proportion of mosquitoes infected and gametocytaemia (gametocytes per 1000 r.b.c.) for tive binomial error structure, with the over- all data. Small numbers in body of ®gure show multiple data dispersion parameter, k, estimated separately

“Intergenerational Occupational Mobility in Britain and the U.S. Since 1850” Abstract The U.S. both tolerates more inequality than Europe and believes its economicmobility is greater than Europe’s. These attitudes and beliefs help account fordifferences in the magnitude of redistribution through taxation and social welfarespending. In fact, the U.S. and Europe had roughly equal rates