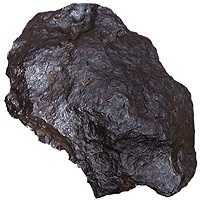 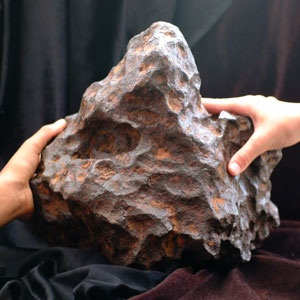 It has been estimated that 100,000
tonnes of extraterrestrial material
Every year the Earth is showered by
reach the Earth’s surface every year. It
extraterrestrial material falling from
can be anything from fine dust to
space. The Museum’s mineralogy and
metallic masses weighing many tonnes.
petrology collections include a small
Extraterrestrial material that falls towards the holding of meteorites, and a display of
Earth is classified by size. The majority of this some of this material is on show in the
material is in the form of tiny particles called rocks and minerals aisle of the main
micrometeorites. They fall continuously, and court, along with a large touchable
specimen that fell in Nantan in China.
Meteors or ‘shooting stars’ are often seen in a clear night sky. They are larger dust particles and small rocky fragments, many no more than a gram in weight, which are burnt up by friction as they fall through the Earth’s atmosphere.
Meteorites are larger pieces of rock that reach the Earth’s surface without getting burnt up in the atmosphere. A meteorite whose arrival has been witnessed is called a fall. Meteorites discovered without a known time of fall are The Nantan meteorite
called finds. All meteorites, falls and finds, are This meteorite comes from either Lihu or Yaozhai town in named after the place where they were picked Nantan County, Guangxi, China, where it fell in 1516. It is an up. They are broadly classified according to iron meteorite weighing over 155 pounds (71kg), and is composed of the minerals kamacite and taenite (each alloys of their composition into stones, stony-irons and the metals iron and nickel). The surface of the meteorite is rusty, and covered in thumb-like depressions called regmaglypts, which have been produced by melting of the meteorite during entry into the Earth’s atmosphere. It is currently on display in the rocks and minerals aisle of the main court as one of a series of touchable specimens.
What is ‘Learning more’?
‘Learning more’ presents a series of articles about the Museum and its collections. It is designed for older students, teachers, researchers, and anyone who wants to find out more about particular aspects of the Museum’s work and its history.
This article introduces the meteorites in the Museum currently on display in the mineralogy and petrology aisle of the court.
‘Learning more’ articles are free, and available to all for educational, non-profit Campo del Cielo meteorite
This large meteorite comes from Campo del Cielo in northern Argentina where it fell three or four thousand years ago, along of all material used in this leaflet.
with many other similar pieces of up to 37 tonnes in weight. This particular specimen weighs 120 pounds (55 kg). Oxford University Museum of Natural History 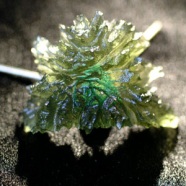 Where do meteorites come from?
Why are meteorites important?
Most meteorites are thought to come from Despite their rarity, meteorites are more than asteroids, small rocky bodies orbiting the Sun. exotic curiosities. They can provide important The largest known asteroid is 930km across, clues about the origin, age and evolution of just over one quarter the diameter of the the solar system and the structure of the Moon. Most asteroids are to be found in the Earth. Meteorites may also hold clues to the ‘asteroid belt’ between Mars and Jupiter. A origins of life on Earth, and they may have small number of meteorites are thought to contributed to ‘mass extinctions’ (for example the extinction of the dinosaurs) identified in Tektites and moldavites
Tektites are fragments of natural green glass formed by Moldavites are a specific type of tektite, found across Europe The inner solar system
Moldavite, Czech Republic
A diagram showing the inner solar system and the position of Is it a meteorite?
the asteroid belt between Mars and Jupiter.
People often come into the Museum claiming they have found a meteorite; to What happens when meteorites fall?
atmosphere it slows down from supersonic speeds. Reports of falls describe meteorites as ‘glowing fireballs’ in the sky, and are Meteorites are usually quite distinctive rocks. Because they can contain high levels these effects are caused by the friction an object experiences travelling through the terrestrial rocks and tend to feel heavier. Earth’s atmosphere. Often, a single rock Their characteristic black fusion crust is will break up as it falls, forming a meteorite caused by surface melting during their fall On impact, a meteorite will usually form a crater as the surrounding rock and soil is thrown out of the way by the impact. Small glassy objects called tektites form when Extra-terrestrials in the Museum
molten and vapourised rock is blasted into Samples of meteorites from the Museum’s the atmosphere during the formation of an collection are on display in the rocks and Shatter cones
and irons, and show the fusion crusts of the meteorites. Some of the iron meteorites the pattern where crystals of two minerals spread out, creating a cone structure that points towards the Oxford University Museum of Natural History 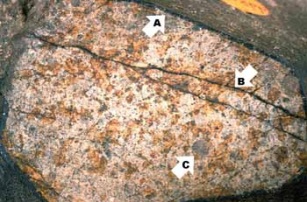 The Launton meteorite
The Launton meteorite fell
Description of the Launton Fall
on 15 February 1830 at
An account of the landing of the meteorite 7.30pm and an account
is reproduced below, from the Magazine of of 1831 describes how a
Natural History, 1831. This account is by a bright fireball was seen
and loud bangs were
heard, typical pheno-
of the meteorite for analysis. At the time, mena accompanying
the arrival of a meteorite.
The Launton is a stony meteorite of the
most common type, known as an
notes on the fall differ in one respect from ‘ordinary chondrite’.
Mr Stowe’s description in that the sound was compared to ‘the rapid discharge of a On 15th February 1830 a meteorite landed at triple-barrelled gun’. In other words there Launton, ten miles from Oxford. It belongs to the chondrite group of stony meteorites and ‘An event occurred in this neighbourhood a short time ago which excited a good deal of produced as the surface melted on entering curiosity and enquiry, and which, as far as I the Earth’s atmosphere. The one and only can learn, is unprecedented in the history of the county in which it happened, and, on that account, worthy of being put on record in a Museum in London, but a nineteenth century more permanent publication than the replica is kept by the Museum in Oxford.
ephemeral columns of a newspaper. The circumstance to which I allude is the fall of a meteoric fall on Monday, the 15th day of February, 1830, at half-past seven in the evening, in the garden of John Bucknell, a labourer in the employment of Mr. Cross, farmer, at Launton, near Bicester, Oxon. Its descent was accompanied with a most brilliant light, which was visible for many miles around, and attended with a triple explosion, which was described to me, by a person who heard it at the distance of four miles, as resembling the rapid discharge of Features of the meteorite
three ordinary guns. It penetrated some Photograph of the central part of the only specimen of the newly dug mould nearly a foot deep; and, Launton meteorite (held at the Natural History Museum in though seen to strike the earth, was not London), showing: (a) fusion crust, (b) iron-nickel vein, and (c) sought for till the following morning, when, of chondrule; (width approximately 4 cm).
course, it had become cool.
A man named Thomas Marriot was passing Structure and composition
near the garden at the moment, and states that it came rapidly towards him from the The meteorite was lost after its original north-east, not perpendicularly but obliquely, owner’s death, and subsequently traced appearing about the size of a cricket-ball; and that expecting it would strike him, he instinctively lowered his head to avoid it.’ by G T Prior in 1916. The mineral composition corresponds to an olivine- This page was originally written by a student from Oxford bronzite rock with additional iron-nickel, Community School during a week’s placement at the Museum funded by the British Gas Lattice Foundation.
Oxford University Museum of Natural History