To: All General Practitioners,

Dear Colleagues
There has been an increase in number of confirmed cases of whooping cough in children and adults
in Mid & West Wales Region in the past 2 months. The purpose of this letter is to remind you of the
signs and symptoms of the disease and of the importance of notifying all clinically suspected cases
to the Health Protection Team.
Whooping cough is a highly infectious disease with symptoms which include a catarrhal stage,
followed by an irritating cough that gradually becomes paroxysmal, usually within one to two weeks.
The paroxysms are often accompanied by a characteristic “whoop” and may sometimes be
accompanied by vomiting. In young infants the “whoop” may be absent and coughing spasms may
be followed by periods of apnoea. The illness often lasts for two to three months. In older children
and adults, the diseases may be mild and not recognized as whooping cough. Complications include
bronchopneumonia, repeated vomiting, subconjunctival haemorrhage and cerebral hypoxia. Severe
complications and death occur most commonly in infants under six months of age.
Most cases are infectious during the early catarrhal stage and the incubation period is between six
and twenty days with cases being infectious from six days after exposure to three weeks after the
onset of typical paroxysms. Antibiotic treatment (erythromycin, clarithromycin or azithromycin) for
suspected or confirmed cases should be given within three weeks of the onset of illness. Cases
should be excluded from nursery, school or work for five days from the onset of antibiotic therapy.
Vaccination is the only way to prevent whooping cough and children should be vaccinated as part of
the routine childhood immunization schedule. Erythromycin, azithromycin or clarithromycin
prophylaxis may be of value for household contacts of suspected or confirmed cases where there are
vulnerable contacts (*see below), if given within 21days of onset of the index case.
Suspected symptomatic cases may be tested by per nasal swab (please see attached instruction
sheet) or serology.
I would ask you to remain vigilant for any signs and symptoms of whooping cough and to contact
the Health Protection Team if you suspect any cases. Our contact number during office hours is
01792 607387 and out of hours via Ambulance Control on 01267 222555.
Thank you for your support in this matter
Dr Mac Walapu
Dr Jorg Hoffmann
Consultants in Communicable Disease Control, Health Protection Team, Mid & West Wales
Region
Cc
Communications Directors of Public Health; ABMU, Hywel Dda, Powys LMC 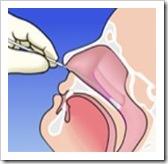 These include individuals who are themselves at increased risk of complications
from pertussis as well as those at risk of transmitting the infection to others at risk
Newborn infants born to symptomatic mothers Infants under one year who have received less than three doses of Unimmunised and partially immunized infants and children up to ten years Women in the last month of pregnancy Adults who work in healthcare, social care or childcare facility Immunocompromised individuals (as defined in The Green Book) Presence of other chronic illnesses e.g. asthma, congenital heart disease
Nasopharyngeal Swab Method - Respiratory
viruses, B. Pertussis
1) Using pernasal swab with synthetic fibre tip: b) Press swab tip on the mucosal surface of the mid-inferior portion of the inferior turbinate (see sketch), and rub the swab tip several times across the mucosal surface to collect cellular material. c) Place swab into VIRUS TRANSPORT MEDIUM for viruses or place back in collection tube for Bordatella pertussis PCR. d) Label with patient name, date of birth, and date of collection. If per-nasal or floc swabs are not available for microbiological testing in primary care, serological testing can be used in older children and adults in the absence of recent vaccination

related to deadly canine flu for “kennel cough,” a common canine illness that is caused by the bordetella bronchiseptica bacteria. Both diseases can cause coughing and gagging for up A new, highly contagious and sometimes deadly canine to three weeks, but dogs with canine flu may spike flu is spreading in kennels and at dog tracks around the fevers as high as 106 degrees and have runn