Örjan Hallberg [email protected] Hallberg Independent Research http://hir.nu Things are not really improving. Now the beesseem to give up their struggle with the phone companies and just die off. This was first noticed in A paper on house sparrows and how they appear to the USA but similar trends are seen also in Europe avoid areas with high electromagnetic fields has been accepted for publication by ElectromagneticBiology and Medicine. It will appear in issue 2 later They have tiny mobile phones imbedded in their bodies and seem able to communicate with theirfellows and mates. An important part in that In a Letter to the Bulletin of WHO I have given communication is a set of pheromones that not just some comments to a very good paper on melanoma, smell nicely, but also radiate at high frequencies written by Robin Lucas et al. This letter has been accepted for publication in the next issue of theWHO bulletin.
If a female bee is covered by a plastic shield themale bee can still locate the attractive lady although References
no pheromone molecules can escape through the 1. Balmori A, Hallberg Ö. The urban decline of plastic. But when she is covered by a metal/plastic film like a Faraday's cage the male bee has no sense possible link with electromagnetic radiation.
2. Hallberg Ö. Letter in reply to manuscript by How long shall we wait until our authorities will Robin Lucas et al. Bulletin of the World Health realize that we are all prisoners in the same global network of radiation? If the bees give it up, lots offruit and flowers will disappear.
And what about the birds? They also seem getting It is known that EMFs can affect communication tired of our communication technology and are and sexual pheromones used by bees, mots and avoiding areas with strong radiation.
butterflies. In the human world signs indicate thatEMFs may affect testosterone and estrogens. Such Nature invented the use of weak radiation at high pieces of information should also be taken into GHz frequencies for location and communication consideration when conclusions are drawn from the purposes hundreds of million years ago. Now we fast increasing rates of prostate cancer we see today are drowning all that in a tremendously much in Sweden and in many other countries.
stronger flood of microwave radiation. The beescan not hear their own conversation any more and Anybody can today download cancer data from the feathers of the birds start itching close to the official data bases available free of charge via the Internet. The Swedish database gives the age-specific incidence of prostate cancer as shown inFigure 1. There are two important trend breaks to 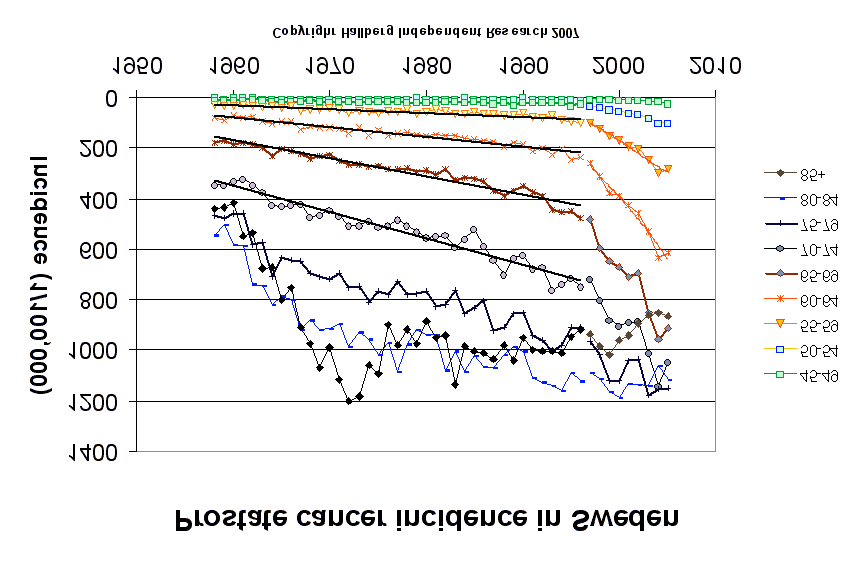 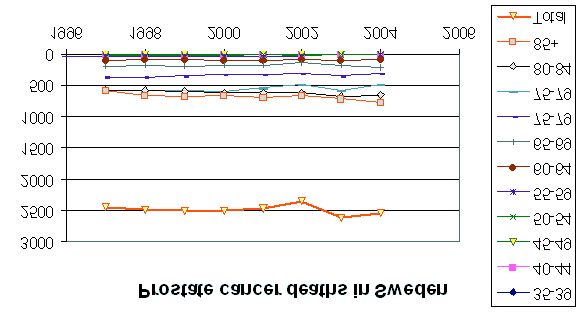 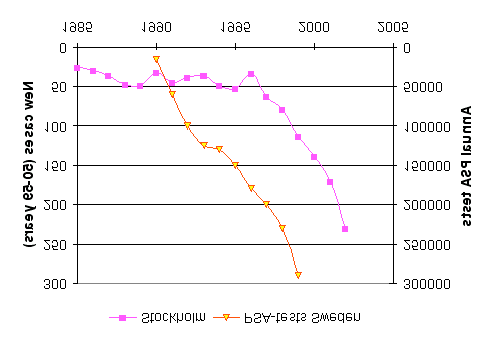 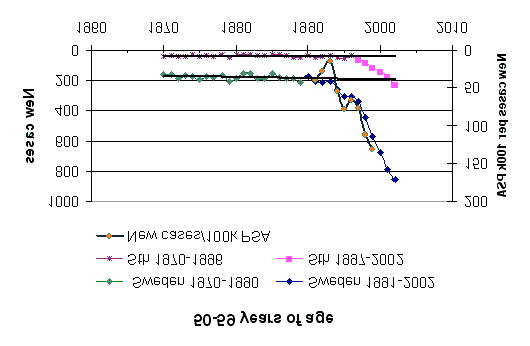 First, right after 1955 the incidence for older men for than the one favored by our authorities and starts to increase at an extraordinary fast rate. This was the time when Sweden got covered by FM andTV towers. No PSA testing was done at that time.
Secondly, the incidence for all age groups start toincrease again abruptly right after 1997.
Figure 3. The number of performed PSA tests per
year started to increase from 1990 in Sweden and
not in 1997 when the number of detected prostate
cancer cases suddenly started to increase.
Figure 1. Age-specific incidence of prostate cancer
in Sweden reported since 1958 to 2005.
The Swedish National Board of Health and Welfare(SOS) states that the latest trend break in 1997 iscaused by increasing use of PSA-testing. "Theincrease can mainly be explained by a special bloodtest, a so called PSA-test (prostate specific antigen)that is often taken as a step in investigatingsymptoms from the urine paths. PSA-tests are alsooften performed in connection with routine healthcheck-ups. An increased PSA-level gives a signalthat further investigations are needed, whichprobably causes that many cases today are detected Figure 4. The number of new cases of prostate
earlier than before. An increased awareness about cancer per year in Sweden and in Stockholm. Also this disease may also have caused men to more shown is the number of detected prostate cancers frequently take health tests than before." Well, if that was true we should expect decreasingmortality since 1997, but this is not the case, as can The statement by our responsible authority (SOS),that increasing cancer rates are artifacts due to over-consumption of PSA tests, is not supported byscientific facts and is nothing but a private opinion.
This problem should be attacked by standardproblem solving methods and not buried by issuinga statement like the one mentioned above.
It is now time to start professional analyses ofavailable data to find out the physics behind the Figure 2. A stable or even increasing mortality is
figures. This seems, unfortunately, to be totally seen despite increasing use of PSA tests.
unknown by professional epidemiologists. It may
be necessary to invite papers to the first
The use of PSA testing started already in 1991 and Epidemiological Physics Symposium in order to set
not in 1997. See Figure 3. If the increasing incidence is only reflecting the increasing use ofPSA tests the number of detected cases per 100k of Areas of interest would be Melanoma, Lung cancer, PSA tests should be kept constant over time. As Breast cancer and Prostate cancer. Suggestions for shown by Figure 4, the number of new cases per location and sponsors for such a Symposium are 100k of PSA tests is steeply increasing from 1997, welcomed. Contact: [email protected] meaning that there is a better explanation to search Next issue: September 2007.