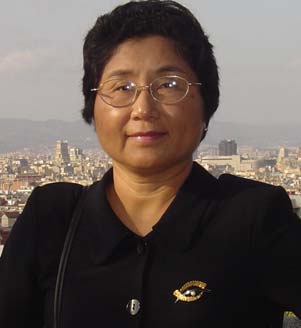 Vitamin D Receptor and Cardiovascular Health
J. Ruth Wu-Wong, Abbott, Abbott Park, IL Vitamin D3 is made from 7-dehydrocholesterol in the skin after exposure to ultraviolet light, modified by vitamin D3-25-hydroxylase in the liver, and then by 25-hydroxyvitamin D3-1α-hydroxylase (CYP27B1) in the kidney to form the active hormone, 1,25-dihydroxyvitamin D3 (calcitriol). Calcitriol exerts its functions via binding to a nuclear receptor, the vitamin D receptor (VDR). The binding of calcitriol to VDR activates the receptor to recruit cofactors to form a complex that binds to vitamin D response elements in the promoter region of target genes to regulate gene transcription. During the past three decades, researchers in the field have focused mainly on the role of VDR in the regulation of parathyroid hormone, intestinal calcium/phosphate absorption and bone metabolism. As a result, several VDR activators (VDRAs) have been developed for the treatment of osteoporosis and hyperparathyroidism secondary to chronic kidney disease (CKD). However, VDR has been identified in more than 30 different tissues in the human body. Emerging evidence shows that VDR may play important roles in modulating cardiovascular, immunological, metabolic and other functions. For example, numerous clinical observations show that vitamin D deficiency is associated with increased risk for cardiovascular disease. In chronic kidney disease (CKD) patients where a deficiency in VDR activation persists over the course of the disease, low levels of 25-hydroxyvitamin D3 and 1,25-hydroxyvitamin D3 are linked to endothelial dysfunction. Furthermore, VDRA therapy was found to provide a survival benefit in both pre-dialysis and hemodialysis CKD patients, likely due to a decrease in cardiovascular-related mortality. All these observations suggest that VDR plays an important role in regulating cardiovascuar function and adequate VDR activation is crutial for maintaining cardiovascular health. J. Ruth Wu-Wong, Ph.D., M.B.A., has had extensive experience in pharmaceutical drug discovery and development. Dr. Wu-Wong worked for Abbott for 20+ years. She played a key role in the development of endothelin receptor antagonists at Abbott, one of which is currently in Phase III clinical studies for prostate cancer. In addition, she was the lead scientist in several other projects at Abbott including the anti-mitotic agent project for cancer, the diabetes project, and the myostatin project. Dr. Wu-Wong was also responsible for product support and new product development at Abbott’s hematology business unit in 1999-2003. During 2003-2007, she headed the vitamin D receptor modulator project at Abbott. At present she works in Commercial Development at Abbott. She is the author and co-author of 100+ papers and 100+ abstracts/presentations. Dr. Wu-Wong obtained her Ph.D. in biochemistry from Ohio State University and her M.B.A. in finance and management from University of Illinois, Chicago. She completed her postdoctoral research at University of Texas in Houston.