Effects of local administration of insulin-like growth factor-I on mandibular condy-
lar growth in rats
Kouichi Itoh, Shoichi Suzuki and Takayuki Kuroda
Maxillofacial Orthognathics, Maxillofacial Reconstruction Division of Maxillofacial/Neck ReconstructionGraduate School, Tokyo Medical and Dental University Endochondral bone formation observed at the
Introduction
mandibular condyle is regulated by various
growth factors including insulin-like growth factor-
Insulin-like growth factor-I (IGF-I) is produced and I (IGF-I). In this paper, we describe a method for the
secreted in the liver and other local tissues upon stim- local administration of IGF-I to the bilateral
ulation by growth hormone, and promotes the growth of mandibular articular cavities of 3- and 12-week-old
various tissues such as bone and cartilage.1,2 rats, and the effects of IGF-I on endochondral
According to previous studies, IGF-I contributes to the bone formation by histomorphometric techniques.
growth of longitudinal bones by stimulating endochon- In 3-week-old IGF-I-treated rats, three days after
dral bone formation in the growth plate.3,4 administration, an increase in bone tissue was
Recently, several roles of IGF-I in the growth of found in the area of the subchondral cancellous
mandibular condyle have been examined. Maor et al.5-7 bone layer.
reported that IGF-I facilitated the proliferation of carti- In 12-week-old IGF-I-treated rats, three days
laginous cells in mouse condyle in vitro by adding IGF- after administration, an increase in the thickness of
I to the culture medium. Furthermore, Visnapuu et al.8 the condylar cartilage and a decrease in bone tis-
revealed the distribution of IGF-I receptors in the sue were observed in the area of the subchondral
mandibular condyle of rats by immunohistological and cancellous bone layer.
in situ hybridization experiments. These results indi- This study revealed that the local administration
cated that IGF-I probably also played important roles in of IGF-I on mandibular condyle caused different
histological changes between growth and matura-
Several previous reports have shown that local or tion periods. These results indicated that the
systemic extrinsic administration of IGF-I caused his- effects of IGF-I on endochondral bone formation in
tological changes in the growth plate, and enhanced the mandibular condyle were age-dependent.
long axial growth of longitudinal bone.9-14 However, toour knowledge, there have been no similar studies on Key words:
mandibular condylar cartilage in vivo.
The purpose of this study was to establish a method for local administration into the mandibular condyle of rats, and to investigate the histological Maxillofacial Orthognathics, Maxillofacial Reconstruction, Division of changes in the condyle after the local administration of Maxillofacial/Neck Reconstruction, Graduate School, Tokyo Medical and Dental University.
5-45, Yushima 1-chome, Bunkyo-ku, Tokyo 113-8549, Japan.
Tel 03-5803-5538 Fax 03-5803-0203E-mail [email protected] October 18, 2002; Accepted January 14, 2003 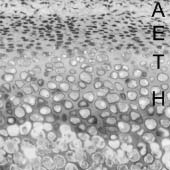 Materials and methods
Nussloch, Germany). Decalcified ground sectionswere then prepared and used for histological observa- Hormones and chemicals
tion. We followed the example of Noguchi15 in defining Bacteria-derived human recombinant insulin-like growth factor I (rhIGF-I, R & D Systems, Minneapolis, The condyles on the right side were dehydrated MN) was dissolved in physiological saline to a concen- through a series of increasing concentrations of tration of 20 Òg/ml. It was the lowest dose which could ethanol (to 100%), filtered, and embedded in acrylic observe histological changes in our earlier study.
resin (LR white resin, The London Resin Co. Ltd., UK).
Tetracycline and calcein were purchased from Wako Before being embedded in acrylic resin, three reference points (A, the anterior edge between the cartilage andbone; B, the posterior edge between the cartilage and bone; and C, the midpoint of A and B on the uppermost Thirty 3-week-old and 20 12-week-old male articular surface in the sagittal dimension) were Sprague-Dawley rats (Sankyo Lab Service Co., Inc., marked directly points could be defined under the Tokyo, Japan) were used in this study. They were divid- microscope, the coordinate axis (X-axis, line AB; Y-axis, ed into control and treatment groups and weighed once perpendicular line through the midpoint of AB) in each section could be easily aligned (Fig. 2a, b). Thecondyles on the left side were decalcified with 2% Procedure for administration
formic acid for one week and embedded in glycol- The animals were anesthetized intraperitoneally methacrylate resin (Historesin, Leica Microsystems, with sodium pentobarbital. After the articular capsule of Nussloch, Germany) on each condyle using white the temporomandibular joints was exposed, the tip of a paint. The tissue block was trimmed with a microtome needle (27-gauge 0.75-inch, Terumo, Tokyo, Japan) on so that the three reference points could be lined up on a tuberculin syringe was inserted into the articular cap- the same plane. The oriented plane of the tissue sule, and the drug solution was injected slowly. The block was bonded to the plastic slide glass and animals in the treatment group were administered ground manually. The thickness of the ground section 0.02ml saline solution of IGF-I. The animals in the con- trol group were administered an equivalent volume of Undecalcified ground sections were used for fluo- physiological saline. Ten 3-week-old male Sprague- rescent microscopy. The growth rate of endochondral Dawley rats were used for a fluorescent-labeling bone formation could be calculated by measuring the study. Two hours before the administration of IGF-I or distance between the calcein and tetracycline labels saline, each rat was given 8 mg/kg tetracycline intraperitoneally for the fluorescent labeling of bone.
They were killed on the third day after administration.
Five hours before killing, a second fluorescent label,calcein (3 mg/kg), was given intraperitoneally. On thethird, fifth and seventh days after administration, 3-week-old rats were killed with an overdose of sodiumpentobarbital, while 12-week-old rats were killed in thesame way on the third and fifth days. All proceduresused in this experiments were approved by an institu-tional committee on animal experimentation.
Preparation of sections and histomorphometric
measurements
After killing, the mandibular condyles were dissected out and immersed in Karnovsky’s fixative solution (pH7.2) for three days. Fig. 1. Cellular organization of the mandibular
The condyles on the left side were decalcified with condyle of rat. A, articular zone; E, embryonic 2% formic acid for one week and embedded in glycol- zone; T, transitional zone; and H, hypertrophic methacrylate resin (Historesin, Leica Microsystems, 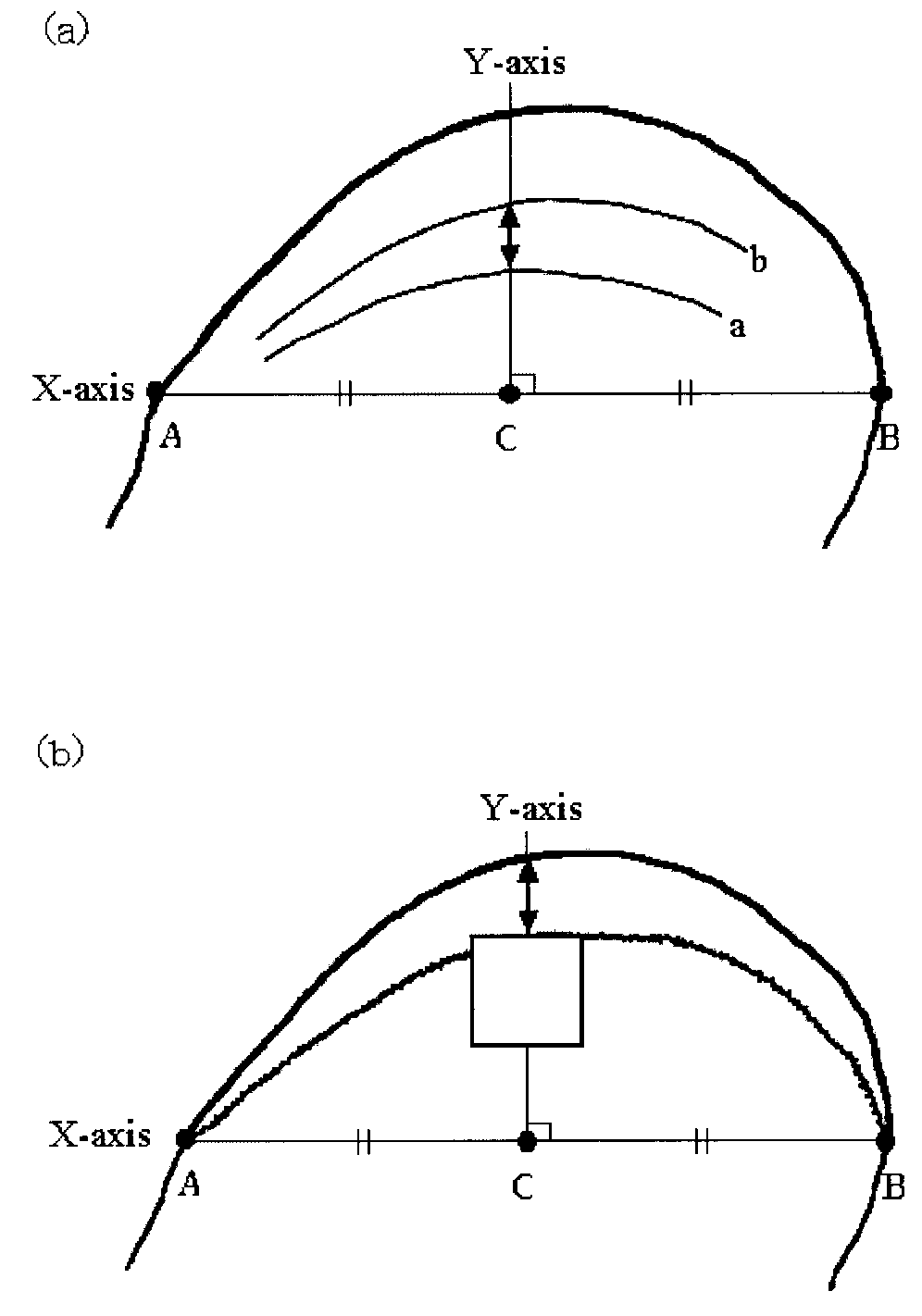 LOCAL ADMINISTRATION OF IGF-I ON MANDIBULAR CONDYLE square was positioned so that its vertical edge was par-allel to the Y-axis of the section, and its upper horizon-tal edge was placed on the upper edge of the cartilagelacuna which initially opened to the bone marrow (Fig.
2b).
To statistically examine differences in the increase in body weight, the growth rate of endochondral bone for-mation, the thickness of the cartilaginous layer and thepercentage of bone area in the subchondral cancellousbone layer between the IGF-I and control groups,Student’s t-test was performed using Stat View(Abacus Concepts, Inc., Berkeley, CA, USA).
Body weight
No significant difference in the increase in body weight was found between the control and IGF-Igroups at 3 or 12 weeks of age.
Histological observation
In the IGF-I group at 3 weeks of age, three days after administration, more osteogenesis was observedaround the calcified cartilage spicules in the subchon-dral cancellous bone area than in the control group(Fig. 3a, b). However, seven days after administration, Fig. 2. a) Schematic drawing of section from mandibular condyle.
no significant difference was seen in the subchondral Point A, the anterior edge between the cartilage and bone; Point B, the posterior edge between the cartilage and bone; and Point C, the In the IGF-I group at 12 weeks of age, three days midpoint of A and B on the uppermost articular surface in the sagit- after administration, a significant increase in the thick- tal dimension; X-axis, line AB; Y-axis, perpendicular line through themidpoint of AB; line a, fluorescent label of tetracycline; line b, fluo- ness of the cartilaginous layer, especially the thickness rescent label of calcein. Vertical arrow indicated the measurement of of the hypertrophic chondrocyte layer, was seen and Interlabel width of the double fluorescent labels. b) Schematic draw- the area of the subchondral cancellous bone layer in ing of section from mandibular condyle. Vertical arrow indicated the each bone spicule was reduced (Fig. 3c, d).
thickness of the cartilaginous layer of the condyle. Measurement ofbone area was made in the black square.
Thickness of the cartilaginous layer of the
condyle
After the growth rate was calculated, undecalcified There was no significant difference between the con- sections were stained with a 1.0% aqueous solution of trol and IGF-I groups at 3 weeks of age (Fig. 4a). In the Azure A (pH 5.4) and counterstained with a 0.7% aque- IGF-I group, at 12 weeks of age, the thickness of the ous solution of Toluidine blue O (pH 6.8). cartilaginous layer was increased to 125% of the con- The thickness of the cartilaginous layer was mea- trol group at three days after administration.
sured along the Y-axis using a micrometer (Fig. 2b). To However, it then decreased to the control level by five evaluate the activity of bone formation in the subchon- days after administration (Fig. 4b).
dral cancellous bone layer, the ratio of bone area to thetotal tissue (percentage of the bone area) within a Growth rate of endochondral bone in 3-week-old
The average growth rate of endochondral bone in the Scope, Mitani Corporation, Tokyo, Japan). The IGF-I group was 0.28 mm/day, while that in the control 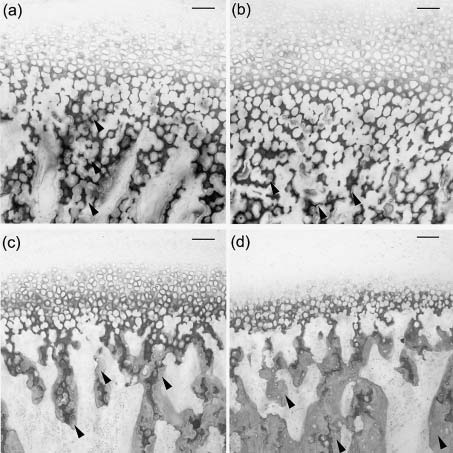 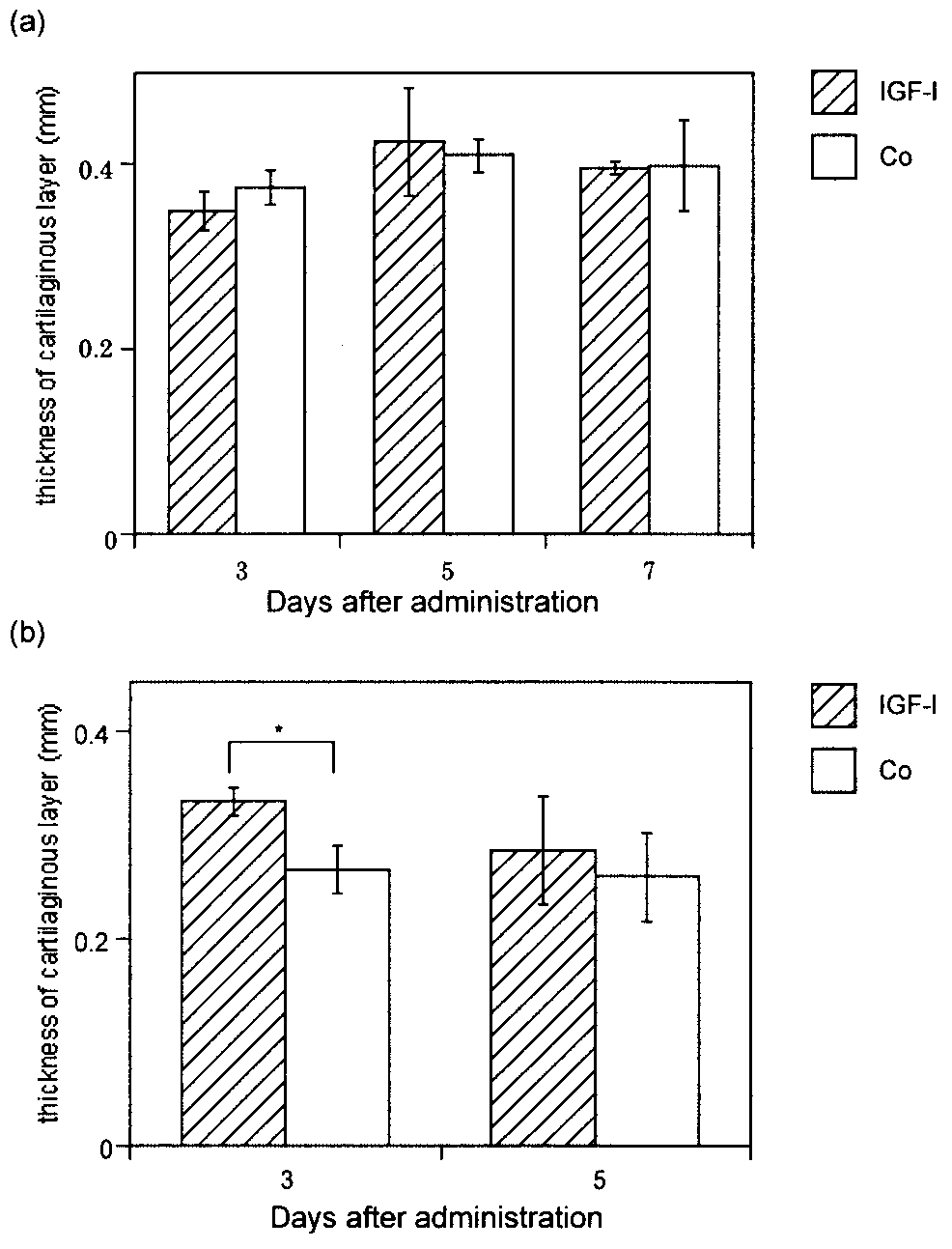 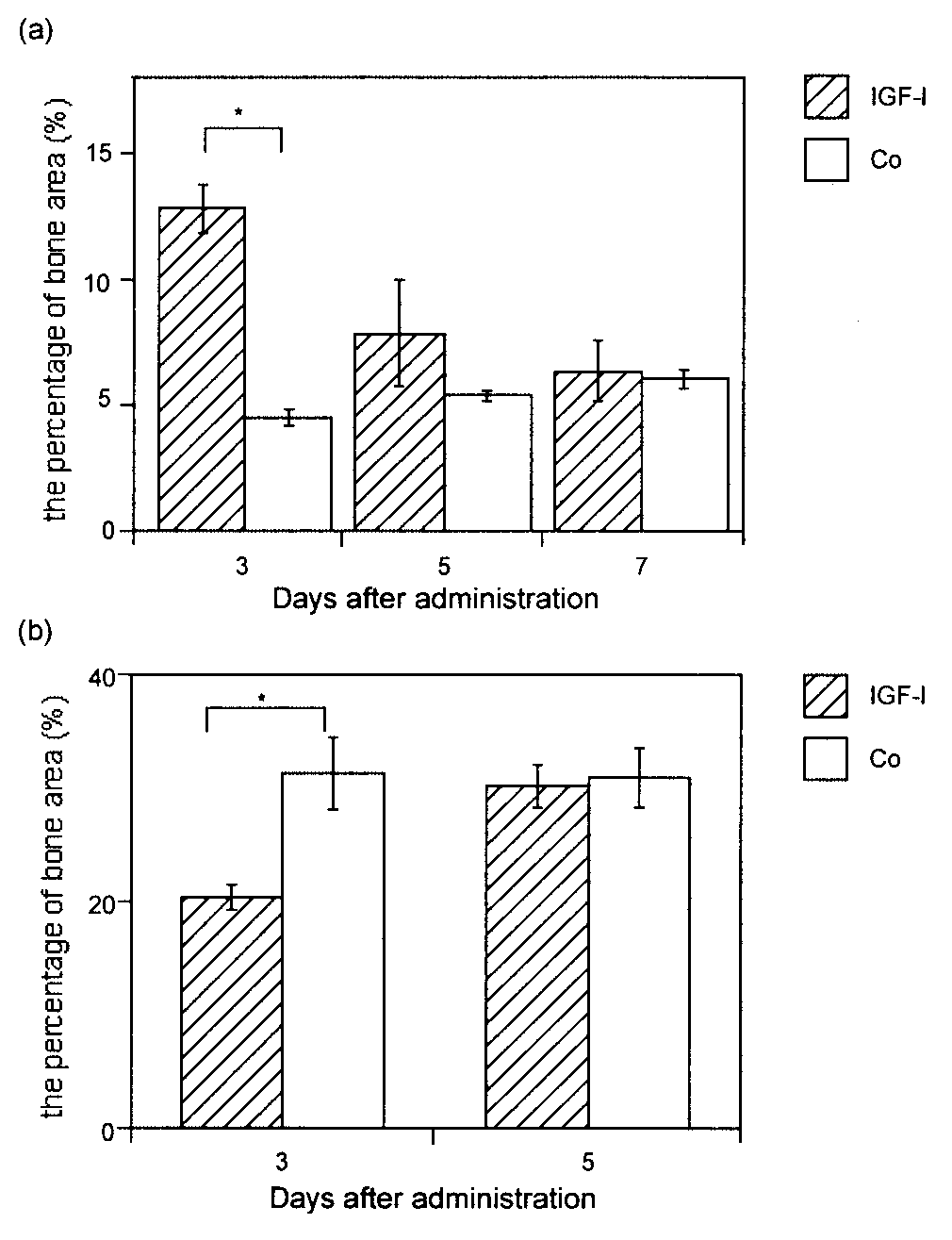 Justice Md. Imman Ali Do children have rights? The answer is too obvious. As citizens of the country they have all the rights as any other adult citizen, subject to embargos imposed by specific laws requiring attainment of majority. Article 27 of the Constitution provides, ‘All citizens are equal before law and are entitled to equal protection of law.’ Article 31 provides, ‘To