Perspectives
Male-Killing Bacteria in Insects:
Mechanisms, Incidence, and Implications
Gregory D.D. Hurst and Francis M. Jiggins
University College London, United Kingdom Bacteria that are vertically transmitted through female hosts and kill male hosts thatinherit them were first recorded in insects during the 1950s. Recent studies have shownthese “male-killers” to be diverse and have led to a reappraisal of the biology of manygroups of bacteria. Rickettsia, for instance, have been regarded as human pathogenstransmitted by arthropods. The finding of a male-killing Rickettsia obligately associatedwith an insect suggests that the genus’ members may be primarily associated witharthropods and are only sometimes pathogens of vertebrates. We examined both howkilling of male hosts affects the dynamics of inherited bacteria and how male-killingbacteria affect their host populations. Finally, we assessed the potential use of thesemicroorganisms in the control of insect populations.
investment in daughters at the expense of sons.
bacteria they pass on to their progeny. These In these cases, particular host lines produce inherited bacteria are often beneficial symbionts female-biased sex ratios, a trait that is inherited that play a key role in host metabolism. In many but curable with antibiotics. We considered one cases (e.g., the aphid symbiont Buchnera), the class of these, the male-killing bacteria, in which bacteria are maintained in a special host organ, infection of a female results in the production of the bacteriome, with the host controlling female-biased broods because male progeny die transmission to progeny, and show evidence of cospeciation (1,2). In these cases, destroying thebacteria (e.g., through antibiotic treatment) Systematics of Male-Killing Bacteria
causes a profound loss of host performance. In Molecular systematic approaches have shown other cases, inherited bacteria are not integrated that male-killing bacteria derive from many into host physiology and anatomy and do not different clades. In most cases, the data come show long-lived relationships with their host, as from DNA sequencing of bacteria associated with indicated by a lack of cospeciation (3). These the trait and confirmation of the trait association bacteria may be broadly separated into two by polymerase chain reaction across infected and classes. First, bacteria maintained through a uninfected lines. Because inherited microorgan- phase of horizontal transmission (e.g., Rickettsia isms are difficult to culture, Koch’s postulates prowazekii), with transmission to other arthro- have been fulfilled formally in only two cases pod hosts often occurring through a vertebrate or (4,5). Given this caveat, male-killing bacteria plant intermediate host (infection of the have been found within the genus Spiroplasma (Mollicutes) (4,6), the Flavobacteria-Bacteroides infection follow from host feeding); second, group (7), and the gamma and alpha subdivisions bacteria that rarely show horizontal transmis- of the proteobacteria (5,8,9) (Figure).
sion, but are maintained because they manipu- Male-killing bacteria derive from arthropod- late host reproduction. One set of manipulations associated bacterial clades that are not them- manifested by these bacteria is increasing selves male-killers. The clades can be separatedinto two types according to the transmissionmechanisms of bacteria within them: first, Address for correspondence: Department of Biology, UniversityCollege London, 4 Stephenson Way, London NW1 2HE, U.K.; entirely horizontal transmission or a mix of Fax: +44 20 73832048; e-mail: [email protected]
horizontal and vertical transmission; and second, 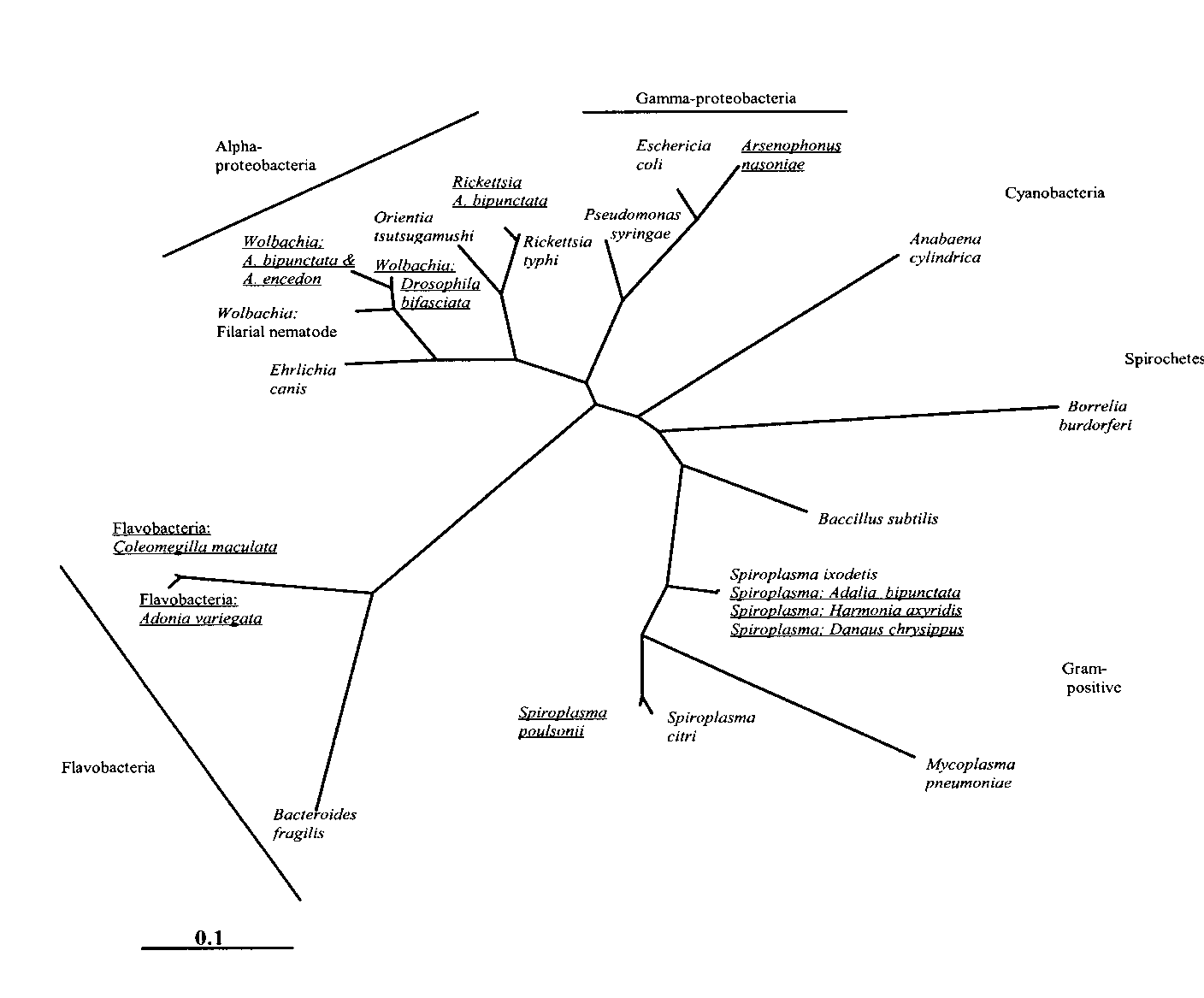 The Medical Letter publications are protected by US and international copyright laws. Forwarding, copying or any other distribution of this material is strictly prohibited. For further information call: 800-211-2769 Published by The Medical Letter, Inc. • 1000 Main Street, New Rochelle, NY 10801 • A Nonprofit Publication Volume 48 (Issue 1249/1250) www.medicalletter.org Decemb