July 26, 2012
What’s happening with soybean yields?
Drought conditions have many growers talking about potential yields this fall. Estimates of yield change almost daily as the excessively hot, dry conditions continue. Most growers can assess their corn crop pretty easily, but assessing soybeans is definitely more difficult. Often an assessment based on weather is a more accurate predictor than field evaluations. It is generally accepted that corn needs more water in July and soybeans need it in August. Does this mean we can still have a good soybean crop if we the drought breaks and we get reasonable rainfall from now until the end of August? The usual formula for predicting soybean yield is: Population X number of pods X number of beans / pod X bean weight
If you assume 2.5 beans/pod and a weight of 2500 beans/lb the following formula will give you a potential yield per acre: Population X Number of Pods X 2.5 / 2500 / 60
Last year, this formula over-estimated the yield in Iowa, with actual recorded yield during harvest being only about 70% of the yield estimated using the formula above. The reason for this was seed weight was lighter than expected (took more beans to make a pound) and the bean count per pod was lower than expected. In 2011, most of the state started the growing season with reasonable early moisture, but ended with a dry summer. As part of a soy yield project conducted by the Iowa Soybean Association On-Farm Network®, we compared the yield components for different areas of 8 soybean fields from around the state. Overall we found that the number of beans produced was the most important determining factor when there were yield differences in the fields surveyed. Bean weight was the second most important factor. Plant height was not helpful at explaining yield differences, even when comparing differences within the same variety. If we look at the difference between the highest yielding part of the fields studied and an area on an eroded knoll in those fields (this is probably our closest comparison for moisture stress), neither plant population nor plant height could account for the yield differences we found. Last year the knolls had the 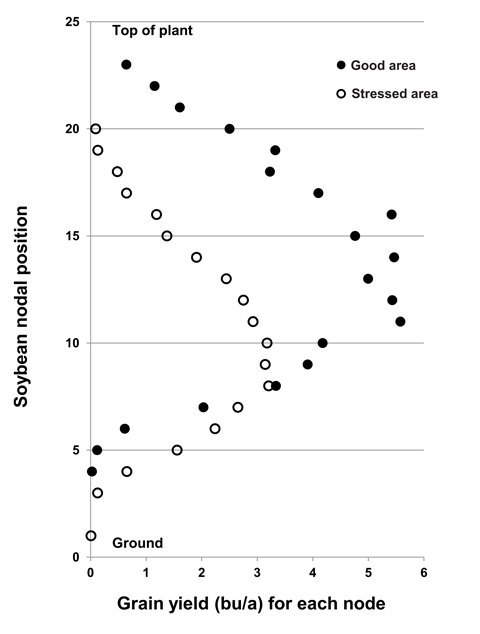 highest populations, possibly because of early wet conditions in lower areas of the field. This year, however, it appears population on the knolls is lower in many areas. That being said, beans in dry knoll area of the field yielded about 58% less than those in the best yielding area. Because we had counted pods per node and per plant, as well as seeds per pod and had weighed beans per node and per plant, we can conclude that 43% of the yield difference from the good part of the field compared to the knoll was due to a lower seed count per plant and 15% of the yield difference was because the seed was lighter on the knoll. The number of beans per pod was essentially the same in both areas, but the average number of pods per plant was lower on the dryer knoll. From this, we’d conclude that counting pods per plant this year would be an indicator of potential yield. It seems to be commonly believed that the few uppermost nodes on the plant make a big difference in yield. The data collected last season did not support this. In the same comparison between the knoll and best spot of the field mentioned above, the yield by node is shown in the graph. The solid circles are the high yielding part of the field and the hollow circles are from the knoll. Notice that the majority of the yield from the knoll came from the bottom half of the plant. Knowing that soybean plants abort pods during stress, we may not have pods where we want them this year. The color photograph shows a plant with only one pod formed near the lower nodes and only flowers above that. While soybean plants can compensate by adding pods later, counting the pods would seem to be a good way to monitor what’s happening with your soybean yields.
2012 Iowa Soybean Association On-Farm Network®. All rights reserved. ® On-Farm Network is a registered trademark of the Iowa Soybean Association. Portions of some On-Farm Network trials are paid for in total or in part by the soybean checkoff.

Alan Lomax Toward An Ethnographic Film Archive 1 This article appeared in Filmmakers Newsletter (vol. 4 #4) in February 1971 at a time when Alan Lomax was searching with energy and determination for footage of dance and work from around the globe to analyze in his Choreometrics project. The technology and paradigms for shooting color synchronous sound in the most remote locations had