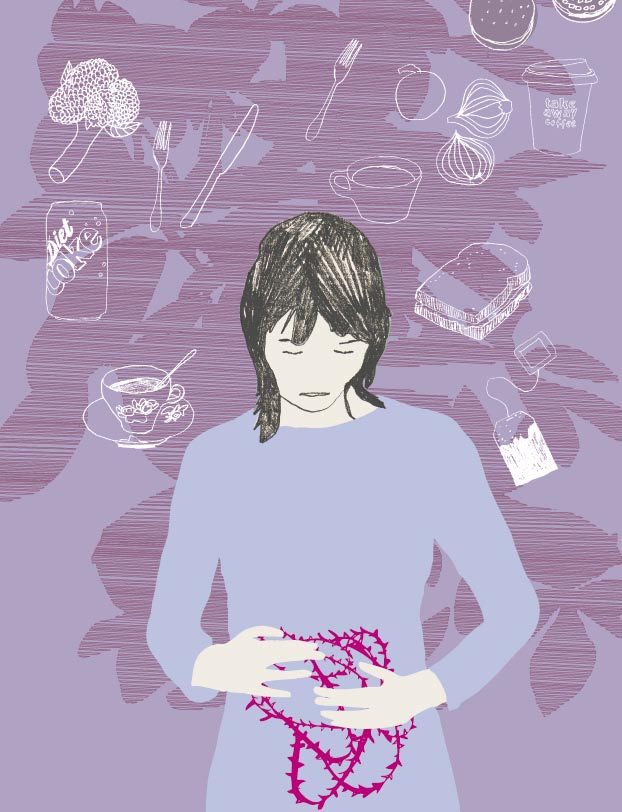 Hard to diagnose and
difﬁcult to cure, one
in three women are
Harriet Cooper, 30,
Judith Secombe, 42,
living with irritable
Red’s features editor
Red’s publisher
bowel syndrome.
SYMPTOMS Cramps,
SYMPTOMS Bloating,
bloating and
abdominal pain and
We sent two sufferers
ﬂatulence, diarrhoea
a low-level headache
to try out different
and constipation –
– like I’d had a few
especially after eating ‘trigger foods’
drinks – after eating trigger foods.
new treatments
such as sweetcorn or raw onion, or
I also feel tired after eating.
during really stressful times.
TYPICAL DIET I’ve been caffeine-free
Illustrations Karin Akesson
TYPICAL DIET I have one coffee a day,
for nine months, have yoghurt with fruit
and lots of ‘builder’s tea’, water and
and seeds for breakfast, a salad or
Diet Coke. Lunch is usually salad with
sandwich at lunch and meat/ﬁsh with
IBS: THE FACTS
chicken or feta and dinner a stir-fry or
salad or veggies for dinner, with fruit for
What is IBS? The most prevalent
pitta and houmous. I’m partial to the
snacks. But when I go on work lunches,
functional bowel disorder seen
odd cigarette and glass of white wine.
it’s difﬁcult to know what’s in each dish.
by GPs in Britain, with recent
LOOKING FOR A holistic, drug-free
LOOKING FOR A treatment that’s
research suggesting that up to
treatment to help prevent the onset of
credible and straightforward. I have
one in three of us endure a form
my IBS, not just treat the symptoms.
two small children and work long
of it. But the term IBS can cover
My GP has prescribed Mebeverine to
hours in a highly stressful job, so
many different bowel disorders
help ease spasms in the gut, but I hate
I don’t want anything too high-
causing abdominal pain and
taking medication.
maintenance or ‘ﬂuffy’.
changes in bowel habits.
TREATMENT TRIED THE
TREATMENT TRIED NOVO BLOOD
Symptoms? Tummy pain,
PALLARDY METHOD
TEST BY IMMOGENICS
bloating, constipation and/or
Two years ago, I would have happily
I’ve suffered for years with a sensitive
diarrhoea. Symptoms might
tucked into a Greek salad or a baked
stomach. Ten years ago, I was diagnosed
also include muscle or joint pain,
potato with tuna and sweetcorn. These
with candida and stuck to an exclusion
headaches, tiredness and nausea,
days I give them a wide berth, because
diet for two years. I lost two and a half
usually experienced after eating.
they contain my trigger foods for IBS. My
stone in the ﬁrst three months and it
Who gets it? It affects men and
IBS can be debilitating – sometimes it
alleviated some of the symptoms. But
women of all ages but it’s twice
gets so bad I have to cancel my evening
I was still tired, irritable and bloated. In
as common in women as in men.
plans. Sitting in the pub trying not to pass
recent years I’d convinced myself that
What’s the cause? The exact
wind isn’t my idea of a fun night out.
wheat and dairy were a bad idea, but my
cause is unknown, and many
So I was intrigued to hear about
system still reacted quickly and often
sufferers claim their doctors have
French osteopath, dietician, and physical
violently to other things I was eating.
called them neurotic. However,
therapist, Pierre Pallardy, whose patients
The Immogenics approach was
IBS is thought to be triggered by
have included Frank Sinatra and Audrey
confusing at ﬁrst. A blood test checks
food sensitivity, an imbalance
Hepburn. He believes the stomach is
your blood against a long list of foods
of natural bacteria in the gut, an
our second brain and claims that IBS
that provoke any type of response from
infection ‘hangover’ after a bout of
can be eliminated by self-massage of the
your white blood cells.
diarrhoea and emotional trauma
stomach, breathing techniques, a healthy
I was issued with a list of ‘green’ foods
and stress – in fact, most experts
diet and gentle exercise.
that it was okay to eat and ‘red’ foods that I
agree that stress plays a major role.
I visited Pal ardy at his practice on the Ile
shouldn’t, listed in order of the strength of
de Ré, in France. Having gently probed my
the response. (Immogenics also checks 7
Red August 2006
Red Xxxxxxxxx 2006 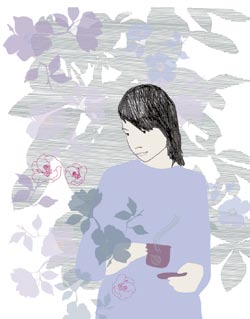 tummy, he pronounced it tight and cramped,
for candida and I was pleased I tested
which meant I was both tired and tense.
negatively.) There were a few surprises on my
Pierre also ordered me to slow down and
‘red’ list: apples (which I love), almonds, dates,
learn to relax. My exercise routine (spinning
broccoli and avocados – al foods I had never
classes, mostly) wasn’t ideal. Pierre believes
associated with feeling unwel . But it turned
very physical sports can aggravate the digestive
out that the main tummy culprit was yeast.
process. Instead I was to swim and walk.
Restricting myself to the ‘green’ foods,
I was to eat three healthy meals a day,
which includes virtually nothing processed,
slowly. I should avoid fried and spicy dishes,
was a challenge. So was the ‘avoid alcohol
white bread,
for ﬁve weeks’ instruction. Ideally, you are
pastries, biscuits,
supposed to stay off the booze for 10 weeks
‘I had to
chocolate, jam and
which gives your system time to adjust and
honey – which
allows the stomach wall to heal.
could aggravate
The diet was tough when I was out of the
my stomach.
house. Most prepared salads and dressings
contain an amazing array of ingredients, and
infusions and
lemon juice and mustard – both on my ‘red’
mineral water were
list – seem to be everywhere. Restaurants
to be my tipples.
were also hard because yeast is often hidden
I anxiously asked about white wine, which I
in things like stock. I discussed these
love. It was a relief to hear that wine can be
problems with the Immogenics nutritionist,
drunk in moderation.
who called me weekly. With her help, I was
Pierre then taught me how to massage
able to work the diet into my daily life.
my stomach. There are pressure points in the
On a couple of occasions, I ‘tested’ the
tummy, he said, which correspond to a different
system by eating something I wasn’t
organ, system or gland within the body. If the
supposed to. The reaction was fast:
1See your GP to be sure it’s not
something else.
self-massage is painful, there’s a dysfunction in
bloating, wind and discomfort. But I am
one of the organs. When Pierre massaged my
allowed to reintroduce some foods after
2Treat the pain – if it’s severe,
take a treatment to target
tummy, it was excruciating. But if I persevered,
ﬁve weeks, so I’ll have to see if a spell
the abdominal spasms such as
concentrating on the smal intestine point
avoiding them is enough to solve the
Buscopan IBS Relief, £4.39.
(situated below the navel) and the colon, for ﬁve
problem. Immogenics say avoiding your
minutes twice daily, the pain should disappear
trigger foods for a set time (ideally three
3Exercise regularly – walking
for at least 20 minutes a day
after a few weeks. While doing this, I was to
months) can help ‘desensitise’ your system
helps relieve stress and stimulates
inhale and exhale slowly and deeply into the
to them and therefore alleviate your body’s
peristalsis, the contractions of the
stomach, which would help my digestion, relax
reaction. And, as long as you don’t start
intestines essential to digestion.
the brain and calm the abdomen. ‘If someone
eating too much of them, the sensitivity
fol ows my treatment, they might lose 10 to 15
shouldn’t return.
4Identify trigger foods – keep
a food diary. Don’t assume your
years mental y and physical y,’ Pierre claimed.
DID IT WORK? My bloating disappeared
problem is due to wheat or dairy.
DID IT WORK? Although I missed my
morning caffeine ﬁx, the herbal teas grew on
immediately and
5Talk things through and relax –
don’t let your stress build up or
me. Breakfast ﬁlled me up; I no longer wolfed
you risk exacerbating symptoms.
‘Colleagues
my lunch; and at dinner-times I sat at a table,
fortnight I’d lost
rather than perched on a sofa. I immediately
weight. My
6De-stress – exercise is brilliant,
but balance it out with regular
began to appreciate what I was eating and to
relaxation. Try spending a day
chew more slowly.
concentration
doing absolutely nothing.
The self-massage, deep breathing and
improved and
swimming were easy to ﬁt into my routine. I
stayed level, and
7Get help – as well as your GP,
complementary help can make
felt slimmer, less bloated and was sleeping
work colleagues
a difference. Turn the page for a
better. My energy soared, and the IBS
noticed a rise in my energy levels; I felt like
guide to what’s available.
symptoms have lessened with my new pace of
I’d been plugged into the mains! Needless
NATIONAL GUT WEEK is from
life. As my stomach improves, so does my
to say, although I don’t fully understand the
August 21st to 27th. Call (020)
conﬁdence. There are still trigger foods I avoid,
science behind Immogenics, I think there’s
8743 4287; gutweek.org.uk.
but I feel more in control of the situation. I’m
deﬁnitely something in it. E
Visit ibs-relief.co.uk, corecharity.org.
not even craving coffee any more!
Novo by Immogenics costs £299, including
uk, ibsnetwork.org.uk or ibs-research-
Gut Instinct by Pierre Pal ardy (Rodale, £12.99). For
a blood test and guidance, available
update.org.uk for more information
a consultation with Pierre, cal (00 33) 546 092 129
from immogenics.com
ADDITIONAL
Red August 2006