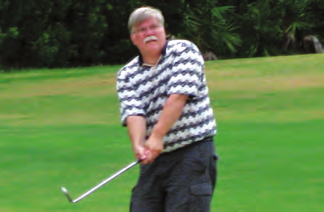 Despite technological innovations, in class include multiagent robotics, forms, playing with my kids, playing the Eletter is still, at its core, pretty mobile communication and sensor the guitar, and playing soccer. As a much the same as when Eduardo networks, biological systems, and for- Sontag started it—an e-mail-based, mation control. around time. It has become clear to that I recently finished with Meh- me, based on the feedback I have ran Mesbahi of the University of Eletter serves its rapid dissemination theory and the strong connections I am playing the guitar (with more purpose quite well. Q. You teach a course titled Net-
worked Control Systems. Please talk
about the syllabus and goals of that with the explicit aim of bringing the
students to the research frontier of nately, at the moment, I am nurturing Magnus: This graduate-level this emerging and exciting area.
oretic implications of having the Q. What are some of your interests
system consist of multiple dynami-
outside of research and teaching?
Q. Thank you for speaking with
Magnus: My nonprofessional inter-
CSM!
network. Applications that I cover ests all involve playing, in various Magnus: You’re welcome.
STEPHEN YURKOVICH
Q. Your paintings look somewhat
“van Gogh-ish.” Have you heard that
Steve: I’m going to pretend that’s a
ing me to touch many people. As CSM editor, I learned a lot about how to com- Steve Yurkovich of the Department of Sys- tems Engineering, University of Texas at Gogh and his famous masterpiece, Starry had a lot of help, so I owe a debt of grat- Dallas, playing golf on Jeckyll Isl and.
Night. Your readers may know the song itude to many folks on that account.
Vincent by Don McLean; it’s a sad song, back to painting and carving, but for but I always liked the lyrics. So, maybe now I have difficulty finding time to active in my professional society. that van Gogh spirit has somehow play golf, which I really enjoy.
Q. On a more serious note, you’ve to get involved in some capacity, be-
several years ago now, where I found devoted a huge amount of time and cause the payoff is very gratifying.
painting with acrylics to be very relax-
energy to IEEE Control Systems Soci-
ing. I owe thanks to my bride Tricia, ety (CSS) activities, including publi-
who has encouraged and motivated cations, governance, and conferences, mendous circle of lasting friendships
me through 34 years of marriage to sort of like being a member of the U.S.
challenge myself with things outside Supreme Court, the Executive Branch,
and Congress. Rather than ask you with the Student Activities standing
fession. What you may not know is to recount the many positions you’ve committee in the CSS. Traditionally,
that I also like wood carving and have
held, I’d like hear about what activities
you found to be the most satisfying.
Steve: You make this sound po-
my sons. One day I would like to get litical! Putting aside my political views (you don’t want to get me started down that path), this is an easy question. tomized application form for student Digital Object Identifier 10.1109/MCS.2010.939969 Date of publication: 16 March 2011 APRIL 2011 « IEEE CONTROL SYSTEMS MAGAZINE 41 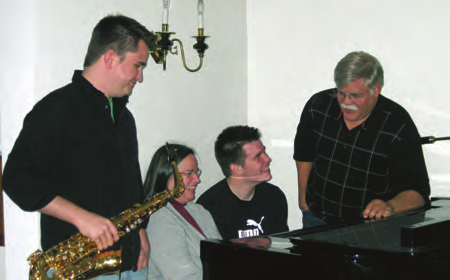 doing such things, I was able to have cation Award I received in 2008 meant so much to me and why I am now visibility because prior to that time the technical and professional activities, embarking on a new chapter in my work appeared through more than a rising through the ranks of the CSS in tute level at the IEEE. I recommend it programs in systems engineering as plishment to me than to know that my to all those who share similar goals. the founding department head. I am work has led directly to solutions that really excited about this transition in can be used in existing applications, Q. What led you to the systems and my career, and I am especially pleased literally driven in a production vehicle.
control field?
to be at such a dynamic environment Of course, I also recognize that many of Steve: My entry into the field was as the one at UTD—watch for excit-
serendipitous. I have to credit my ing developments over the next few been possible without the tremendous undergraduate Jesuit professors in years. Just as at Ohio State, at UTD I at the research center at Ohio State, so I feel lucky to have had that opportunity.
that I investigate the systems and cluding Mark Spong, M. Vidyasagar, control field. At that time (1977) the and Mario Rotea.
Q. What are your current and future
research objectives? Is there a partic-
systems was through an independent Q. Modestly speaking, of course,
ular advance that you’re aiming for?
study course and independent work which of your research accomplish-
Steve: Now that I have made a
in the lab, because Rockhurst had no ments are you the most proud of?
systems and control has also The Yurkovich family.
Steve: This question is more dif-
tinue the tutelage of the people who ficult than your others. In fact, the which has been application driven for influenced me. In fact, I used CSM question makes me reflect on the fact many years. So, check back with me in as a vehicle for making an impact in that the choice to go into the field of a couple of years for a more direct an-education even before I became edi- CSM editor in the early 1990s, asked disciplinary research and teamwork. I am aiming for is generally to con-me to play a role in two special issues devoted to control education. Later at over the years and have worked in principles to bear on meaningful Ohio State University I was able to de- such a wide variety of areas with so applications. I delivered a plenary talk local level for students interested in any particular accomplishment, espe- But because you press me for an I am talking about. The basic message answer, I would point to the body of was to revisit the traditional image of research in automotive powertrain a control engineer, as someone who shared my passion and worked with systems control. The research with my must see the big picture from a sys-me. That’s why the American Auto- students and colleagues at Ohio State’s Center for Automotive Research has are meaningful to industry. 42 IEEE CONTROL SYSTEMS MAGAZINE » APRIL 2011 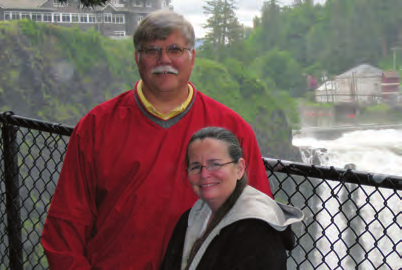 Q. How do you view the technologi-
him that I felt that students just didn’t was like to be a graduate student. Nev- cal niche in which CSS resides?
care much, that when I would look er, ever, put your professional interests Steve: Well, that’s probably your out and see students reading the daily before theirs because
toughest question. I have to stay on the campus newspaper, or looking out the success is tied closely to their perform- I have always felt that the niche of the attentive (not to mention not laughing to make huge sacrifices in nurturing control engineer is the impact made at my feeble attempts at humor), I natu- rally thought they just didn’t care. So, to hold their hand through everything work, while looking at the big picture. as I look back now I think I responded they do. Rather, it means that for them to While there are obviously still many by trying too hard to relate and some- unsolved theoretical problems, such times taking a reactive “don’t care” at- as in the areas of nonlinear control and hybrid systems, I would say that the those students who did “show an inter- control engineer can make the biggest est.” BJ straightened me out by telling more than they probably know, but that impact by solving problems that are ap- me that just because a student doesn’t they will most likely come to that reali- laugh at my jokes or doesn’t appear to zation at some later point in their career.
formulating mathematical structures be interested that doesn’t necessarily is ultimately extremely important but mean that he or she isn’t paying atten- Q. When you were editor of CSM,
is, I believe, on the periphery—the true tion and absorbing what I am saying. readers grew accustomed to hearing
niche is in bringing those theorems to Therefore, given that insight, I decided about your sons in your regular edi-
bear in solving engineering problems. to try to see things through the eyes of the torials. How are they doing now?
Steve: Thanks for asking, be-
awards. Last year BJ earned his master’s degree in mechanical en- Q. Do you have any advice on
teaching, especially for younger
faculty?
Steve: Now I can get philosoph-
Steve and Tricia Yurkovich at Snoqualmie Falls.
became a university professor. As my student and tried to put myself in their jazz combo every Friday evening. career progressed, I devoted so much seats. It’s hard to explain this somewhat profound change I went through, but school as a sophomore at Notre Dame pers, writing proposals, and courting because of this change my ratings in and still regularly plays the piano at sponsors, that I felt my teaching ratings undergraduate courses the past few school and in his spare time. James became a more experienced teacher. I with why you got into the profession editorials in the distant past) and very recall rationalizing this phenomenon by and never fall into the trap of thinking thinking that it had to be because I was getting older, and the age gap between as a teacher. Look at things through it next to impossible to “relate” to the put yourself in their place as you stand Q. Thank you for speaking with
CSM!
Steve: You’re most welcome. I have
to me, starting a few years back when of teaching is maintaining patience in always held CSM in high esteem, and my son BJ began his engineering de- mentoring Ph.D. students. At the risk the editors since I left have done a of waxing poetic, or diving into an even aged me in the classroom. I recall telling APRIL 2011 « IEEE CONTROL SYSTEMS MAGAZINE 43

CONTINUING EDUCATION TEST: Cardiac CT: Indications and Limitations 1. At this time, why is CCT not recommended as a routine screening test for CAD? A. Too much overlapping of adjacent structures can cause false-positive and B. There are not enough data on the increased risks of cancer from this procedure. C. At this time, it does not provide a 3-dimensional view of the heart, which can D. It