Termination is not the treatment of choice for severehyperemesis gravidarum: Successful managementusing prednisolone E Al-Ozairi MBChB MRCP*, J J S Waugh MBBS MRCOG† and R Taylor MD FRCP* *Directorates of Medicine; †Directorate of Obstetrics, Royal Victoria Infirmary, Queen Victoria Road, Newcastle upon Tyne NE1 4LP, UK Summary: Severe hyperemesis gravidarum causes profound maternal morbidity. Termination of pregnancy is still offered before the use of medical therapy. This report describes management of a woman who had undergone two previous terminations for hyperemesis, and additionally presents the dosage profile of prednisolone used to successfully manage a consecutive series of 33 women with severe hyperemesis gravidarum. The treatment protocol is described. The group had a median weight loss in pregnancy of 5.5 kg (range 2.0 – 12.5 kg), had been admitted on a median of 3.0 (range 0 – 9) occasions and had spent 7.5 (range 0 – 25) days on i.v. fluids. Continuing vomiting prevented oral steroid therapy in 14 women and i.v. hydrocortisone (50 mg t.i.d.; two women required 100 mg t.i.d.) was used initially for 24 – 48 h. Nineteen women commenced prednisolone 10 mg t.i.d. and this achieved suppression of vomiting within 48 h in all but two women who required 15 mg t.i.d. Two distinct subtypes of hyperemesis gravidarum were identified.
Remitting hyperemesis spontaneously ceases between 14 and 22 weeks gestation and accounts for approximately 80% of cases.
In contrast, full-term hyperemesis persists until minutes after delivery. These separate sub-types have not previously been described.
Steroid treatment of hyperemesis should be considered in women who fulfil the criteria of severe disease.
Keywords: hyperemesis, prednisolone, steroid therapy, vomiting, termination of pregnancy Hyperemesis gravidarum occurs with a range of severity, and A 28-year-old woman was referred for pre-pregnancy advice when vomiting is unremitting and unresponsive to standard about hyperemesis. She had suffered severe hyperemesis antiemetics, therapeutic termination is sometimes considered.
during her ﬁrst pregnancy in 2001 with weight loss from Two small series describing successful therapy using high-dose 72 kg to approximately 58 kg and admission to hospital for steroids were reported over a decade ago.1,2 A multicentre i.v. ﬂuids every one to two weeks throughout the pregnancy.
double-blind placebo-controlled one-week trial of prednisolone Therapeutic termination at eight weeks gestation was advised therapy in hyperemesis demonstrated signiﬁcant beneﬁts of because of severe hyperemesis in both 2003 and 2004. She steroids with respect to wellbeing, food intake and weight and her husband were extremely concerned about the prospect gain at one week, but did not have the power to demonstrate of frequent hospital admissions and debilitating illness during effect on readmission.3 Two prospective randomized studies the planned pregnancy that they very much wanted. She had have conﬁrmed that steroid treatment is superior to standard been offered admission during the ﬁrst 12 weeks of pregnancy antiemetic therapies.4,5 We have previously reported that by her local maternity unit. Apart from asthma she was healthy.
steroid therapy is uniformly effective in a consecutive series Her mother had suffered severe vomiting during pregnancy.
of women with severe hyperemesis as deﬁned by the criterion She was advised of the high likelihood of occurrence of of weight loss of .5% of pre-pregnant weight.6 However, severe hyperemesis in a fourth pregnancy. The effectiveness knowledge about steroid dosage regimens to achieve control of high-dose prednisolone in controlling hyperemesis was of hyperemesis is not widespread. In this report, we describe described. The potential maternal side-effects of steroids were successful management of a woman who had undergone two explained. The lack of clear evidence of side-effects on the previous terminations for hyperemesis, and document the baby was discussed. The possibility of requirement for predni- route and dosage of steroid therapy used in a consecutive ﬁve- solone throughout pregnancy was explained. She wished to proceed with conception on the basis that prednisolonetherapy would be commenced at the onset of severe nausea.
Prednisolone tablets were provided together with writteninstructions to take 10 mg t.i.d. from the time of onset ofsevere vomiting and to telephone for further advice.
She became pregnant within three months and experienced the onset of nausea and vomiting many times each day at six Obstetric Medicine 2009; 2: 34 – 37. DOI: 10.1258/om.2008.080046 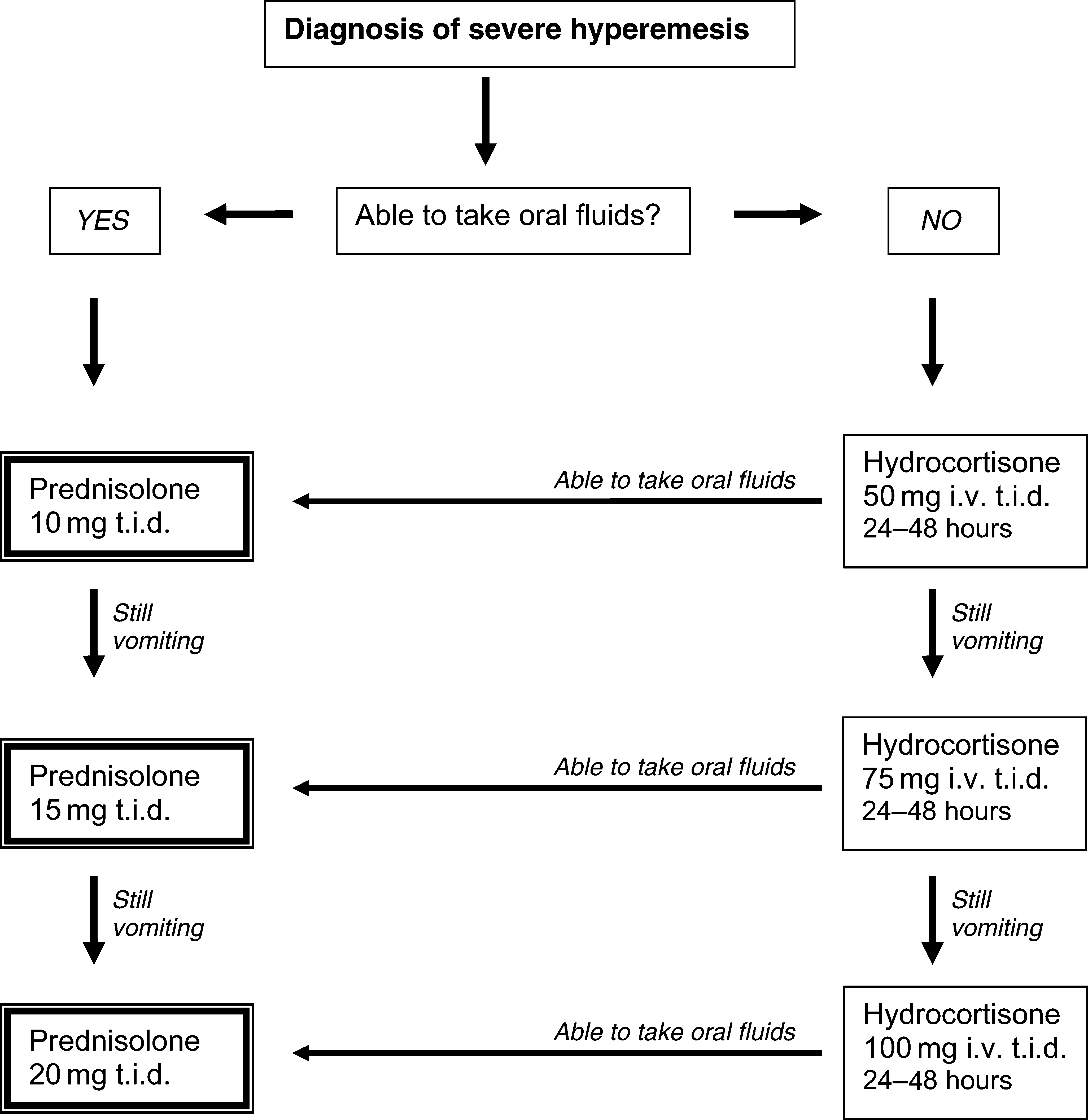 Al-Ozairi et al. Successful management of hyperemesis using prednisolone weeks gestation. Prednisolone was commenced as instructed.
The vomiting continued and the dose was increased to45 mg, then 55 mg daily over a three-day period. The vomitingthen stopped although nausea continued. By 10 weeks ges-tation, vomiting remained controlled on prednisolone 10 mgt.i.d. Severe nausea persisted and breakthrough vomiting at12 weeks necessitated short-term increase of prednisolone to atotal of 35 mg per day. By 18 weeks gestation she was wellenough to return to work on prednisolone 20 mg daily.
Several trials of decreasing the dosage below 15 mg per daywere all followed by return of vomiting and she remained onthis dose for the rest of the pregnancy.
Weight increased from 78.1 kg pre-pregnancy to 82.0 kg at 36 weeks gestation. She did not require hospital admission duringthe pregnancy. There were no obstetric complications and ahealthy baby was delivered at term. Bone densitometry sixmonths post-partum showed a z score in the normal range.
A consecutive series of 33 pregnancies complicated by severehyperemesis were identiﬁed in the preceding ﬁve years andcase-notes were available for the entire group. Each had beenreferred by her obstetrician to the obstetric medical service Newcastle guideline for management of hyperemesis.
and was judged to meet the criteria for commencement of Notes: (1) Initial i.v. fluid should be normal saline with 20 mmol steroid therapy. The index case is part of the case series. All potassium. Change to 10% Dextrose with potassium 24 hours women had received antiemetics without beneﬁt. The severity after thiamine first given (note that lactate administration usingHartmanns is not optimal and also contraindicated before thia- of the hyperemesis is reﬂected by the clinical characteristics.
mine replacement). (2) Vomiting may temporarily settle with The group had a median weight loss in pregnancy of 5.5 kg bed rest and i.v. fluids, allowing oral prednisolone to be com-menced. (3) Use ranitidine orally or i.v. if heartburn is present.
(range 2.0–12.5 kg) and had been admitted on a median of (4) Once vomiting is controlled and food intake has resumed, 3.0 (range 0–9) occasions. The mean duration of i.v. ﬂuid continue the required dose of prednisolone for 10 days, then requirement was 7.5 (range 0 –25) days. At the time of referral, advise decrease every week thereafter by 5 – 10 mg dependingon the degree of wellbeing. If vomiting recurs, go back to 27 of 31 women had marked wasting of leg muscles as shown immediately previous dose. (5) Prednisolone 1 mg is approxi- by inability to stand up from a squatting position without use of arms. There were 28 Caucasian, four Asian and oneAfrican woman. Other clinical features are shown in Table 1.
All women received thiamine prior to use of steroid.
days. Discharge from hospital was usually possible within Prednisolone or hydrocortisone therapy was administered as 48 hours of oral steroid therapy. Nausea usually persisted to shown in Figure 1. Continuing vomiting prevented oral a variable degree and ptyalism, if present, persisted for steroid therapy in 14 women, and for these women intravenous several weeks. In one woman ptyalism lasted throughout the hydrocortisone at a dose of 50 mg t.i.d. was used initially to pregnancy despite control of vomiting.
control vomiting and this was required for 24 –48 hours. Two After discharge, the dose of prednisolone was decreased at a women required hydrocortisone 100 mg t.i.d. to induce remis- rate of approximately 5 mg per week. Written instructions were sion of vomiting sufﬁcient to commence oral prednisolone.
provided so that if severe vomiting recurred, a return to the pre- Nineteen women commenced prednisolone 10 mg t.i.d. and vious dosage level was undertaken immediately. It was this achieved suppression of vomiting within 48 hours in all observed that most women reached a stable dose around but two women who required 15 mg t.i.d. After control of 15 mg per day and attempts to reduce below this level typically vomiting, the dose was continued unchanged for seven to 10 led to recurrence of vomiting until the natural history of hyper-emesis had run its course. The nausea remitted with character-istic suddenness between 14 weeks and 22 weeks in mostwomen and, thus, steroid dose could rapidly be decreased without return of symptoms. This did not occur in six women who experienced hyperemesis requiring suppression with prednisolone until term. In the latter women, nausea remitted within minutes of delivery. There was no difference in any of the presenting clinical features between those women whose condition remitted and those with full term hyperemesis. The dose requirement of prednisolone for each of these groups of women in relation to gestation is shown in Figure 2. The median duration of steroid use was eight (4 –20) weeks in the spontaneously remitting group and 25 (22 –28)weeks in the full-term hyperemesis group.