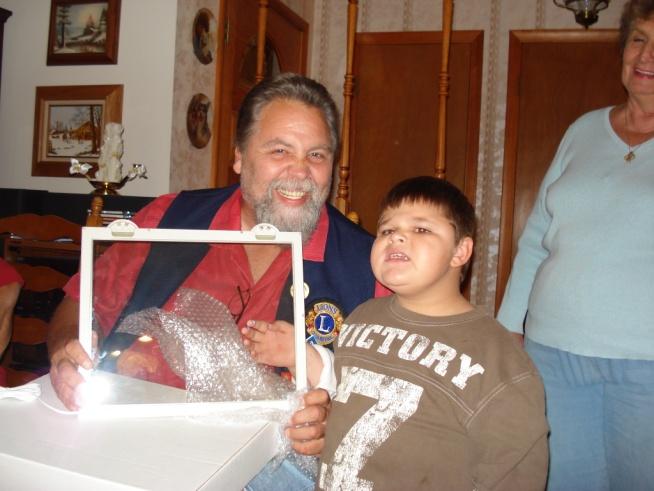 Lions Club helps Elk Grove boy
with computer screen donation
By Mary Jekielek Insprucker | Daily Herald Correspondent
Published: 10/24/2008 12:03 AM
For a parent, there is only one sound that matters. That
sound is the burgeoning "I have arrived" yelp of a
newborn.
Lion President Wayne Deasy (left) reacts to Justin's
great sense of humor as he presents him with a new
That sound never came for Gina and Don Wilch when Computer Touch Screen.
their first child, Justin Christian, was born in 1999. Instead, a weak cry would accompany his arrival, followed by the sick-to-your-stomach rumble of a hospital emergency transportation helicopter. Later, they would not spend time learning his dimples and tracing his tiny fingers. Instead, they would have to get up to speed with medical terms and medications like hydrocephalus, Dilantin, diabetes insipidus and Phenobarbital. Justin was born with bacterial meningitis, a potentially fatal inflammation of the membranous covering of the brain and the spinal cord. "When they told us, we were devastated," said Gina. "You're scared. You're just stunned." At one point, doctors informed the Wilches that Justin would probably die. Other outlooks, such as being 90 percent disabled, and not being able to walk, talk, or otherwise function normally, were just as grim. "We made a decision to put a DNR on him," Gina said of the do not resuscitate advice for medical personnel. "We didn't want to keep pushing to go further because he had already suffered so much. It was a very difficult decision. First you choose to have a child, and then you have to choose to let them go." After the heroic measures stopped, the miracle came. To this day, the doctors cannot explain it, but Justin got better. "The doctors have no idea what happened and they just couldn't understand it," Gina said. Since then, he's been helped by intensive therapies, along with being enrolled in the special education program at District 59. Justin, who is visually impaired, also uses his computer with a special Magic Touch Screen to propel him where doctors said he would never travel, into the world of reading and learning. When his Magic Touch Screen needed replacing, the Elk Grove Village Lions Club took up the cause and recently presented Justin with a new $231 screen. Since July 2007, the Elk Grove Village Lions Club made more than $34,000 in contributions to help with such causes. All donations are based on need. "We look at every case, and usually give out things once a year," said Ron Foster, donation chair. "But with special needs, we act as soon as we can as we did with Justin." Foster said he's impressed with what Justin has accomplished. "Justin was flown to Loyola with his chances slim to none. Now he's doing so much; this little guy is really something." Justin said he likes his computer and the program he has learned the most from is "Sesame Street." Anxious to get the Lions Club screen up and running, he said, "Daddy fix computer."

Graft versus host disease (GvHD) is a complication of allogeneic stem cell transplantation (SCT), in which the cells from the bone marrow or stem cell donor (graft) react to the cells in the patient (host). This booklet has been written to give you simple, precise definitions of GvHD and to help you to understand the implications of GvHD and its possible treatments. The booklet is designed to c