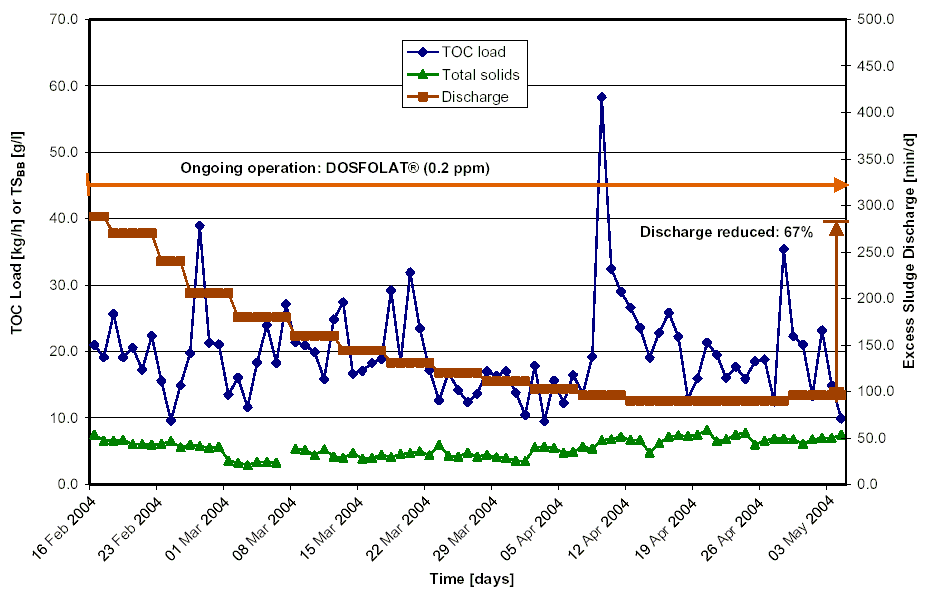 incidence of excess sludge can thus lead to a decrease or increase in the solids content of theactivation tank, depending on whether more is removed than is produced each day or less. Adecrease or increase of the solids content can thius occur even with a change in the sludgedischarge process after the introductory phase (15 days) of stabilized folic acid addition if the10% reduction of the discharge at the prescribed interval does not reflect the actual incidence ofexcess sludge. The load data for the activation tank system (for example COD load,) as well asthe history of the solids content in the activation tank, are thus to be taken into account.
The effect of the stabilized folic acid on the daily production of excess sludge can be seen inFigures 4 through 6.
Figure 4: ISP sewage treatment plant - TOC load as activation load magnitude,
reduction of the excess sludge discharge as well as the equilibrium solids content in
the activation tank
At the ISP industrial sewage treatment plant, due to alkylphenolic residues and higer CODconcentration (average 1200 mg COD/l), the ongoing operating dosage of stabilized folic acidafter the initial phase was set at 0.2 ppm (usually this is done only with levels above 2,000 mgCOD/l, below that 0.1 ppm is typically used). During the conversion of the sewage dischargeregime of the ISP sewage treatment plant (Figure 4), a decline in the solids content wasinitially observed in the activation process. Later in the process, with increasing reduction of theexcess sewer discharge, the initial solids content is restored. The mean TOC load (TOC load) inthe observed period did not change and is within the usual fluctuation range for sewagetreatment plants. At the end of April the excess sewage discharge increased slightly, as thesolids content increased. At this point, more sewage was discharged than was produced on adaily basis. The time history of the operating parameters indicates that a “cautious approach” tothe newly adjusted equilibrium achieved by the stabilized folic acid between the excess sewagedischarge and the increase in excess sewage is required, in order to draw off only the excesssewage which is actually produced during a certain period. 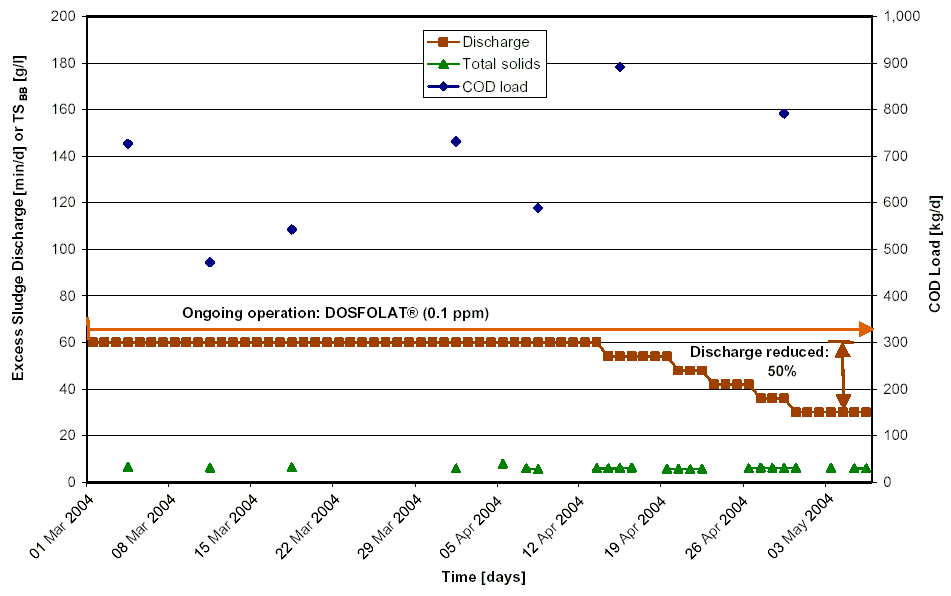 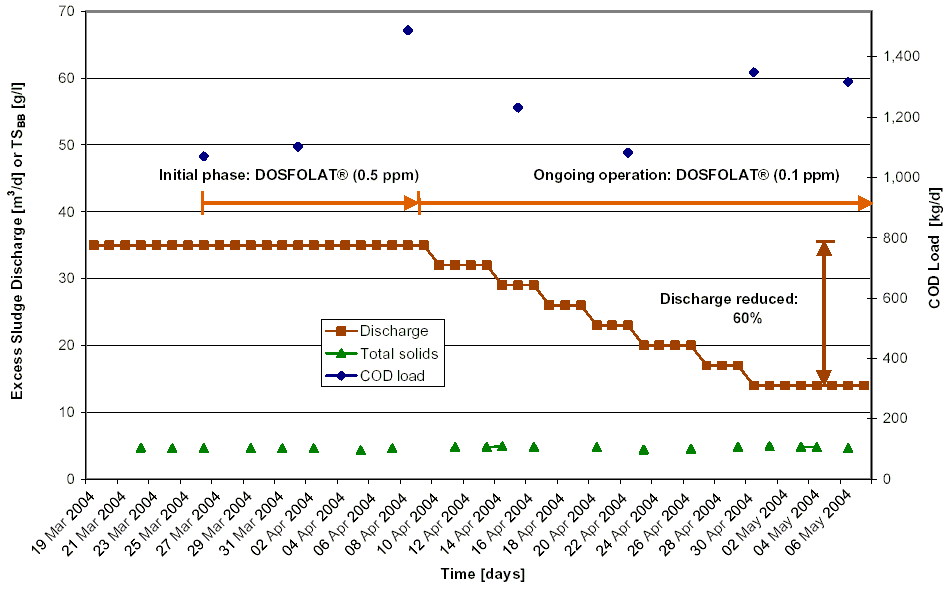 Figure 6: The treatment plant LSP - COD load as activation load
magnitude, reduction of the excess sludge discharge as well as the equilibrium
solids content in the activation tank
In contrast to the ISP treatment plant, the age of the sludge in the MEG and LSP treatmentplants (both with aerobic sludge stabilization) prior to dosing with stabilized folic acid wasabove 30 to 40 days, whereas at Sasol it was significantly less than 20 days. At the ISP plantvariations of the solids content in the activation tank were documented during the investigations.
Similar results have been observed in the tests currently in progress at the sewage treatmentplant in Bavaria (the sludge age was also less than 20 days here before theaddition of stabilized folic acid). At the MEG and LSP facilities, however, nosignificant change in the solids content was observed. Whether this should lead to theconclusion that plants whose sludge is less than 20 days old will experience periodic changes inthe solids content (at otherwise equal loads) during the establishment of a new equilibrium statewhen compared with plants having older sludge, and whether these plants should have the timeinterval for 10% reductions of the excess sludge discharge extended to about 7 days instead ofthe 3 to 5 for plants with older sludge needs to be clarified through additional operationaltesting.
As part of operational testing with stabilized folic acid, changes in the biocoenosis weredocumented once a week by microscopic studies. It was found that the higher microorganismsdeveloped somewhat more slowly given the same feed of active biomass and the acceleration ofmetabolic processes in the sludge activation system, despite the fact that the age of the sludgewas doubled more or less as a result of reductions in the discharge of excess sludge.
Summary and future prospects
Due to its instability in aqueous solution, the vitamin folic acid is not present at high enoughlevels in the biocoenosis of treatment plants and therefore has a limiting effect on the metabolicprocesses of sludge activation. Folic acid is particularly important in regulating the 1-carbonmetabolism of the microorganisms and leads to an increase in metabolic activity.
DOSFOLAT®XS, which contains stabilized folic acid as its active ingredient, allows theexternal addition of folic acid to sewage treatment processes. The continuous dosing rate ofstabilized folic acid for moderate dry weather runoff triggered over a 24 hour period is designedto be 0.5 ppm initially ("shock dosing") and thereafter the operating dosage is 0.1 ppm.
According to the information currently available, evaluations of initial operation testing with thisproduct in Germany indicate that a reduction in excess sludge on the order of 45 ± 15% ispossible. No habituation has been observed in the process even after years of DOSFOLAT®use. DOSFOLAT®XS is available as a concentrate that is easy to administer and has aneffective delivered and has the effective power per kilogram of about 25 to 30 kg ofunstabilized folic acid.
Further investigations, for example for evaluation of the effects of stabilized folic acid on thereduction of the residual load in separated sludge water from sludge dehydration, increase of theprocess stability as well as release of additional tank capacity (reaction volumes) in facilitieswhose capacity is at full use or overloaded will be the object of future research projects.
Contact:
Jörg Strunkheide, Dr. Ing.
IWB Institut Wasser und Boden e.V.
Oelgartenstrasse 18 † 53757 Sankt Augustin, Germany
Phone: +49 2241 341087 † Fax: +49 2241/334042
E-mail: www.iwb-bonn.de
References

Attention Deficit Hyperactivity Disorder (AD/HD) Attention Deficit/Hyperactivity Disorder (AD/HD) is a set of behaviours that usually show themselves in earlychildhood. The symptoms in children with ADHD are unlike the normally rambunctious behaviour of theirpeers. If not addressed, these behaviours can cause trouble for them at home, at school, and in thecommunity. There are three groups of

P H A R M A N E X ® P R O D U C T I N F O R M AT I O N PA G E PROMOTES HEALTHY ENERGY LEVELS* Positioning Statement Who Should Use This Product? The herbs in Energy Formula work together to provide optimal syn-Energy Formula is designed for people suffering from occasional fa-ergism and support the body's ability to reduce mental fatigue andtigue. This product offers an immediate, but