REVIEW ARTICLE
Swertia chirayita – an overview
P. Joshi1,* and V. Dhawan2
1TERI School of Advanced Studies and 2The Energy and Resources Institute, Darbari Seth Block, Habitat Place, Lodhi Road, New Delhi 110 003, India
widespread use. Chirata is called Anaryatikta, Ardhatikta, Swertia chirayita is a medicinal plant indigenous to
Bhunimba, Chiratika, Chiratitka, Haima, Jvarantaka, temperate Himalaya. Its medicinal usage is reported
in Indian pharmaceutical codex, the British and the
Kairata, Kandatiktaka, Kiranta, Kirataka, Kirata Tikta, American pharmacopoeias and in different traditional
Naditikta, Naipala, Nepalanimba, Nidrari, Ramasenka, systems of medicines such as the Ayurveda, Unani and
Sannipatha, Sutiktaka, Trinanimba, and Viktaka5,6 in Sanskrit, Siddha. The plant is used as a bitter tonic in treatment
Cherayata in Patna, Chirrato and Chiraita in Nepal, Chi- of fever and for curing various skin diseases. S. chirayita
raita and Kiraita in Mumbai, Chirayatin in Gujarat, Chireta has an established domestic (Indian) and international
in Bengal, Nilaveppa in Kerala, and Sekhagi in Burma. It market, which is increasing at a rate of 10% annually.
is also called Chiaravata (Urdu); Qasabuzzarirah (Arab, Farsi); The plant available in the market many a times is adulter-
Charayatah (Deccan); Nelabevu (Kannada); Nenilawandi, ated and substituted by close relatives of chirata.
Nilavembu, Shirattakuchi (Tamil). The trade name of S. This article briefly reviews the botany, pharmacology,
biochemistry, market demand and trade of the plant.
The plant is a native of temperate Himalayas, found at This is an attempt to compile and document information
on different aspects of S. chirayita and highlight the
an altitude of 1200–3000 m (4000 to 10,000 ft), from Kashmir need for research and development.
to Bhutan, and in the Khasi hills at 1200–1500 m (4000 to 5000 ft)6,8. It can be grown in sub-temperate regions between 1500 and 2100 m altitudes9. The genus Swertia Linn. Keywords: Amarogentin, bitter, hypoglycemic, swer-
consists of annual and perennial herbs. There is no consis- tency in the literature citing the habit of Swertia chirayita. Some authors have described chirata as an annual5,6 and AMONG the different species of Swertia reported in India, others as biennial or pluri-annual10. It is not clear whether Swertia chirayita is considered the most important for its the plant behaves differently due to climatic conditions or medicinal properties. The bitterness, antihelmintic, hypo- varying genotypes. The plant can be grown in a variety of glycemic and antipyretic properties are attributed to ama- soils with sandy loam rich in carbon and humus. It is also rogentin (most bitter compound isolated till date)1, found in open ground and recently slash-and-burnt for- swerchirin, swertiamarin and other active principles of ests10. S. chirayita has an erect, about 2–3 ft long stem, the herb. Herbal medicines such as Ayush-64, Diabecon, the middle portion is round, while the upper is four-angled, Mensturyl syrup and Melicon V ointment2–4 contain chirata with a prominent decurrent line at each angle. The stems are extract in different amounts for its antipyretic, hypogly- orange brown5 or purplish in colour9, and contain large con- cemic, antifungal and antibacterial properties. Despite a tinuous yellowish pith. The root is simple, tapering and descent hold in the herbal industry, the plant is still collected stout, short, almost 7 cm long and usually half an inch from the wild; it is sparsely cultivated and negligible efforts have gone into developing proper agro-techniques of the Cytological work done on the species is poor. Khoshoo plant. Little research has been done to identify the existing and Tandon11 used pollen-mother cells for cytological diversity among different populations of S. chirayita. The studies in some Himalayan species of Swertia. The authors lacunae in the related research field raise concerns regard- counted thirteen bivalents at metaphase I, and observed ing the vulnerability of the species, emphasizing the need that one of them was bigger than the rest. Flowering in S. chirayita is in the form of numerous small, axillary, opposite, lax cymes arranged as short branches Swertia chirayita – the plant
and the whole inflorescence is 2 ft long. Flowers are small, stalked, green-yellow, tinged with purple colour, Swertia chirayita (Roxb. ex Fleming) H. Karst. is also rotate and tetramerous6,9 (Figure 1). The corolla is twice mentioned in the literature as Swertia chirata, Buch.-Ham.; as long as the calyx and divided near the base into four Ophelia chirata Grisebach.; Agathotes chirayita Don.; ovate–lanceolate segments. The upper surface of the petal Gentiana chirayita Roxburgh5–8 and Gentiana floribunda has a pair of nectaries covered with oblong scales and ending Don8. It is known by an array of names, suggesting its as fringes9. Fruit is a small, one-celled capsule with a trans-parent yellowish pericarp. It dehisces from above, septi- *For correspondence. (e-mail: [email protected]) cidally into two valves. Seeds are numerous, minute, CURRENT SCIENCE, VOL. 89, NO. 4, 25 AUGUST 2005 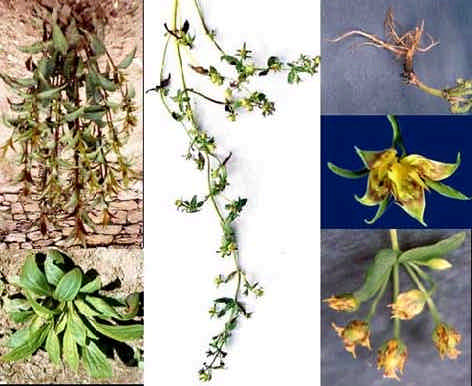 Subject: Panic Disorder Clinical Practice Guideline Policy Number: NMP472 Effective Date*: December 2005 Updated: November 2007, May 2009, May 2010, May This National Medical Policy is subject to the terms in the IMPORTANT NOTICE at the end of this document Overview Panic Disorder (PD) is a treatable condition that is estimated to affect about 6 million

Information Bulletin [email protected] Parallel Synthesis - Reductive Amination of Aldehyde Group Parallel optimisation of reductive amination of substitutedfurane-2-aldehydes to 2-dialkylaminofuranes (4 x 24 sam-ples) by using the BÜCHI Syncore Reactor with its Filtra-tion Unit. The reaction itself, drying and evaporation of or- http://synthesis.buchi.com ganic extracts are accelerated by u