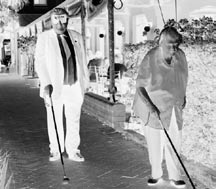 Health risks from medicine misuse
Bouquets & brickbats
by Robert Newman
Australians’ blasé attitude towards medicines use combination pain relief products for is leading to further health problems for many and is placing avoidable pressure on our Bouquets to:
Karen Kaye, acting CEO of NPS, an independent organisation enabling people to be medicine- Willoughby Mayor Pat Reilly on
wise, says people need to start thinking more "Pharmacy sales of over the counter pain kil - seriously about non-prescription medicines.
‘blind’ with local resident Betty Stone to help ers containing codeine were restricted in May “Just because a medicine can be purchased this year because misuse was resulting in an without a prescription doesn’t mean it’s risk- unnecessary number of serious side effects and hospitalisations. Codeine has numerous side effects and interactions with other medi- cation as well as its potential for dependence.” answer your questions regarding pain relief medication. I would encourage people to dis- cuss side effects, interactions and appropriate of Australia has detailed serious health doses of all pain medication, no matter how effects in patients who misused pain kil - safe they are regarded, with their pharmacist ers containing ibuprofen and codeine. It notes more than half a mil ion Australians Raleigh St stays in conservation area
Wil oughby City Council decided at a special
future residential site if and when Channel meeting on November 3, one of the ‘soldiers 9 vacates” it. The report suggests suitability & sailors’ – Raleigh Street – was to remain of properties adjacent to the site for medium a conservation area, which leaves 44A, 44B density housing can be reviewed at this time. Bunnings for service. A gentleman came in
and 46 Elizabeth Street still recommended The land in Walter Street, known as site 21 trying to buy a plastic sieve with similar sized in the residential report, is proposed for R3 holes to the shopping basket. They didn’t stock them so they scanned the bar code on the basket and sold it to him for under $8. officers reconsider their recommendation Woodhams told the Artarmon Gazette All the Artarmon residents who turned up another decision at the special November 3 at the Abbott Lane meeting on October
Development. Although the APA agrees this meeting was that the council would investigate 14 and expressed their view forceful y to the clause does not imply any prima facie support whether the west side of Rimmington Street, Department of Education and Training’s three for demolition, it continues to make the point on Artarmon’s west side, might be appropriate there are virtual y no free standing houses in the east Artarmon conservation area that are Brickbats to:
The WCC economic viability study had looked in such poor quality or state of neglect that at George Place for rezoning as R4 – high The Department of Education and
density residential – but did not recommend Training for its compulsory acquisition of
This clause may be applicable to other conser- it. The council argued there were valid reasons Abbott Lane without community consultation vation areas in the municipality but is neither for not rezoning this area because a supply of relevant nor useful when assessing develop- existing industrial land was needed, particularly The cyclist spotted riding alongside parked
ment proposals in the Artarmon conservation for the service industry in the LGA, providing cars in Hampden Road, in the opposite direc- area and has the potential to be detrimental.
tion to the oncoming traffic, being a law R3-R4 alternatives: The WCC report notes
unto himself instead of fol owing traffic rules the Channel 9 site is seen as “a potential which are the same for all vehicles, including bicycles. Artarmon GAZETTE Edition 52 - November 2010