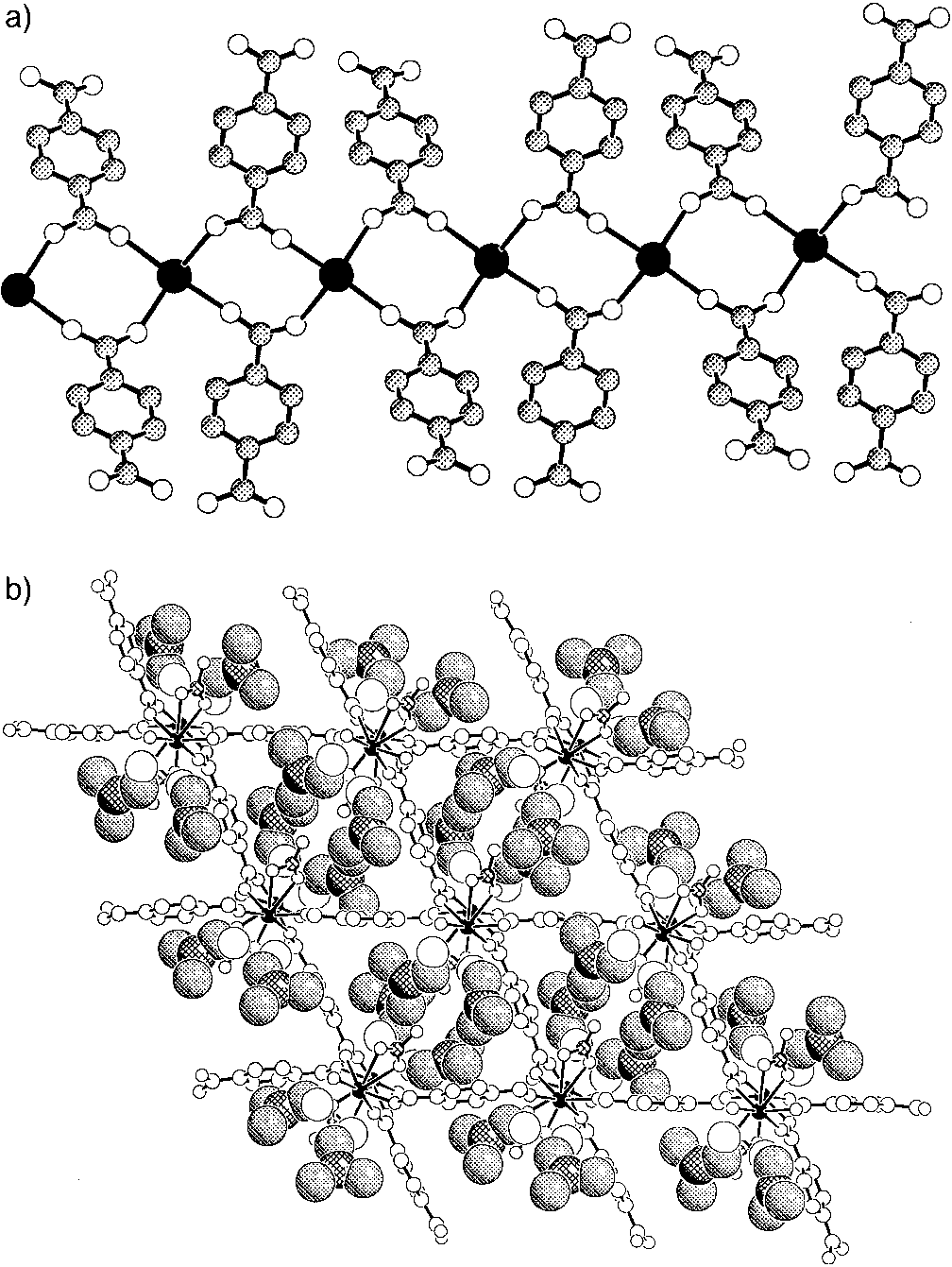 nent microporosity even in the absence of guests, an aspect that is routinely considered for zeolites[2] but has remained largely unexplored for the analogous metal ± organic materi- als.[3] In attempting to address this issue, we aimed at coupling our interest in designing new frameworks with the desire to achieve stable microporous structures. Here we report the synthesis and structure of Tb(bdc)NO3 ´ 2DMF (bdc  1,4- benzenedicarboxylate; DMF  N,N-dimethylformamide) and show that its desolvated derivative Tb(bdc)NO3 has a stable zeolite-like framework that is capable of reversible molecular sorption and of maintaining microporosity in the absence of Previous studies on the copolymerization of ZnII with BDC have shown that stable frameworks can be produced.[3d, 4] This was attributed to the bis-bidentate functionality of BDC and its tendency to form large, tightly bound metal carboxylate cluster aggregates that ultimately act as building blocks in the crystal structure. We sought to extend this strategy to the pursuit of lanthanide ± organic open frameworks, which remain virtually unknown, despite the established role of lanthanide compounds sensor technology.[5] Deprotonation of the acid form of BDC (H2BDC) with pyridine followed by its copolymerization with TbIII in methanol/DMF at room temperature gave a crystalline color- less solid, which was formulated as Tb(bdc)NO3 ´ 2DMF on the basis of elemental analysis and single-crystal X-ray diffraction.[6, 7] Complete deprotonation of BDC was con- firmed by the absence of any strong absorption bands due to protonated carboxyl groups (1715 ± 1680 cmÀ1) in the FT-IR Figure 2. a) Tb ± BDC chains shown perpendicular to the c axis. b) A spectrum.[6] This material is stable in air and is insoluble in projection along the c axis with DMF shown in space-filling (C, shaded; N, common organic solvents such as methanol, ethanol, acetoni- cross-hatched; O, open) and the Tb ± BDC ± NO3 framework as ball-and- stick (Tb, filled; N, cross-hatched; C and O, open) representations.
Hydrogen atoms are omitted for clarity.
The single-crystal structure analysis revealed an extended Tb ± BDC framework with two crystallographically distinct Tb atoms, BDC units, nitrate ions, and four DMF ligands. The BDC to form a three-dimensional network (Figure 2b) in two Tb atoms are each coordinated by eight oxygen atoms: which the nitrate anions and DMF molecules point into the One each from four carboxylate groups of different BDC channels. The topology of the structure is best described in ligands, two from a nitrate anion, and one from each of two terms of a simple (3,4)-connected net derived from the DMF molecules (Figure 1). The framework is composed only 4-connected net of the PtS structure (Figure 3a and b). In this of Tb and BDC, whereby each carboxylate moiety bridges two case, each of the planar 4-connected vertices (filled circles) terbium atoms in a bis-monodentate fashion to form chains are split into pairs of 3-connected vertices that share a along the c axis (Figure 2a). These chains are cross-linked by common link.[8] As shown in Figure 3c, the 4-connected Figure 1. The asymmetric unit of crystalline Tb(bdc)NO3 ´ 2DMF; atoms labeled by the letter A are related by symmetry to those  WILEY-VCH Verlag GmbH, D-69451 Weinheim, 1999 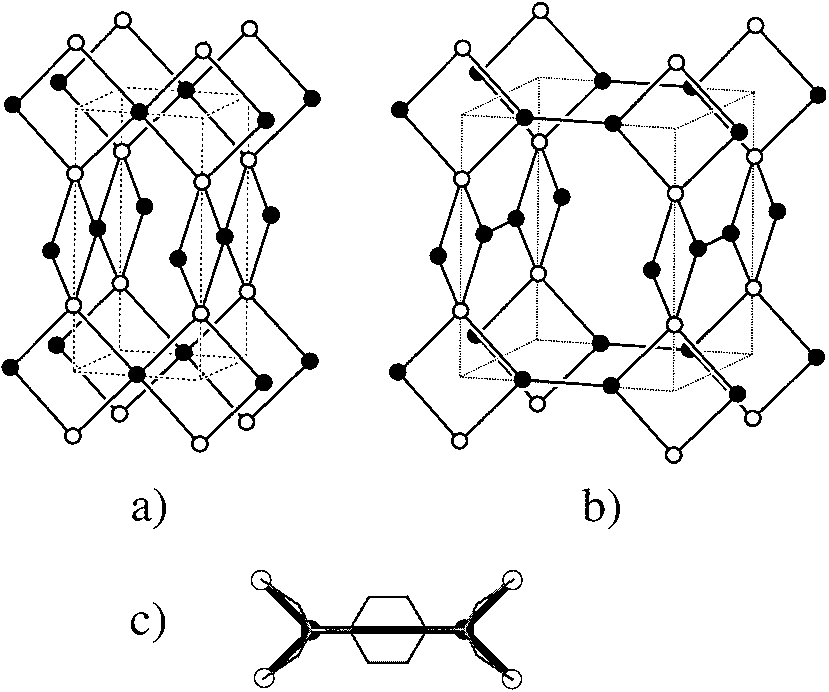 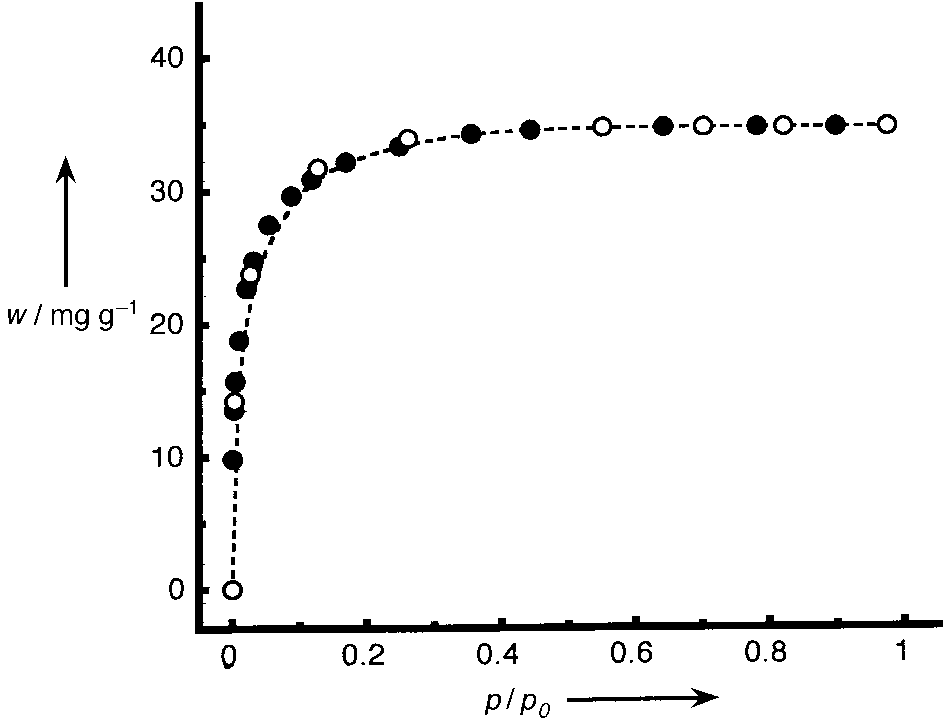 195 K. When no further weight change was observed, a single isotherm point was recorded. A plot of weight sorbed per gram of Tb(bdc)NO3 versus p/p0 (p0  saturation pressure; 780 Torr for CO2) revealed a reversible type I isotherm (Figure 4), characteristic of a microporous material with Figure 3. a) The 4-connected net of PtS (S, open; Pt, filled). b) The (3,4)- connected net of Tb(bdc)NO3 ´ 2DMF that is derived from (a) by converting the planar 4-connected vertices (filled) to pairs of 3-connected vertices. c) Schematic identification of the atoms in the crystal structure of Tb(bdc)NO3 ´ 2DMF with net vertices; open circles are Tb atoms [4- connected vertices in (b)] and filled circles are carboxylate C atoms of BDC [3-connected vertices in (b)]; the benzene ring of BDC is super- imposed on the link between 3-connected vertices.
Figure 4. CO2 sorption (dark circles) and desorption (open circles) vertices are the Tb atoms which are connected through ÀOÀ isotherm for Tb(bdc)NO3 plotted with sorbed amount w versus relative links to the carboxylate C atoms of BDC (the 3-connected pressure p/p0 (p0  saturation pressure).
vertices); these are in turn joined in pairs by ÀC its highest symmetry form the network is tetragonal, space zeolite-like sorption behavior. The pore volume was estimat- group P42/mmc, but the symmetry is lower (P21/c) in the ed from this data by using the Dubinin ± Raduskhvich equation to be 0.032 cm3gÀ1, which is comparable to that of To create an open framework with accessible voids, we common zeolites.[2a] Applying the same technique at room examined the possibility of removing the DMF ligands by temperature for the vapor sorption, we found that dichloro- means of a thermogravimetric (TG) study. A sample of the as- methane (4  kinetic diameter) is readily sorbed into the synthesized material (46.87 mg) showed an onset of weight pores of Tb(bdc)NO3 with a type I isotherm. However, loss at 1208C that terminated at 2238C with 27.1% total weight sorption of cyclohexane was not observed due to its larger loss, which is equivalent to the removal of 1.97 DMF molecules per formula unit (calculated: 27.5%). The FT-IR The dissociation and removal of DMF from the channels spectrum of the remaining solid Tb(bdc)NO [9] means that terbium becomes coordinatively unsaturated in absorption bands to those of the original solid, albeit with the resulting porous solid. Exploring the chemistry of such minor differences due to the removal of DMF. Its X-ray Lewis acid sites may reveal their potential use in sensors or as powder diffraction pattern was significantly broadened with catalysts for organic transformations. On studying the solution only two discernible diffraction lines; this indicates a degra- stability of the porous framework, we observed that immer- dation of long-range order. However, the fact that sion of the evacuated solid in water results in its quantitative Tb(bdc)NO3 did not show any weight loss up to 3208C and irreversible conversion to another recently reported suggested the presence of a stable framework material. Re- porous solid, namely, Tb2(bdc)3 ´ 4H2O.[5a] Nevertheless, sorption of DMF into the solvent-free material resulted in Tb(bdc)NO3 appears to be unaffected by organic solvents, regeneration of the most prominent diffraction lines of the as- and this allowed allowed the study of its inclusion chemistry.
The solution sorption isotherms for methanol, ethanol, and To determine the microporosity of Tb(bdc)NO3, the gas isopropyl alcohol are shown in Figure 5. A known amount of sorption isotherm was measured. Initially, we confirmed the the evacuated solid (30 ± 40 mg) was immersed in a solution in loss of DMF from the original solid by placing a sample of toluene containing a specific amount of a potential guest Tb(bdc)NO3 ´ 2DMF (151.50 mg) in an electromicrogravimet- (0.10 ± 0.90m). The change in guest concentration was then ric balance (CAHN 1000) setup at room temperature under measured by gas chromatography with a thermal conductivity vacuum (5 Â 10À5 Torr). Then the loss of DMF was monitored detector. Each equilibrium point was obtained by monitoring by heating to 135 and 1858C at 0.15 KminÀ1. The total weight the change in guest concentration with time until no further losses of 18.68 (1.35DMF) and 26.97% (1.97DMF), respec- change was observed.[10] The sorption process was successfully tively, confirm the TG results. At this point, carbon dioxide modeled with a 1:1 complex as suggested by the Langmuir (UHP grade) was introduced into the sample chamber isotherm equation (assuming equivalent available sites), and containing the completely evacuated sample, and the weight all compounds showed good agreement to the model with changes were monitored at different pressure intervals at high nonlinear regression parameters (typically 0.99). The  WILEY-VCH Verlag GmbH, D-69451 Weinheim, 1999 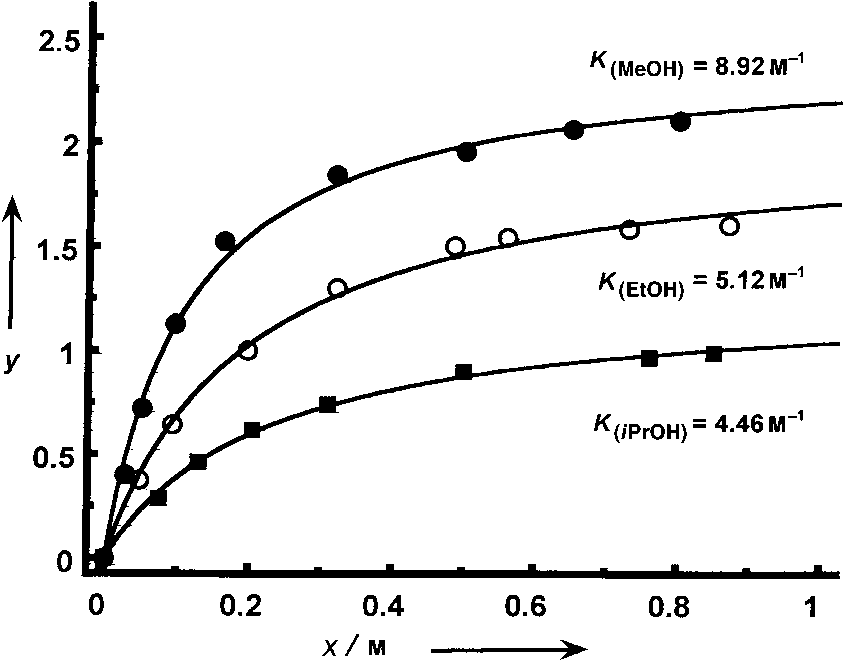