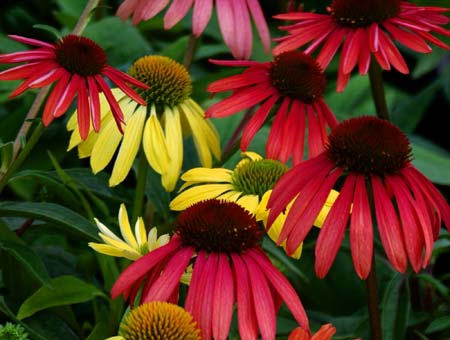 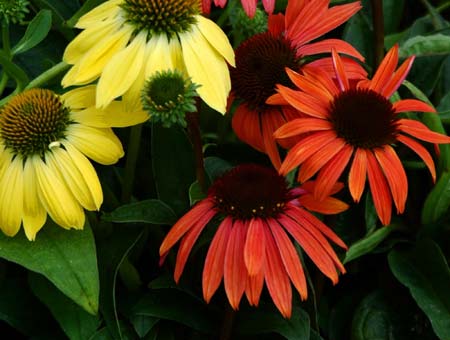 ENHFL04-008
Warm Climate Production Guidelines for
Echinacea
Dr. Rick Schoellhorn and Alexis A. Richardson
Keywords: coneflower, novelty crops, vernalization, medicinal crops, perennial, commercial crops
Echinacea – Celebrate diversity
strong purple toned flowers a vast improvement over
the species. It received the Perennial Plant
Association “Plant of the Year” award in 1998. There
have been an assortment of varying tones of purple
to rose to cerise toned hybrids over the years, with
some really cool novelty forms popping up in fringe
markets as well. It is through the work of Jim Ault at
the Chicago Botanic Gardens and Richard Saul that
we are looking at the release of yellow and orange
toned hybrids that combine striking colors with
strong performance. The release of these new lines
indicates that we will soon be seeing all the other
shades of color between red and yellow on the
market in the next few years.
ItSaul Plants - Richard Saul of ItSaul’s plants has
been breeding Echinacea for about ten years and
the releases coming out of ItSaul’s program are
revolutionary. Scheduled for release in early 2005
are two cultivars in the Big Sky series. SunrisePPAF is
a clear pale citron yellow and SunsetPPAF is a strong
orange. For release late in 2005 (summer or fall) is
TwilightPPAF a rose with a red cone. The flowers of
these newer rose toned hybrids are actually a lot of
different iridescent tones and a little hard to
describe, but truly beautiful! For 2006, and later, be
looking for bi-colors, dark yellows, peach, coral and
other intermediate shades. Saul’s releases are
crosses between Echinacea purpurea and E.
paradoxa, but the Big Sky Series resembles E. Mixed Echinacea hybrids exhibiting the new
purpurea with broad deep green leaves, overlapping color forms being released in 2004-5. Photo
petals, and multiple blooms. The Big Sky Series is courtesy of ItSaul Plants
coming out of tissue culture and only available as a vegetative liner. Both Sunset & Sunrise are in This is one of the great moments in time when a licensed to propagation to a variety of plug renowned but limited perennial flower has the roof producers, but there is likely not going to be enough blown off of its genetic potential. The advances in of this crop to go around the first year, place orders Echinacea breeding we will be seeing emerge on early. The Big Sky series has a long shelf life as a the market in the next few years are some of the most exciting changes I’ve seen a long time. I’m hoping this is the beginning of not only some The Chicago Botanic Gardens – Jim Ault with The
fantastic new hybrids but also increased awareness CBG also released the first of their new hybrids in 2004. The Meadowbrite SeriesTM beginning with Orange MeadowbritePPAF is emerging in exclusive Magnus has ruled the roost for many years. It is a catalogs and select nurseries (See suppliers’ listings great seed produced cultivar (E. purpurea) with below). The flower is a strong orange tone with more Warm Climate Production Guidelines for Echinacea 1

ENHFL04-008
the leaf type of its E. paradoxa parents. That means temperatures as flowers color up will also give the leaves are thinner and more strap-like and flower MeadowbritePPAF is a yellow toned release. Lots of Light level – High light or over 1000 µmol m-2 s-1, for colors including the elusive rose tones are coming in most green leaved cultivars, however variegated 2005 and beyond. Same story for the Chicago types may need lower light levels to avoid scorching. releases; supplies are limited and many suppliers Propagation – Patented varieties aside, division and softwood cuttings are easy to grow, but most Other great novelty types:
growers go for then uniformity of either seed or It was an amazing discovery to see what is out in the industry as novelty forms of this crop. My knowledge of potential cultivars went from about 5 to over 25 Crop timing – From seed to flower plan on about 6 colors and forms I had not heard of prior to months, from liner to sale it depends on the time of researching this article. In addition to many seed year but around 6 weeks for quarts and 8 weeks for produced forms including Benary Seed’s vegetative forms were also amazing. I encourage Growth regulators – For those of you more anyone who wants to learn more about these comfortable with Daminozide (5,000 ppm), or unusual forms to look for ‘Doppelganger’ where Daminozide and Chlormequat tank mixes (5,000 petals erupt from the top of the cones giving each ppm/1500 ppm) you can do it but you will doing blossom a “Mophead” and doubling the color impact multiple applications and stop as flowers emerge so of the flower. ‘Double-decker’ is just what the name you aren’t reducing flower size. For growers more implies with secondary flowers arising from the cone comfortable with Paclobutrazol a 30 ppm drench, or of the lowest bloom on the stalk, this hybrid looks a repeated 30 ppm sprays will work. Uniconazole will bit like a Leonotus with stacked flowers on each be less than 30 ppm for sprays, but remember the stalk. ‘Razzmatazz’ is what chrysanthemum rates and cultivars are all going to perform differently producers would call an anemone form with small depending on where you are in the country, so do petals entirely encasing the cone of the flower, so your own tests on which PGR works best for you. that it appears double but all inner petals are quite small. ‘Prairie Frost’ and ‘Sparkler’ are both Flowering – A note about vernalization – Most variegated types with single flowers, but the suppliers’ state that Echinacea do not require variegation is quite different in each case. The vernalization, but all will tell you 4-8 weeks at 40F variegated forms of Echinacea may need a little will give you a faster crop with more uniform more shade to protect the leaves from scorching flowering. That sure sounds like vernalization to me! under high light, they are also a little less vigorous This crop has such an interesting history of a market as a perennial, expanding into a market for Commercial Production guidelines for
medicinal use and now an explosion of new colors. Echinacea
The future of Coneflowers will never be quite the Fertilization – 75-150 ppm Nitrogen is usually sufficient. Avoid high ammonium forms as they will Commercial Sources for Echinacea:
Jackson and Perkins - http://www.jproses.com Monrovia Nurseries - http://www.monrovia.com Watering – Normal production irrigation is fine. ItSaul Plants - http://www.cone-crazy.com Media –All commercial peat lite media and bark peat mixtures work fine, pH optimum 5.5 to 7.0 for most Purdue University has a nice description of native cultivars. Slightly alkaline media is tolerated by http://www.hort.purduE.edu/newcrop/ncnu02/v5- Production Temperatures –Temperatures of 50-60F night and 70-75F daytime are adequate. Cooler Warm Climate Production Guidelines for Echinacea 2

Table 1: Cultivar Information
Cultivar
Suppliers
Novelty Forms
Tufted petals arise from top Veg Purple-Rose Species: E. angustifolia, E. atrorubens, E. laevigata, E. pallida, E. paradoxa, E. purpurea, E. sanguinea, E.
simulata, E. tennesseensis
--Note that there are at least another 30 cvs on the market, but their market share is much smaller and some
may be synonyms for the listed cvs.
Alexis A. Richardson is a contributing author with the Environmental Horticulture Department at the University of Florida. Warm Climate Production Guidelines for Echinacea 3

INFORMATION FOR THE PATIENT* legs or pelvis, then breaks off and travels to the lungs). Any of these can be fatal. At this time use of estrogens in the menopause is not WHAT YOU SHOULD KNOW ABOUT ESTROGENS known to cause such blood clotting, but this has not been fully studied and there could still prove to be such a risk. It is recommendedthat if you have had clotting in the legs or lungs