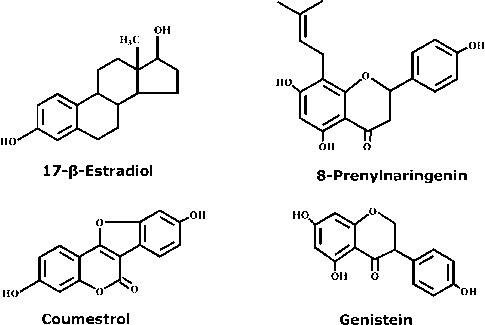 No part of this text may be reproduced in I N T E R N A T I O N A L
any form or by any electronic or mechanical means including information storage and re- trieval systems, without permission in writing Estrogenic activity of hop components
computer-based counting methods com-mon nowadays generally yield lowercounts than those determined under a mi- New scientific findings on
estrogenic activity of hops
toestrogens have in this process. Even apositive effect on fertility cannot be exclud- are being published
regularly over the last
■ Determination of estrogen activity
three years. This article
reports on the current
The studies of Koch and Heim (1) gave hops for the first time (1) though the active hops the reputation of being “the plant component was not definitively identified status of research and
richest in estrogen in our latitudes”. Since discusses possible
that time, many groups of researchers have tried to identify the estrogen-active com- not exclusive to hops. In 1998, it was isolat- consequences for beer.
ponents. This effect has been ascribed to ed for the first time by a Japanese group the following substances: β-acids, β-sito- from a tree species indigenous to Thailand sterol, o-hydroxy dibenzoyl methane, xan- been proven in a multiplicity of tests both“in vitro” (2, 3, 4, 5, 6) and “in vivo” (5, 6, 7).
8-prenylnaringenin is one of the most effec- been challenged. E.g. in recent times, no tive phytoestrogens hitherto isolated from estrogen effects were found by recognised ■ Effect of phytoestrogens
(4, 6, 8) and also for its conversion product influence on reproductivity is being dis- boiling in the brewing process. 8-prenyl- cussed. First indications stem from having naringenin is currently recognised as being ring in plants which, by interaction with observed a decidedly reduced fertility in the estrogen-active component of hops.
the estrogen receptor, can imitate or block the effect of the female 17-β-estradiol sexu- specific clover variety. One of the causes Biological estrogenic activity is initiated in the target cells e.g. mammary gland or (Fig. 1). At the beginning of the 90s, it was uterus by highly affine receptor proteins.
For testing a substance “in vitro”, such re- supposedly halved in recent decades. It is ceptor cells are isolated and then the inter- actions compared to 17-β-estradiol meas- ured in so-called “receptor tests” or “DNA bonding assays” (Fig. 1). Validation is car- 17-β-estradiol production decreases.
for prevention of chronic diseases arepostulated. This assumption is primarilybased on epidemiological investigations.
Compared to Western countries, Asia e.g.
Japan has a lower rate of chronic diseasessuch as cancer and cardiovascular prob-lems. This is ascribed to the different diet.
In Japan, with a diet traditionally rich insoy, up to 100 mg of phytoestrogens perday are ingested whereas intake is lessthan 1 mg per day in Western countries.
Fig. 1
Author: Dr. Martin Biendl, Hallertauer Compounds with
an estrogenic
effect

No part of this text may be reproduced in I N T E R N A T I O N A L
any form or by any electronic or mechanical means including information storage and re- trieval systems, without permission in writing Concentrations (%, air-dry) of 8-prenylnaringenin and xanthohumol
in various varieties of hops (9, 12)
ried out by so-called “reporter gene as- GC MS (10) or HPLC MS (9, 11) while e.g.
says” in which the activity of receptor en- outcomes of the various “in vitro” testshitherto published (2, 3, 4, 5, 6), 8-prenyl- is the only source making a contribution to 8-prenylnaringenin present in beer. Track- mestrol or genistein (factor 10 – 100). All studies also concurred that the effect of 8- dosed with hop pellets (variety: Hallertau prenylnaringenin is clearly lower than that Magnum), Tekel at al. (10) noted a yield of of 17-β-estradiol (factor about 100).
17% in the finished beer. These authorsalso report on analyses of a number of beer types (17 Belgian beers, 12 beers from oth- been confirmed in several animal trials.
er countries, 3 test beers). They found a The most frequently used test methods for “in vivo” determination of active estrogen tion of 0.02 mg/l. Investigations by Rong et agents are based on changes in the uterus al. (9) of 8 different Belgian beers (6 ales, 2 subcutaneous dosing of 30 mg/kg/day, rats mg/l. Stevens et al. (11) determined a level of 0.24 mg/l in an American porter from a of 0.01 mg/kg/day of 17-β-estradiol (7). Ac- cordingly, 8-prenylnaringenin proved to be er breweries (4 US major brands, 4 import- less effective than 17-β-estradiol by a factor ed beers) had clearly lower concentrations of 3000 in this “in vivo” trial. Another trial (0.07 mg/l in an imported stout, the remain- involving rats (6) showed a difference in activity of about 20,000 (6). A trial involvingmice (5) concluded that typical estrogenic ■ Has beer estrogenic activity?
effects arise as of oral ingestion of about 15mg of 8-prenylnaringenin per kg body weight and day, the substance having been administered in drinking water in a concen- the effective quantities of 15 and 30 mg of 8-prenylnaringenin per day and kg of body ■ Occurrence of 8-prenylnaringenin in
weight determined in animal trials, it would hops and beer
follow that humans would have to con-sume more than 1000 l of beer daily to achieve detectable estrogenic effects.
very low. The concentration is below 0.01%and thus e.g. about 100 times lower than largely in line with conclusions drawn by Sauerwein and Meyer in their studies (13) strate-specific determination of estrogenic ject. Results have been published only by activity of beer. In this test, the substances Rong et al. (9). 8-prenylnaringenin, as a pre- with estrogenic activity were not singled out through structure-specific properties exclusively found in the lupulin glands of table compares the levels of 8-prenylnarin- been identified at that time), but through the potency of the sample as a whole (or an extract recovered from same) to dock at anestrogen receptor. The concentrations of substances with estrogenic activity found of 8-prenylnaringenin is very time and la- in the samples were given as 17-β-estradiol equivalents. A maximum value of 2 µg/l was established for beer. Sauerwein and Meyer

No part of this text may be reproduced in I N T E R N A T I O N A L
any form or by any electronic or mechanical means including information storage and re- trieval systems, without permission in writing concluded: “For evaluation … the daily with the receptor for 17-β-estradiol. As a dose of about 2 mg of estradiol-17-β effec- result, positive effects on health are being beer”, Poster read at the “15th Internati- tive in humans should be used as a basis: In order to get to this, about 1000 l of beer oporosis and cardiovascular diseases, use oid Biochemistry & Molecular Biology” this it follows that the presence of sub- ative effects (e.g. on reproductivity) dis- stances with estrogenic activity in beer and cussed. Hops contains 8-prenylnaringenin, wa, A., Fukuda, C., Iijima, Y., Sugano, M., its raw materials can be detected analyti- cally but the concentrations found are far hitherto known. However, the levels, less than 0.01 %, are very low. Traces of 8-pre- (Part 2): Estrogenic effects of 8-isopen- expect a hormonal effect in consumers.” nylnaringenin found in beer can be traced Planta Medica 64, 516 – 519, 1998.
Promberger et al., in their studies pub- 8. Gerhauser, C., Alt, A., Heiss, E., Gamal-El- lished in 2001 (14) on substrate and struc- various groups of researchers are in agree- I., Scherf, H.-R., Frank, N., Bartsch, H., tests, came to even lower 17-β-estradiol equivalents per litre of beer than Sauer- monal effect, despite the presence of the lent to 0.043 µg of 17-β-estradiol per litre of cer Therapeutics 1, 959 – 969, 2002.
beer was determined in a range of Austrian 9. Rong, H., Zhao, Y., Lazou, K., De Keuke- ■ References
leire, D., Milligan, S. R., Sandra, P.:“Quantification of 8-prenylnaringenin, It can be concluded from these investiga- 1. Koch, W., Heim, G.: “Hormone in Hopfen a novel phytoestrogen in hops (Humu- tions that the estrogenic activity of hops, und Bier”, Brauwissenschaft 8, 132 –
lus lupulus L.), hop products and beers, from an objective point of view, does not 2. Milligan, S. R., Kalta, J. C., Heyerick, A., effects on beer. Reports such as on “femini- 51, S. 545 – 552, 2000.
sation” of beer drinkers cannot be proven re, D.: “Identification of a potent phyto- 10. Tekel, J., De Keukeleire, D., Rong, H., estrogen in hops (Humulus lupulus L.) and beer”, The Journal of Clinical Endo- crinology & Metabolism 83, 2249 –
cance: In Asia, up to 100 mg of phytoestro- gens is ingested every day without observ- 3. Kitaoka, M., Kadokawa, H., Sugano, M., trometry”, J. Agric. Food Chem. 47,
ing negative concomitant phenomena (e.g.
Ichikawa, K., Taki, M., Takaishi, S., Iiji- on reproductivity). On the contrary, posi- ma, Y., Tsutsumi, S., Boriboo, M., Akiya- 11. Stevens, J. F., Taylor, A. W., Deinzer, M.
tive effects on health are noted. With this in L.: „Quantitative analysis of xanthohu- garded as a means of increasing ingestion of phytoestrogen which, at only about 1 mg and initial study on its structure-activi- a day, is low in Western populations com- ty relationship”, Planta Medica 64, 511
Journal of Chromatography A, 97 – 107,
pared to Asia. This is called for by some doctors and dieticians. It might thus even 4. Milligan, S. R., Kalta, J. C., Pocock, V., 12. Biendl, M.: “Untersuchungen zum Xan- be conceivable that, in future, increasing 8- Van de Kauter, V., Stevens, J. F., Deinzer, M. L., Rong, H., De Keukeleire, D.: “The objective in developing new beer types.
nin and related hop (Humulus lupulus 13. Sauerwein, H., Meyer, H. H. D.: “Erfas- campaigns, it is advisable to wait for fur- L.) flavonoids”, The Journal of Clinical ther results from very active current re- Endocrinology & Metabolism 85, 4912 –
search on biological activity of 8-prenyl- Monatsschrift für Brauwissenschaft 50,
naringenin before a definitive profile of the 5. Milligan, S., Kalita, J., Pocock, V., Heye- 14. Promberger, A., Dornstauder, E., Früh- Keukeleire, D.: “Oestrogenic activity of ■ Summary
ringenin”, Reproduction 123, 235 – 242,
means”, J. Agric. Food Chem. 49, 633 –
6. Schaefer, O., Hümpel, M., Fritzmeier, K.- in plants, can have an influence on the hu- H., Bohlmann, R., Schleuning, W.-D.: “8-

ASSIGNMENT 2 for Marianna Marra The dataset ear.dat is based on 214 children with acute otitis media (OME) who participated in a randomized clinical trial (Mandel et.al., 1982,Pedriatic Infectious Diseases, 1, 310-316). Each child had OME at the beginning of the study in either one (unilateral cases) or both (bilateral cases) ears. Each child was randomly assigned to receive a 14-days cours