Correspondence: Letter to BCH
The Review Team and CEO Sarah-Jane Marsh state that;
“the cardiology team had failed to consider the respiratory problems Hayley had whilst on
PICU and put these into context with her present problems”.
“The Investigation has highlighted there was an incorrect perception amongst the cardiology
doctors that a patient needed to demonstrate 5 criteria, in order to be considered for
admission to PICU.
This is not the case as patients are admitted for a range of critical conditions based on their
overall condition.
RCA Outcome
“The patient should have been referred to PICU for review on 10 November 2009.
Early commencement of pressure support could have prevented the patient’s death”.

The information presented to me is straight forward.
The cardiology team failed and Hayley could still be alive today if they had done their job
properly.
Ben Anderson was part of that team of cardiology doctors who failed Hayley.
CAN YOU EXPLAIN YOUR JUSTIFICATION IN CALLING HIM AN OUTSTANDING DOCTOR?
From Friday 6 November – 9 November 2009, my parents repeatedly told Ben that
something was seriously wrong with Hayley.
He continued to deny that anything was wrong with Hayley and insisted that she was fine.
“the review team noted that an increasing need for oxygen 3 weeks after her surgery should
have raised clinical concern”
Ben insisted Hayley was “FINE”.
On 8 November 2009 – 11.00
WR Dr Anderson
“Armiloride 0.1 mg/kg BD
Frusomemide 1 mg/kg TDS
Gaining weight”
GAINING WEIGHT

Hayley was gaining weight because her heart was failing.
Retaining fluid is one of the most obvious signs of heart failure.
She didn’t have the energy to eat from Friday 6 November 2009.
She hardly opened her eyes.
LUNGS

What about her lungs.
Hayley’s X-ray proved she had massive consolidation left lung volume loss right lung. The
chest x-ray was taken at 11.00 am on Monday 9 November 2009.
Massive consolidation doesn’t suddenly happen.
Why did Ben not pick up on it?
FUROSEMIDE
Ben told Byronny Winnal that
• Her medications were unchanged
Ben changed Hayley from 6 mg/kg TDS to 1 mg/KG TDS
This is careless and dangerous.
Dr Stumper – should this not raise concerns over his clinical practice?
Hayley had deranged LFT and her urine output was dependent on her diuretic management.
She had been weaned to 3 mg on intensive care but then was increased to the maximum
dose of 6 mg/kg.
Hayley was on 6 mg/kg of Furosemide from 14 October until 4 weeks after her operation on
11 November 2009.
When I first read the notes I was horrified and thought that was why Hayley died because
her diuretic furesemide was dropped too quickly. Her support was taken away by Ben
Anderson.
The excess fluid in her body couldn’t be expelled and therefore the workload on her heart
was increased.
Her lungs were filling up with fluid and she just couldn’t cope with trying to get rid of a great
wall of fluid.
Hayley did have these problems but it was not made worse by Ben’s instructions and
changing her meds.
WHY?
Because when I checked the drug medication chart it was still 6 mg/hr.
Ben’s own colleagues ignored his instructions.
WHY?

Because it was dangerous?
What do you think Dr Stumper? Would you drop from 6 mg to 1 mg suddenly?
Hospital Investigation states;
“Hayley began to clinically deteriorate on 9 November 2009”
But Ben Anderson told the Grand Ward Round on Monday 9 November that;
“Hayley was FINE”.
It was only because Hayley’s granda interrupted the Ward round and said,
“excuse me, this child is not fine” that the chest x-ray and blood gases were ordered.
Dr Stumper asked for SHO Niddi to organise Liaison with Dr Casey in Belfast in regards to
sending her back to Ireland.
The RCA Investigation Report says;
Ben Anderson
“had few contacts with this patient and none were within the last days of her life”.
THIS IS NOT CORRECT
Ben saw Hayley
Friday 6 November 2009
Saturday 7 November 2009
Sunday 8 November 2009
Monday 9 November 2009
Hayley’s grandad Edward Stevenson asked Ben three times
“Is Hayley’s condition life threatening? Does she require further surgery?”.
Hayley died on Wednesday 11 November 2009
He last saw Hayley on 9 November 2009.
You do the math.
Ben did see Hayley within the last days of her life.

The Investigation Team state;
“Ben Anderson is an outstanding doctor …in his communication”.
If any of you believe that it is outstanding to tell a mother her child was FINE. and 26 hours
afterwards she died and was lying in a morgue, then you have no value or respect for the life
of an innocent child.
Does anyone stop to think before they put pen to paper, how callous remarks like this impact on the surviving family? How can anyone of you justify or condone this type of behaviour? Can you explain your logic in supporting this behaviour? Can you tell me how you would feel if you were told by your doctor that your child was fine after they died”? To make matters worse, Ben said exactly the same thing to my mother only minutes after Hayley died. You could hear her wailing on the ward. She had just found out and had seen Hayley’s lifeless body, she wandered like a wounded animal down the corridor to ask at the nurses station what had happened to Hayley. She walked straight into Ben and said, “Ben, Hayley’s dead. You’re walking down that corridor to look after all those sick babies and our wee Hayley’s dead. Ben replied, “I’m only after finding out” Mum said, “What happened to Hayley?”. Ben replied, “Hayley was FINE”. Nothing else, no sympathy, condolences, NOTHING. Mum wandered to the nurses station. She saw Junior Sister Sheila Bennett who lied and said Hayley had a cough and a cold and shut Hayley in ISOLATION. She didn’t lift her head and kept writing when Mum asked, “Hayley’s dead. What happened to Hayley?”. Sheila replied, “It happened at the change of the shift. I don’t know”. Mum asked, “Is there anyone who can tell me what happened?”. Sheila replied, still writing not lifting her head. “A doctor will be along later”. Then turned her head away and kept writing. No condolences, sympathy NOTHING. IS THIS THE BEST YOU CAN DO? IS THAT IT? WOULD IT HAVE KILLED THEM TO OFFER THEIR CONDOLENCES? THERE APPEARS TO BE A SICKENING TREND. All the way from the junior staff through to the doctors, through to the Investigation Team, all the way up to the C.E.O. Sarah-Jane Smith. There is a cancer in your organisation. A complete lack of empathy, decency and humanity. THIS MUST CHANGE. That is why I have developed. H.E.A.L. – Hayley’s Early Awareness Lifeline. 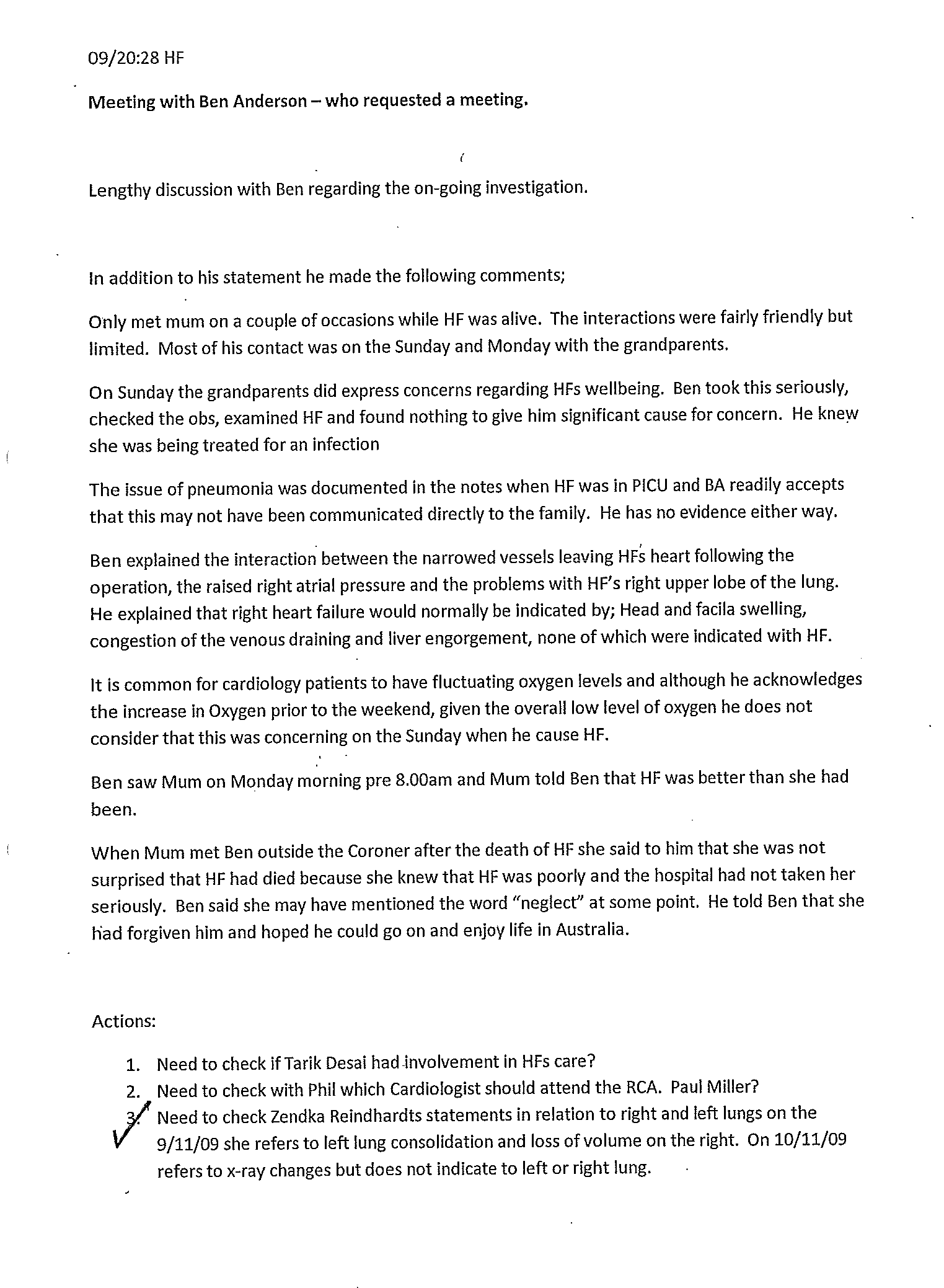 Correspondence: Statement
Correspondence: Paula Stevenson Statement
I expressed my concerns to all of the staff on Ward 11 after Hayley’s
death and I demanded answers but no one could explain. I even spoke
with Dr Ben Anderson and asked him why nothing had been done
sooner. Again, all he could say was Hayley was fine. His words
absolutely failed me. I could not believe that he was still insisting
Hayley was fine. I told him, ‘Ben, Hayley is dead. She’s lying in the
morgue.’ I said to him that she couldn’t be fine and he did not offer any
condolences or sympathy.

Correspondence: Sylvia Stevenson Statement
I waited until Dr Ben Anderson came to do his round and for the first
time I decided to speak up and ask him some questions about Hayley’s
condition. I asked how much danger Hayley was in, did she need more
surgery, what can we do to help Hayley, as she was by this time head
bobbing. I was unaware at this time that head bobbing in a child means
they are in severe respiratory distress. Dr Ben Anderson assured me that
Hayley was fine and he explained that he had seen children with much
worse head bobbing in the past. He said it was probably due to the fact
that she was so small and had spent a lengthy period of time in paediatric
intensive care unit. He informed me that her body was fighting off the
chest infection so just going to take her a bit longer to get better and there
was nothing to worry about. Against my instincts, I believed him and
trusted that he knew what he was talking about, although it was plain to
see that Hayley was suffering.

Correspondence: Official Complaint Letter
During the week before Hayley died, my dad Edward Stevenson asked Dr Ben Anderson on
three separate occasions “were Hayley’s problems life threatening, would she require
further surgery to make her better” Dr Ben Anderson was very adamant “No, her condition
wasn’t life threatening and she wouldn’t require any further surgery”. Dad kept asking and
persisting because Hayley’s condition was deteriorating, he also asked two other doctors the
same question. They all reassured him Hayley wasn’t in DANGER. He asked this question 6
times in total over a 7 day period.
Monday 09/11/09
WARD ROUND:
Dr Ben Anderson told his colleagues that Hayley was FINE. My Dad stood between Dr
Stumper and Dr Anderson and said “excuse me, the child is not FINE”